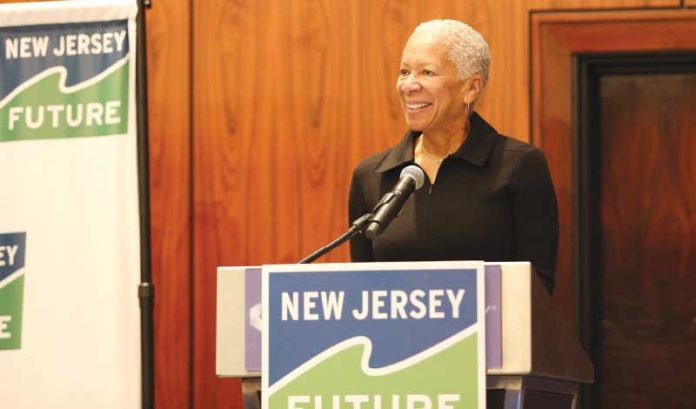 Advocates fought to eliminate smoking on planes to protect flight attendants — and everyone benefited from it.

Advocates fought to mandate seat belt use in cars to protect children — and everyone benefited from it.

Advocates fought to cut curbs where they reached intersections to help the disabled — and everyone benefited from it.

What does all this have to do with business? Everything.

So said Angela Glover Blackwell, founder in residence at PolicyLink, a policy advocacy think tank she formed in New York in 1999 to encourage the use of public policy to improve access and opportunity for underserved, low-income communities of color, especially in the areas of health, housing, transportation and infrastructure.

Glover Blackwell, the luncheon keynote speaker at the recent New Jersey Future Redevelopment Forum in New Brunswick, wowed the sold-out crowd with her thoughts — and stats — on how public policy can create racial equity in the state and the country. And everyone will benefit.

“When we focus with nuance and specificity on those who are being left behind, the future gets better,” she said. “I call it the curb cut concept.

“The lesson of the curb cut is, when you solve a problem for the most vulnerable, you help everybody.”

Including the bottom line.

Just as having more women on boards and in positions of power has been statistically proven to produce better financial results (don’t get us started), Glover Blackwell said her research shows that the country is leaving money on the table by failing to eliminate racial inequity in employment.

“If we were just able to get rid of the racial disparity in employment and wages nationally, the GDP in 2015 would be $2.5 trillion higher. In New Jersey, it would be $97 billion higher. That is the equity dividend, and we need that,” Glover Blackwell said.

Stat No. 1: The entrepreneurs of today.

“When you think about what drives capitalism, it is innovation,” she said. “People who are Asian, Latino and African-American are three times as likely to start a small business as people who are white.

“The very thing we have isolated is what we’re going to need for the nation to thrive.”

The country has tapped into this before.

Stat No. 2: The entrepreneurs of the “Greatest Generation.”

“The would-be gold standard of the curb cut effect would be the GI Bill,” she said. “I say ‘would be’ because it was administered in a discriminately racist fashion. People who were black didn’t have the same access to it, because local people got to make the rules. But it would be the gold standard because the GI Bill made the white middle class.

“There were 16 million returning veterans. A couple people thought they might need a little help to get back into society, so they designed the GI Bill and thought maybe 100,000 veterans might use it. Eight million used the education benefits alone, and a large number used the mortgage benefit.

“The suburbanization of America was fueled by the GI Bill. There’s no question it went to the making of the white middle class.”

Now is the time to do it for people of color, she said.

And she said this after detailing the statistics to show that people of color will no longer be able to be called minorities very soon.

“You’ve been hearing for some time that, by 2050, we’ll be a nation where the majority of people are people of color,” she said. “That date is now 2044. It’s not news anymore. What is news to people is how much we have changed already.

Here’s how Glover Blackwell feels it should be written.

“What we need is equitable development,” she said. “We need to develop in ways where we consciously try to reduce regional and local disparities.

“Think of development as producing a triple bottom line for people, the economy and the environment. And think about development being done completely in partnership with people who need to have their voices influence what happens so it will actually benefit them.

“If we develop that way, we get to counter the harm that has been done. And, when you do it that way, you get the curb cut effect, you end up benefiting everybody.”

She had the audience nodding in agreement. Afterward, they came up, one by one, to salute her talk and her ideas.

Of course, this is nothing she hasn’t seen for 20 years. And, still, the problem exists.

I asked her: How do we go from a presentation to an implementation?

It’s a question, she said, with an easy answer.

“It’s not like we don’t know how to solve these problems,” she told me. “We do. We just have lacked the political will to do it. And we had lacked the kind of solidarity of working together to do it.

“It takes a leadership team to say, ‘We’re excited about what Angela Blackwell said, let’s think about the development process that we were about to undergo and ask: What are the equity goals and how are we going to achieve them?’

“We need to use the plans that are on the shelf.”

New Jersey, she said, can be a leader. It needs to be, she said, because New Jersey will be one of the first states to become majority minority.

“What New Jersey needs to do now is double down and start doing some things differently,” she said. “New Jersey is well-positioned to become a beacon for the nation, because the whole nation is going to come where we are.

“By the time the nation gets there, we should have some ideas and examples for them.”

We can start by telling them about the cuts in the curb.

Centenary launches set of courses to prep for CFP exam