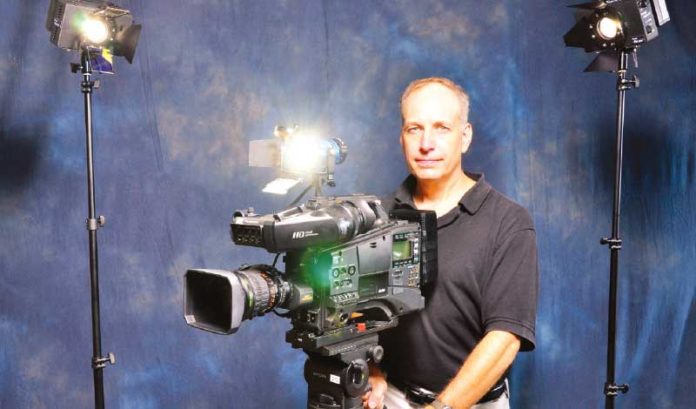 As the world watched the trial of former Iraqi leader Saddam Hussein that led to his execution, there was, in the unlikeliest of places, the presence of a local family business outside the frame.

In fact, a Garden State family business with only about a dozen employees was in large part why the world was able to watch. The business, Hawthorne-based Frezzi, provided the lighting, cameras and even robotic control systems used by news networks covering the trial.

It was a historically significant moment that the company’s equipment helped capture, but also not the only one over its more than 70 years of providing tools to broadcast news stations.

Because, even if you’re not familiar with the name, products made by Frezzi, or Frezzolini Electronics Inc., have been a staple for virtually every major television network and cable station for a long time.

Kevin Crawford, a vice president of engineering at Frezzi whose grandfather founded the company back in the 1940s, said that’s all thanks to word of mouth.

“Early into the company’s history, there just wasn’t anyone else doing what we were doing,” Crawford said. “And the broadcast industry was a small industry at the time — everyone knew everyone else. So, we formed tight relationships with every station as it came online: CBS, NBC, Fox, ABC.”

Crawford’s grandfather was an Italian immigrant who went from working at a printing press for the newspaper industry to becoming the first cameraman at one of the country’s first broadcast news outlets.

“He didn’t like the stress of that job because, if you missed the shot, you’d be in trouble,” Crawford said. “So, he ended up moonlighting as the person making lighting equipment for those guys instead. He had mechanical skills from working on the printing press; he knew how to make portable lighting and batteries.”

The company fed the growing broadcast news industry as it grew, supplying all the networks and stations with increasingly advanced products. Over the years, the company’s lighting products in particular became like what Kleenex is to facial tissues.

“Barbara Walters was interviewed and was asked, ‘How do you do a good interview?’ She said all it takes is a cameraman, a camera and a Frezzi,” Crawford said. “We’ve become a branded name for portable lighting in this industry. It’s a reputation we still have. Anyone who has been in the industry for a while knows us.”

That said, broadcast journalism is changing all the time. As Crawford explained, the industry has started bringing in a lot of young multimedia journalists in place of seasoned news cameramen and photographers.

“Now, 24-year-olds with camcorders are being sent out to shoot, edit and produce media content like one-man bands,” he said. “Their equipment needs are different — they like to travel light. So, we’re adapting our product to that market as well.”

More news content migrates to online platforms every day. And amateur video journalists have, in some cases, started to encroach on the market share of traditional broadcast media.

Regardless, Crawford said, the company is still dedicated to making products for professionals and the high-end broadcast market. It isn’t trying to compete with inexpensive products found on the consumer side, the tools more often used by the new do-it-yourself internet media creators.

That reluctance to step down the quality and price of the products was tested about a decade ago, when, according to Crawford, a lot of big networks and stations started cutting staff for freelancers and purchasing bargain alternatives for their equipment needs.

“Stations tried to go the cheaper route, and it failed miserably,” he said. “The news is outdoors, in all weather conditions, where a consumer product isn’t going to hold up. …  When you see Geraldo (Rivera) hanging onto a street sig

n horizontal from a hurricane, our light is right next to him.”

Frezzi’s products are made in local machine shops with materials matching the durability of aircraft aluminum. It’s rough and tumble — and still the go-to for all major broadcasters.

“The pros know the difference, and that’s what keeps us in business,” he said. “In this industry, you learn fast what it costs to miss a shot.”