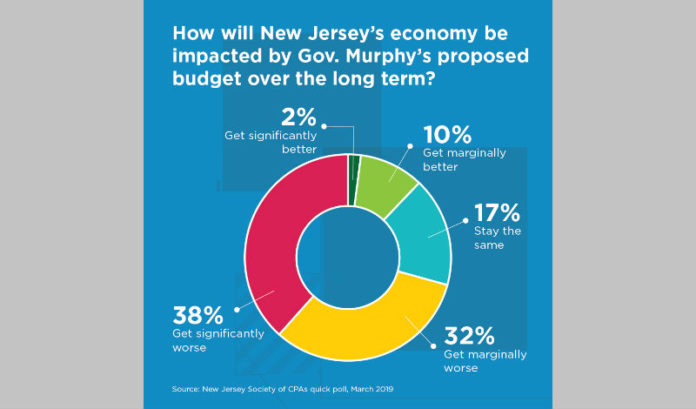 Gov. Phil Murphy’s proposed budget will hurt the state’s economy over time, according to 70 percent of nearly 500 CPAs polled by the New Jersey Society of Certified Public Accountants earlier this month.

“Surveys like these show the true mindset of the business community in New Jersey. CPAs, as trusted advisors, are at the forefront of helping businesses grow, innovate and operate more efficiently,” Ralph Albert Thomas, CEO and executive director at NJCPA, said.

Of those who responded negatively, most cited Murphy not focusing enough on the spend of public pension benefits in his budget proposal; high property taxes for residents and businesses; and the implementation of the millionaire’s tax.

Of those who responded positively, most cited the governor’s plan to increase state funds from high income taxpayers; the need to reduce health care costs; and the proposed tax revenue from the sale of recreational marijuana.