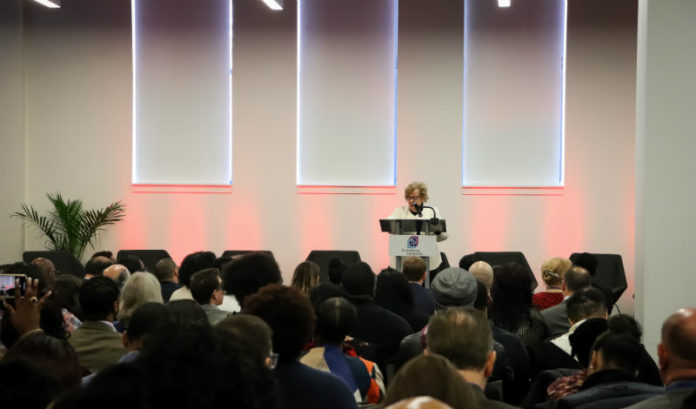 The Diversity in Film and Television Production Forum on Wednesday in Newark brought together not only state and local officials and key industry players, but numerous educators and community artists from across the state to discuss the future of the film and television industry in New Jersey.

It was exactly the sort of thing Express Newark, the new 50,000-square-foot arts incubator within the recently renovated Hahne & Co. building, was intended for, Anne Englot, co-director of Express Newark, said.

“We’re pleased to welcome you here to Express Newark, Rutgers University-Newark’s community-based arts collaborative,” Englot said to the hundreds of attendees at Wednesday’s forum. “Express Newark is a ‘third space,’ an arts center and incubator in which the university and the community can come together like this to have an equal voice and share in creative practices.”

Conceptualized as an interdisciplinary learning space, Express Newark not only houses Rutgers University-Newark’s video, photo, design and art classes, as well as the university’s Scarlet Magazine, but also will provide services such as 3-D printing, photography and video production facilities, art gallery and exhibition spaces, conference rooms and more for those artists and community residents collaborating, experimenting and innovating in partnership with Rutgers-Newark faculty, staff and students.

“Express Newark is a space committed to social justice realized through the arts,” Englot said. “We are committed to building an architecture of inclusion to honor Newark’s artistic history and imagining an America where resources and power are shared.

“We are committed to transforming the narrative of our city to be a place where talent is seen and heard and can prosper and profit from both Newark and New Jersey’s renaissance.”

Gina Marie Rodriguez, founder and executive director of Big Dreams and Silver Screens in Westfield, said she attended the forum to connect with diverse filmmakers across the state.

“Big Dreams and Silver Screens, the organization responsible for the Westfield International Film Festival and the Big Dreams Youth Film Festival, seeks to support and promote the success of women and minorities across an intersectional space, and I am so glad to see that New Jersey is following suit,” Rodriguez said. “The Film and Digital Media Tax Credit Program, with the addition of the Diversity Tax Credit, has been a long time coming, and I am so thankful to Sen. Loretta Weinberg and those who fought tirelessly on behalf of the program.

“Forever a Jersey Girl, I am very proud that our state is taking the appropriate steps to create a welcome space for a diverse and inclusive environment within the film industry.”

Victor Davson, co-director of Express Newark, said it is imperative that arts incubators, artists and supporters of the arts, state and local officials all work together to make diversity and inclusion a key component of the film and television industry moving forward.

“If, like me, you came of age in the ’50s and early ’60s, you may have wanted to be (cowboys) like Gary Cooper or John Wayne, but, in January of this year, you heard what inclusion and diversity actually sounds like when the Academy announced its Oscar nominations,” Davson said. “If those of you who are old enough to remember Tarzan, played by the Hungarian Olympian-turned-actor Johnny Weissmuller, wanted to swing through the African jungle, but then watched the 91st annual Academy Awards in February, you saw what diversity actually looks like.

“If the names Gordon Parks, Harry Belafonte, Sydney Poitier, Eartha Kitt, Dorothy Dandridge, Ruby Dee, Artie Davis and Foxy Brown mean anything to you and you witnessed the pageantry of the Oscar awards in 2019, you definitely experienced what Express Newark has been working to unleash — the pent-up creativity and innovation that festers in exclusion when dreams are deferred.”

In addition to his support for the Film Tax Credit Program signed into law by Gov. Phil Murphy last summer, Davson credited Rutgers-Newark Chancellor Nancy Cantor for her part in the creation of Express Newark.

“Express Newark is the cornerstone of a new and inclusive infrastructure originating in the leadership and social activism of somebody who arrived in town five years ago, Chancellor Nancy Cantor,” he said. “Our work here at Express Newark, in collaboration with the Newark Office of Film and Television, is to place Newark at the forefront, where it belongs, of inclusion and diversity in the film and television industry.”

Read more from ROI-NJ on the forum: