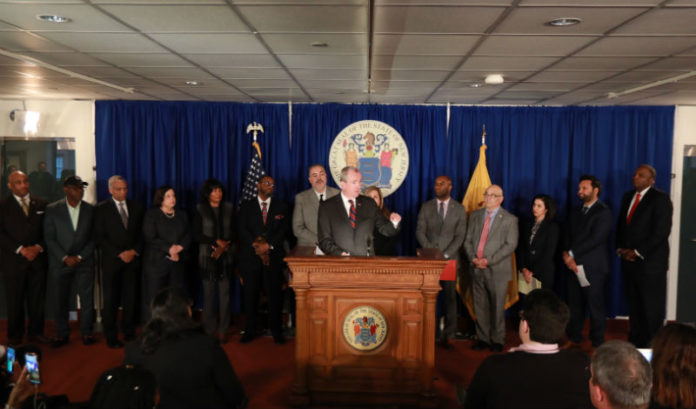 As the vote for a package of bills to legalize marijuana nears, Gov. Phil Murphy rallied for additional support Thursday focusing his efforts on expungements of prior records.

The package of bills, which address the business of legal marijuana, expanding medical marijuana and expediting the expungement of records related to marijuana possession and use, are up for a vote in both the full Assembly and Senate on Monday.

Whether or not there are enough votes to pass remains to be seen.

African American Chamber of Commerce of New Jersey President John Harmon said the expungement piece is particularly important for the potential effect it can have on the state’s already diverse workforce.

“Being the most diverse state in America, this is the time to really leverage the diversity of this state to do something good, and not … just have a conversation,” Harmon said at the event.

In fact, forgiving the prior transgressions at this juncture will affect the lives of roughly 200,000 individuals in the state, according to Murphy.

The irony is in the opposition the bill is receiving from those who see the bill as not going far enough to ensure equality is reached.

“I think it adds profound implications form political perspective, because, one, more people will start participating in the electoral process, and, two, putting that talent to work, to strengthen New Jersey’s economy, considering lot of job opportunities in the marketplace — with the right training and support for these individuals — it would improve the overall competitiveness of the state,” Harmon told ROI-NJ after the event.

The bill does include legal support for those seeking expungement and has a workforce training component, Murphy said at the event Thursday.

Legislators holding back their support for the bill have said there is no assurance, despite the call for the creation of an electronic system, that the expungements will be expedited — especially if the judicial system cannot handle the anticipated influx.

Others in opposition are calling for an automatic expungement altogether.

That is not possible, according to Murphy and Assemblywoman Annette Quijano (D-Elizabeth).

Harmon said it places a burden on those victimized by the system, but it can’t be helped that the judicial system is not up to 21st century standards.

“It is a huge mess, but my hope is that if we can bring the system to 21st century standards and work through those trying to get expungement relief … that this process should get to be more efficient,” he said.

For now, all eyes are on Monday’s vote, which has been called precedent-setting and historic by the governor.

Murphy said no other state has passed bills that focus on the communities most hurt by the war on drugs, such as the expungement piece, and the licensing of minorities and hiring of minorities for the cannabis business.

“If we get the package done, we will set the standard,” Murphy said. “That whole package has never been done before in the history of the U.S.”