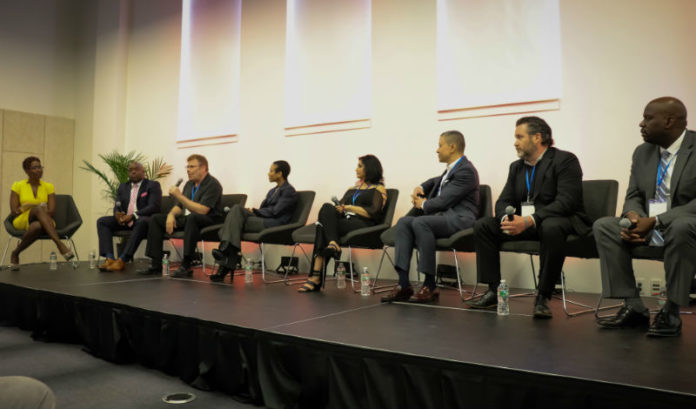 The reinstatement and bolstering of the Film Tax Credit Program, signed into law by Gov. Phil Murphy last summer, not only will result in direct dollars for the state via film and television productions, it also will help to give women and minorities more access to the industry.

So said the many state and local officials and film and television industry leaders who spoke at the Diversity in Film and Television Production Forum last week in Newark.

“Diversity is going to make for better productions and also is economically attractive due to the 2 percent increase in film tax credits,” state Sen. Loretta Weinberg (D-Teaneck) said.

The program, run by the New Jersey Economic Development Authority, aims to rejuvenate New Jersey’s film industry by providing a 30 percent tax credit against corporate business tax and gross income tax for qualified film production expenses and a 35 percent credit for goods and services purchased through vendors located in targeted areas of the state.

It also extends an additional 2 percent credit to those companies who develop a diversity and inclusion plan for the recruitment and hiring of at least 15 percent women and minority persons in their productions.

“I don’t think hiring just 15 percent women and minorities is nearly enough, but that’s where we start,” Weinberg said.

Hester Agudosi, chief diversity officer with the New Jersey Office of Diversity and Inclusion, said she recognizes how important it is for younger generations to be able to see themselves on screen.

“I feel like an invisible person,” Agudosi said. “I am a woman of color over a certain age and I do not see myself in any of these Hollywood depictions.”

Despite the progress made over the last two years with productions such as “Black Panther,” “Crazy Rich Asians” and “Wonder Woman,” according to the 2018 Hollywood Diversity Report, not even two out of 10 lead actors in film are people of color.

Behind the camera, things are no better, with less than one out of 10 film directors being female — and the majority of industry gatekeepers remaining white men, Craig Robinson, executive vice president and chief diversity officer for NBCUniversal, said.

“For example, there are very few top-tier black, Hispanic or Asian agents, and part of the reason is because of the inequities within this country,” Robinson said. “These talent agencies expect young people to work for insignificant wages because these jobs are in very high demand.

“But people of color, especially those who perhaps were the first in their family to go to college, are graduating with enormous college debt and cannot afford to work for free.”

The pressure needs to be coming from “up, down and sideways,” Robinson added, in order to increase diversity in the industry.

“A (minority) gatekeeper is going to see merit in a project that someone who does not come from that world may not,” he said.

“Most of the projects I work on focus on the skills of women rather than their appearance,” she said. “I also try to work on projects most often concerning social and global issues, including diversity, animal and human rights and environmental protection.”

Jeff Gomez, CEO of Starlight Runner Entertainment, has worked to expand story universes such as “Pirates of the Caribbean,” “Star Wars,” “Spider-Man,” “Men in Black” and “Transformers” across multiple profitable platforms, including toys, video games and mobile applications.

“Being open to diverse perspectives and different ideas from young people coming out of nowhere allowed United Talent Agency to recognize myself and Starlight Runner and put us into the same room with studios such as Sony, who recognized that these diverse perspectives were going to be good for ‘Spider-Man’ and ‘Men in Black’ and the like,” Gomez said. “We are gaining self-efficacy and self-determination because our voices are becoming louder through social media that almost forces them to recognize our input and start integrating it.”

“We didn’t do so under the pressure of hashtags or boycotts — we did it because multiculturalism is good business,” Gibson said.

Five years ago, many studios did not have any such programs nor executives working on these issues, he said.

“Now, every last one of our six and Netflix have someone working holistically throughout their studios with talent development, with production and with the greenlighting committees,” Gibson said. “Also, if you look at last year, 19 major films were helmed by black directors and three by women. This year, every major studio, at minimum, will have a woman directing a major film. That is progress.

“We all recognize we have a long way to go — but you still race toward what you cannot see.”

Jennifer Turner, senior vice president of scripted programming for Sony Pictures Entertainment, said it is her job to make sure that representation both on- and off-screen is as diverse as possible.

“At Sony, we want to do great business by telling great stories, and part of great storytelling is emotional resonance, which comes from authenticity and actual experience,” Turner said. “So, I ask, are we booking female directors or directors of color? Are we including diverse writers on our staff?

“The studios and networks are now saying, ‘We want diverse talent,’ and many are even mandating their staffing lists be so — putting pressures on agencies to then represent that talent.”

Clint W. Grimes, executive director of global sourcing and supplier diversity for Warner Media, said the hiring of talent for its television show “Queen Sugar” was quite deliberate.

“Of the 42 episodes over its past three seasons, every installment has featured a woman in the director’s chair, and we are currently in production for season four,” Grimes said. “We also are responsible for ‘Wonder Woman,’ the first major superhero tentpole film to be directed by a woman with a large female cast, and for showcasing an incredibly underrepresented community in ‘Crazy Rich Asians.’ We are very proud of this.”

Robinson said it is important that producers, directors and writers consider how they are casually including diverse characters in their scripts and casting.

“For example, audiences want to see a large woman in a story who is not an object of derision or a punchline, but, rather, a multidimensional character who also happens to be a large woman,” Robinson said. “Having a gay or trans character in your film doesn’t get you points if it’s a trope or a stereotype, but it’s (OK) to find out much later that this character is an attorney who happens to be gay and married to another woman, because that is how we exist out here in the real world.”

Grimes said diversity also needs to extend far beyond the screen in order for real change to take place within the industry.

“Back in September, Warner Media issued a policy statement that in part states our endeavor to engage minority and women-owned businesses in all of our processes,” he said. “We also went a step further and stated that once a year, we will publicly report our achievements and our progress in that.”

As the treasurer of the National Minority Supplier Development Council and a board member of the Women’s Business Enterprise National Council, Grimes said he always is looking for certified businesses to work with in the locations Warner Media’s productions are filmed — including New Jersey.

Read more from ROI-NJ on the forum: