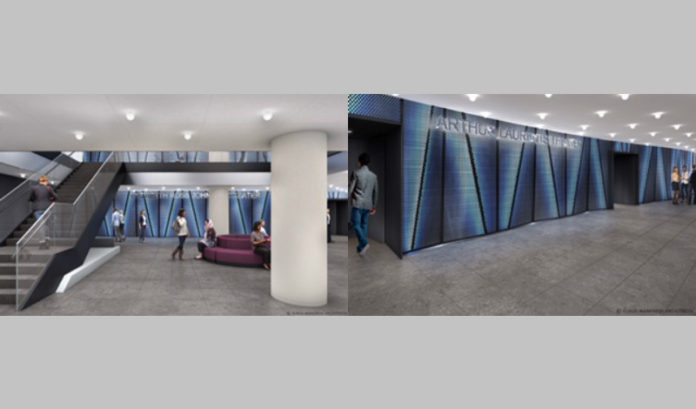 The largest gifts in George Street Playhouse history — totaling $7.75 million — will be recognized with the naming of the new Elizabeth Ross Johnson Theater and the Arthur Laurents Theater.

Moreover, the recently announced gifts will help further solidify the New Brunswick Performing Arts Center as a premier center for the performing arts in the state.

Chris Paladino, president of New Brunswick Development Corp. and the developer of the $172 million NBPAC, said the gifts represent another milestone moment for the arts in the city.

“This is an exciting moment for NBPAC and the city of New Brunswick,” he said. “NBPAC continues to deliver on its promise to transform New Brunswick’s Downtown Cultural Arts District.”

The 450,000-square-foot, 23-story redevelopment initiative — one of the biggest public-private partnership deals in state history — is currently under construction at the former site of George Street Playhouse and Crossroads Theatre Company.

The project includes $60 million of arts infrastructure, such as two state-of-the-art theaters that will allow four resident companies to come together in a place where there used to only be two, Paladino said.

“People with no understanding of the background say, ‘You tore down two theaters to build two theaters and you spent $60 million to do that?’” he said.

But NBPAC will continue to be home to George Street Playhouse, the first professional producing theater in New Brunswick, since 1974, and Crossroads Theatre Company, the more than 40-year-old recipient of the 1999 Tony Award for Outstanding Regional Theatre in the U.S. In addition, NBPAC will house the American Repertory Ballet and the Mason Gross School of the Arts at Rutgers University-New Brunswick.

Bringing them all together is key, Paladino said.

“Prior to, Mason Gross was not really part of the downtown professional arts scene in New Brunswick,” he said. “This will allow Rutgers students to work in a place alongside equity (talent) with a whole different level of enthusiasm and engagement. And the American Repertory Ballet was not able to perform their full season in one place.

“They can (all) now perform opera and ballet, whereas they could not before due to (limited) wing and stage space. We solved the facility issues.”

George Street Playhouse and Crossroads Theatre Company also used the stages to rehearse prior to the creation of NBPAC.

“But, now, we’ve built six rehearsal studios that all mimic the sizes of our stages and are therefore able to pick up nights in between runs of shows to do other things,” Paladino said.

The Elizabeth Ross Johnson Theater will seat 463 and will boast an 86-foot stage, an orchestra pit for up to 70 instrumentalists, a 74-foot fly tower for suspended stage scenery, a green room and a trap system below.

The Laurents/Hatcher Foundation gifted $2.75 million to George Street Playhouse in support of its continued development and production of new plays and musicals, with Arthur Laurents having premiered nine of his plays at the theater while writing the books for musicals such as “Gypsy” and “West Side Story” and the screenplays for “The Way We Were” and “The Turning Point.”

The Arthur Laurents Theater will seat 259 facing a 60-foot stage.

“This is money that goes toward the endowment of our resident companies,” Paladino said. “For example, if there is $10 million raised, we take 20 percent of that and put it in reserves, so, if ever we need to replace lighting or sound equipment, for example, we already will have it set aside.

“The rest of the money goes toward supporting our companies and their art.”

“We are grateful and honored by the generosity of Betty Wold Johnson, the Elizabeth Ross Johnson Charitable Trust and the Laurents/Hatcher Foundation,” Kelly Ryman, managing director of George Street Playhouse, said. “As we prepare to take residence in this new, state-of-the-art performing arts center, the confidence our benefactors have in the work we do takes on new meaning.”

New Brunswick Mayor Jim Cahill said it will be a game-changer.

“The New Brunswick Performing Arts Center represents the absolute best in the arts, public and private partnerships and state-of-the-art entertainment and culture,” he said.

“We look forward to raising the curtain this year to welcome the next chapter of our outstanding performing arts scene in these new and modern spaces, named in honor of two beloved champions of the arts and culture.”

“We are planning a collaborative VIP (performance) with our four resident companies,” he said.

NBPAC staff will be working within the facility by July 31, Paladino added, giving them a month to prepare for the upcoming season.

“DEVCO will provide a variety of professional services in the way of an executive director, finance and accounting and the like,” Paladino said. “Middlesex County, which is moving over all of its arts infrastructure into this building, will provide professional services and educational programming by way of their Arts Consortium. And we are hiring a director of operations and a production coordinator, to be announced shortly.”

They have their work cut out for them. In addition to planning for nonresident rental opportunities, Paladino said they also are speaking and working with various arts organizations across the country to implement live television performances, arts festivals and programming in music and literature.

“We also would like to use our lobby spaces for visual arts presentations, with artists being able to use them as galleries,” Paladino said.

In addition to the arts infrastructure, NBPAC will include 30,000 square feet of office space for Middlesex County, a 344-space parking garage and 207 residential units, complete with an outdoor roof deck and a fitness center.

“We’ve set 20 percent of these apartments aside as affordable units and we are working with the Actors Fund to try to encourage artists to take a look at them,” Paladino said. “We want to include artists such as choreographers, musicians, playwrights and actors in the community by having them actually live here.

“The Broadway community already is seeing that they’ve got a state-of-the-art facility just 30 miles from New York City, where actors can both live and work closer to home.”

Paladino said NBPAC is going to soon be an exciting hub of activity, not just for the four resident companies, but for many other innovative projects.

“So much of New Brunswick’s next chapter will revolve around the arts,” he said.

Mansue’s advice: Be authentic and true to yourself