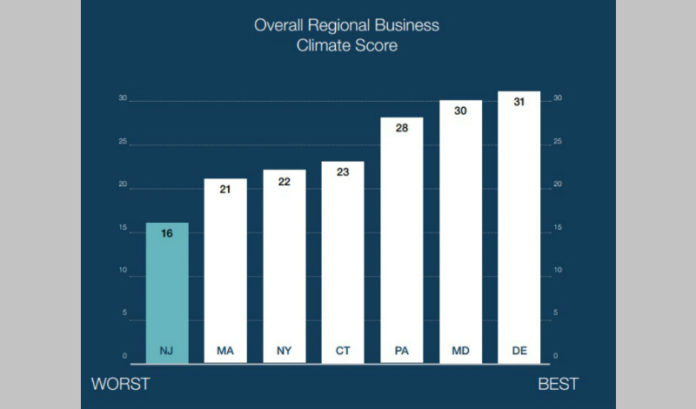 The New Jersey Business & Industry Association has released its 2019 Regional Business Climate report, ahead of its fiscal 2020 budget testimony before the state Legislature — scheduled for Wednesday — and the news is not particularly good for the Garden State.

The analysis, which compares New Jersey with neighboring states including Connecticut, Delaware, Maryland, Massachusetts, New York and Pennsylvania, found that the state finished last in terms of business climate, and that its underlying numbers declined even from 2018’s last-place finish.

“The proposed budget, which spends 3.2 percent more than the current fiscal year and 11.2 percent more than in FY 2018, looks to pay for additional spending by raising taxes on our already-overtaxed residents and businesses,” NJBIA CEO and President Michele Siekerka said in a prepared statement. “Our history of funding additional spending by increasing taxes is the formula fueling New Jersey’s high cost of living and affordability challenges. The result is a continued pattern of outmigration and job stagnation.

“The only way to turn this around is to put an emphasis on reforming the structural challenges we face, as they impact our economy due to their high cost to maintain.”

The analysis scored the seven states on a scale of 1 to 7, with 7 being the most competitive, in six categories. Delaware ranked first, with a total score of 31, nearly double New Jersey’s last-place total of 16 points.

In 2018, when NJBIA scored the states with 1 being the most competitive, New Jersey finished with 31 points. That would be equivalent to this year’s 17 points.

NJBIA noted that the increase in the corporate tax rate meant New Jersey finished last in four tax categories in 2019, rather than the three where it ranked last in 2018.

“We are going from least competitive overall to extreme outlier status, and this is certainly not a move in the right direction,” Siekerka said.