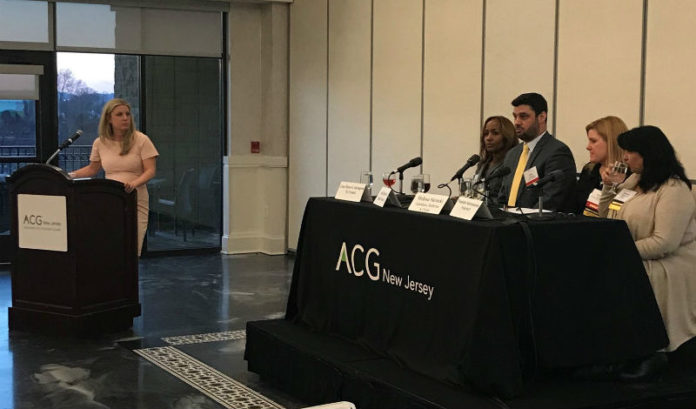 The Women of Leadership Committee with the Association for Corporate Growth New Jersey discussed how best to generate capital via women- and minority-owned business certifications Wednesday at the Galloping Hill Golf Course in Kenilworth.

Lisa-Marie Codrington, senior director with the Office of Business Development for New Jersey Transit, said the best place to start is online.

“You can now apply, submit your payment and even renew your certifications online,” she said.

“Under the New Jersey Unified Certification Program, the three certifying agencies are NJ Transit, the New Jersey Department of Transportation and the Port Authority of New York and New Jersey,” Codrington said. “Once you certify with one, you are automatically certified with the other two and can work on their contracts as well.”

The amount and variety of commodities and services that transportation companies procure is excessive, she said — so, she recommended that the women- and minority-owned businesses in the room do three things to secure these contracts.

First, make sure their contact information is up-to-date and easily accessible.

“We send early bid alerts for upcoming contracts,” Codrington said. “But, often times, the person whose telephone number or email address is listed is not the person tracking upcoming opportunities.

“If you’re the owner and you are too busy? Have someone else receive and look out for these emails.”

Then, she said, attend pre-bid conferences, which are open to the public.

“Small businesses are not usually in these rooms, but the prime bidders are,” Codrington said. “That is your opportunity to speak with the companies and agencies who are offering and bidding on these contracts.”

Finally, if you do land a subcontract with a prime bidder, be sure to partner with other SBEs and DBEs to help get the job done, she said.

“If you’re not going to reach back and use another SBE or DBE, why should a prime bidder work with you at all to meet their goals?” Codrington said.

Josh Donovan, a senior Small Business Administration business development officer and senior vice president with Bank of America, said lending agencies do not have to provide a certain amount of loans to women- or minority-owned businesses.

“However, when providing a loan, they might say, ‘For every $50,000, you must create one job,’” Donovan said. “When you are a woman- or minority-owned business, you can usually overwrite this requirement. If you typically needed to create 20 jobs for a loan, by virtue of your status, you may only need to create five jobs to qualify.”

Additional, SBA loans typically do not require a certification specifying that one is a woman- or minority-owned business, he said.

“But, while most established banks are not looking to provide projection-based loans, if you have a physical contract signed by the government and a certification, that could be powerful,” Donovan said.

Melissa Skrocki, a lawyer and shareholder at Giordano, Halleran & Ciesla, said she spends much of her time in contract negotiations, including assisting women- and minority-owned businesses with their state and federal Minority- and Women-owned Business Enterprise certifications and renewals, as well as with private certifications.

“It’s best to ask, what is the purpose of this certification? And do you meet all of the certification’s obligations?” she said.

For government contracts, Skrocki said, you will need either federal or state certification.

“But I worked with a client who owned a sanitation contracting company, which didn’t actually pick up garbage, but contracted with various sanitation companies throughout the country for large clients,” she said. “She would be in charge of maintaining all of their sanitation contracts.”

A private certification proved sufficient, more flexible and faster to obtain for her, Skrocki said.

“The biggest thing is that the business must not only be directly owned by a woman or a minority — they must also make sure they are maintaining daily operational control,” she said. “For example, though a client owned 60 percent of her company with a man who owned 40 percent, we had to appeal an application because the agency was not confident that she maintained daily operational control. During the appeals process, she went before the board to be grilled on the growth of and all the different facets of her business.”

Manisha Subramanian, owner of PrideStaff in Edison, a full-service staffing company, said becoming certified as both an SBE and an MWBE by the state has been beneficial to her business.

But it has not been without its challenges.

In addition, filling out 120-page requests for proposals can often be prohibitive as a small business owner.

“Outside of hiring someone to help me with that, how am I supposed to spend that time going after these bids?” Subramanian said.

Still, the opportunities open to her and her business now are much greater, she added.

“Sometimes, it just cracks the door open and it is my job to go and kick it in,” Subramanian said.