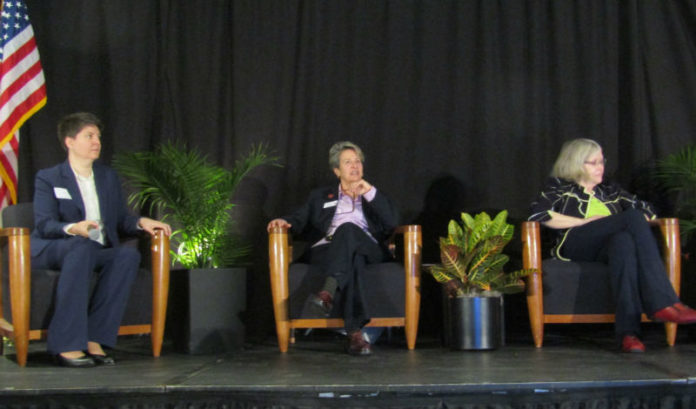 No matter what, technology will change the job everyone is currently in, Jane Oates said.

Oates, who is currently CEO of Los Angeles-based nonprofit WorkingNation and has served as both executive director of the New Jersey Commission on Higher Education under former Gov. John Corzine and as assistant secretary of the Employment and Training Administration in the U.S. Department of Labor under President Barack Obama, was speaking at the fifth annual Women Designing the Future Conference on Friday at New Jersey Institute of Technology in Newark.

And Oates said there is no exception. You can be a custodian or working in a restaurant, she said, because everyone’s job is being turned on its head by technology.

“Thirty-six million jobs, 25 percent of all U.S. jobs, will face high exposure of automation in the next three years,” she said. “That means that up to 75 percent of the tasks and competencies involved in that job will be eliminated.”

The jobs at high risk of total elimination, according to Oates, are not necessarily the entry- or low-level jobs that most would think, but the highly-routinized jobs where the worker does the same thing repeatedly.

One of these professions, Oates said, involves adding columns of numbers — an accountant. She said marketing is another at-risk sector.

Oates used past societal shifts in the country’s workforce to further emphasize the rate at which technology is taking industry sectors by storm.

“Our country has been through transformation before in the world of work,” she said. “We went from an agricultural society to a manufacturing society, and we did that over 140 years. But this technological change that’s coming is happening by the minute. You go home on Friday for the weekend to come back Monday needing to learn a new software package.”

That is the norm right now, she said.

From June 2016 to June 2018, the number of jobs on the career search site Indeed that included the words “AI” or “Machine Learning” increased 100 percent, Oates said.

The amount of data that has accumulated since the beginning of the technological transformation that Oates refers to is unprecedented. Oates said it speaks to the rate of growth in the technology sector.

“This statistic is real, and I’ve tested it. In 2018, 87 percent of all the data that exists was created in the last two years,” she said. “And we’ve been collecting data for decades, since before I was born. There’s been data for over 60 years.”

But this reality doesn’t have to have a negative connotation. Oates said technology has made certain sectors safer, particularly manufacturing, where the operation of heavy machinery has become much less dangerous, with fewer accidents in the workplace, because of it.

Oates also made a point to emphasize the lack of gender diversity and female representation in STEM-related fields.

The fifth annual Women Designing the Future conference, titled “Game Changers! Technological Innovations That Will Transform Our Lives,” attempted to explore how game-changing technological innovations will both disrupt and improve our lives over the next 10 years while focusing on the role of leading women.

Oates was speaking on the Robotics, E-Commerce and The Future of Work panel. Also on the panel were Rochelle Hendricks, former secretary of higher education under Gov. Chris Christie; Sally Nadley, assistant dean and director of the Douglass Project for Rutgers Women in STEM; and Aisha Glover, CEO and president of the Newark Alliance.