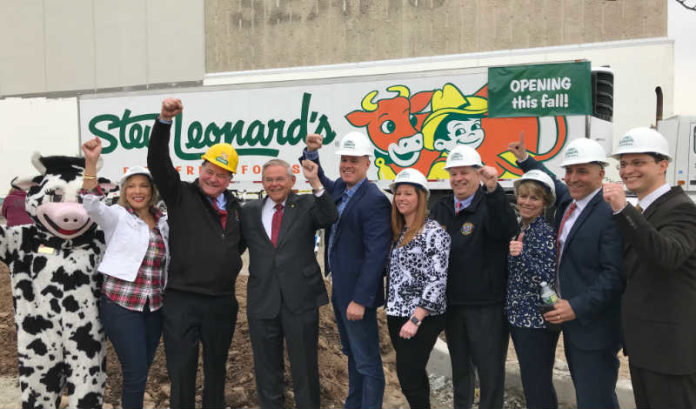 The ceremony featured two baby bovines — 1 month old — and a 1-year-old toddler Holstein calf, as the officials toasted with milk in champagne glasses in celebration.

According to Stew Leonard’s officials, the 80,000-square-foot store will create more than 350 new jobs in the region, as the new Paramus location replaces a famed 45-year-old Sears department store.

“We stand here today beside a shuttered Sears — a constant reminder of the economic struggles retailers have faced in recent years — knowing that a better future is on the horizon,” Menendez (D-N.J.) said. “Beyond employing hundreds of New Jerseyans, I’m hopeful that Stew Leonard’s will help spark the revitalization of retail we want to see here in Paramus.”

The ZIP code of Paramus, 07652, rings up more retail sales than any other ZIP code in the country. Paramus Mayor Richard LaBarbiera

The state we call home, the “Garden State,” is also home to over 10,000 farms, encompassing over 8,000 acres of farmland, and a thriving agricultural industry. New Jersey is among the Top 10 producing agricultural states in the union, and Stew Leonard’s will be buying produce from hundreds of regional farms to be available for local residents.

Stew Leonard’s has been dubbed “the Disneyland of dairy stores” by the New York Times, and currently has six popular locations in Connecticut and New York state. The Paramus Park Mall will also be the new home of Stew Leonard’s Wines & Spirits of Paramus, which will move from its current location at 396 Route 17 N. to the interior of the Paramus food store, offering shoppers convenient, one-stop-shopping for fresh food as well as more than 1,600 wines, 800 spirits and 500 beers.

LaBarbiera welcomed Stew Leonard by saying, “Paramus was a great choice for the new store, as data shows that the ZIP code of Paramus, 07652, rings up more retail sales than any other ZIP code in the country.”

The store is expected to be ready and open for business by late October 2019 and, when completed, the state-of-the-art store will bring farm fresh food shopping to New Jersey with dozens of chefs, butchers, fishmongers and more, preparing gourmet foods daily. Also, like its sister locations, the new Paramus space will feature an in-store “from-scratch” bakery, Stew Leonard’s signature one-way aisle, and interactive animatronic characters that will perform shows to entertain families while shopping.

Stew Leonard’s is a $400 million-a-year company currently welcoming over 11 million shoppers annually, and was designated the “World’s Largest Dairy Store” by the Guinness Book of World Records. And the family-owned and -operated Paramus store is expected to generate millions in sales tax revenue for the respective local, county, and state governments.

EisnerAmper’s Weinstein is 1 short in quest to visit every baseball...