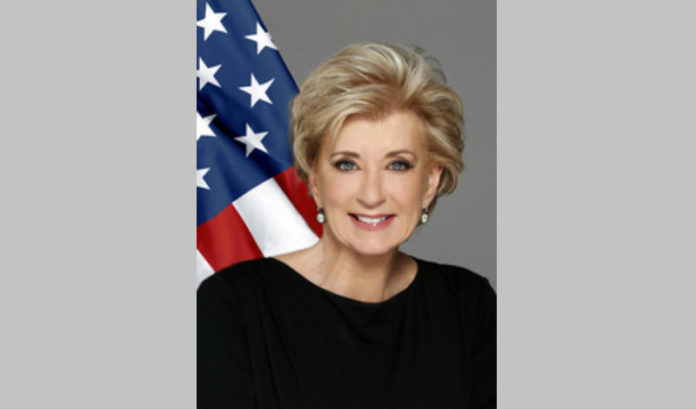 The head of the U.S. Small Business Administration, Linda E. McMahon, announced Monday in a statement she is resigning from her role as administrator, effective April 12.

McMahon, a former professional wrestling executive, founded Titan Sports Inc., which is now WWE, in 1980 with her husband Vince McMahon.

McMahon, who was tapped for the job in 2016 by President Donald Trump, said its been “the honor of a lifetime to serve”. Her plans to leave were first reported by Politico.

“Two years ago, President Trump entrusted me with the privilege of leading the SBA. The opportunity to lead the agency in supporting America’s small businesses has been immensely rewarding. I’ve also had the opportunity to witness firsthand the transformative impact the President’s growth policies are having on communities across this country: small businesses are reporting some of the highest levels of optimism on record; they are gaining access to new global markets; they are expanding access to affordable health care; and they are investing in their companies and their employees – raising wages, providing bonuses and benefits, and creating more jobs.

“I’m very proud of the work this agency has done to improve the way we connect small businesses to capital, counseling and government contracts. The focus that we have put on supporting women entrepreneurship, veteran businesses and rural development has been particularly rewarding for me. I am especially proud of the agency’s unprecedented disaster recovery efforts in 2017, in the aftermath of three of the costliest hurricanes on record. After Harvey, Irma and Maria hit, SBA’s dedicated professional staff worked around the clock to approve more than $7 billion in low-interest loans to help small businesses and displaced residents recover from the disasters and rebuild their homes and livelihoods. That experience and the life-changing impact this agency had on so many Americans is something I will never forget.

“While it has truly been the honor of a lifetime to serve our country in this Administration, it is time for me to step down and return to the private sector. I am resigning my position at SBA effective April 12. I wish to thank the President and I will continue to be a strong advocate for him and his policies.”

It’s time to roll back tariffs on steel, aluminum