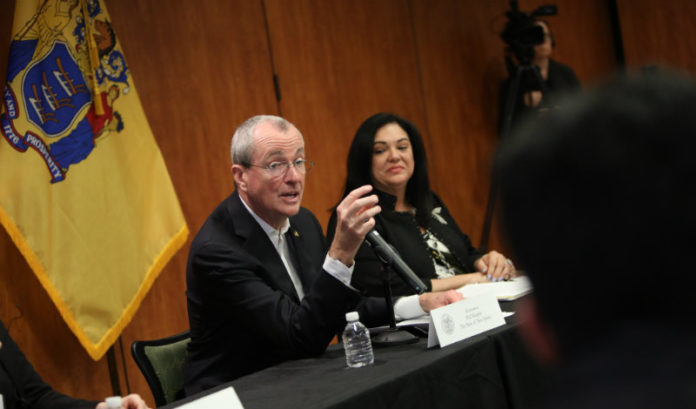 Gov. Phil Murphy ventured into a new arena Friday afternoon, addressing and making himself available to a gathering of Hispanic media in New Jersey.

At least a dozen Spanish-speaking outlets, several consul generals and Department of Banking and Insurance Commissioner Marlene Caride attended the hourlong event, which was hosted by the Statewide Hispanic Chamber of Commerce of New Jersey in Lyndhurst.

It was lauded as the first meeting of its kind, and it is something the governor said he would do again.

“I think we have to do this more often,” he told ROI-NJ after the event. “I was thinking, sitting there, that there are pockets — buckets — of different types of media. You’ve got African-American media, you’ve certainly got Latino media; I’d certainly like to do more of (these meetings).”

Murphy also said he identified an overarching theme in the concerns and questions the media were asking: Why hasn’t the state embraced a more bilingual or multilingual approach to everything from agency documents to advertising dollars the state spends on media?

“There’s a general consensus here that language, and finding more common ground lingually, would help us with a lot of challenges we may have in bringing the communities closer together. … I accept that,” he said during the event.

Many of the questions focused on the cost of business permits and licenses, as well as the way New Jersey handles transfers of professional certification from other countries.

Murphy told the crowd of about three dozen that these concerns are something he cannot address by executive order; they require legislative action. Murphy also acknowledged that the prohibitive cost of doing business affects small businesses all over the state.

SHCCNJ President Carlos Medina said this is one of the reasons the meeting was so important — so those who are in charge of providing the community with information on the government are better informed and educated on the processes.

“This was a first step in having a more robust dialogue going forward, and also getting the press used to meeting with him, getting protocol down and getting questions to him succinctly,” Medina said.

“We are not asking for spare change,” he said. “We’re here in order for them to look at us as business partners.”

For its part, the chamber has offered the various Hispanic outlets aid in preparing to bid for and get the attention of state agencies and other sources for advertising revenue. Most of them are small operations.

“I think our commitment is to help them get ready,” he said. “How long it takes depends on them.”

Medina said it was a good first meeting for both sides and proves the governor’s understanding of the importance of the Latino community to the state’s small business sector.

“He’s being very smart in his decision to pay attention to us,” Medina said.

Murphy, during the event, told the crowd that the audience it reaches is a target for the state.

“This community is center stage in our aspirations for our New Jersey of tomorrow,” he said.

Affordability Summit: Soaries details need to resolve many issues at once