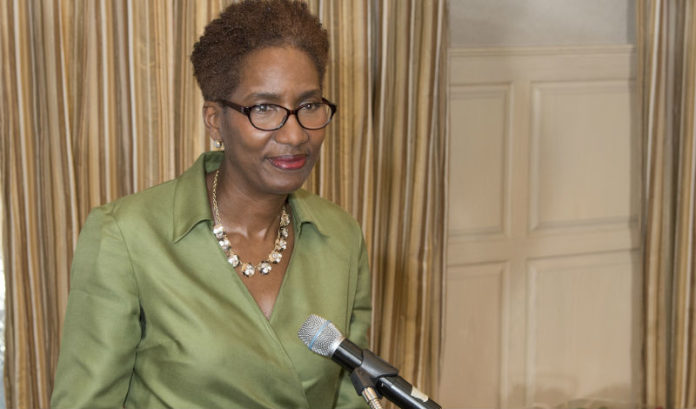 Holly Kaplansky said the New Jersey Association of Women Business Owners is not only an organization in which women network and conduct business with one another.

“We also are an organization with a significant public policy position, dealing directly with and representing all of the women business owners in New Jersey to state legislators,” Kaplansky, president of NJAWBO, said.

That is why the longest-standing women business owners’ organization in New Jersey invited Hester Agudosi, chief diversity officer with the New Jersey Office of Diversity and Inclusion, to speak at NJAWBO’s recent annual spring luncheon about upcoming opportunities with the state.

“There is now a concerted effort by the administration to make concrete structural changes to ensure we have a greater and more robust engagement with women- and minority-owned businesses,” Agudosi said.

After being appointed by Gov. Phil Murphy last year as New Jersey’s first chief diversity officer, Agudosi said one of the first things she did was assess all the state departments and agencies regarding their work with women- and minority-owned businesses.

“What I found is that there have not been significant gains since a statewide disparity study was conducted over a decade ago,” she said. “When it comes to state contracting, the number of women-owned businesses that are doing business with the state is still hovering somewhere around 3%.”

That began to change last week, Agudosi added, when New Jersey Transit held for the first time in 10 years an engagement at its headquarters in Newark to discuss multimillion-dollar contract opportunities for the next fiscal year.

“It was to do what we are planning to do with all of our state departments and agencies, which is to directly engage with women- and minority-owned businesses,” she said. “These types of engagements are going to be very helpful for you to know the state departments, what they spend on, how much they spend and when their requests for proposals come out so that you have an opportunity to complete and respond to them.”

NJ Transit is just the beginning, Agudosi said, before announcing that the administration will host for the first time a statewide Minority and Women Business Enterprise Summit on Sept. 20 at the New Jersey Institute of Technology in Newark.

“The value of being both a registered and certified Minority and Women Business Enterprise is to be able to be in a space where you can meet and speak with — as well as be considered by — representatives from all of the state departments, agencies, authorities, commissions, colleges and universities,” Agudosi said.

“We are very far behind other states in terms of (utilization) of women- and minority-owned businesses,” she said. “For example, New York has a 30 percent goal and they push very hard to meet it.”

As a member of the New Jersey Board of Public Utilities Supplier Diversity Development Council and chairwoman of the New Jersey Government Records Council, as well as president of Technoforce, a leadership training and consulting firm in Randolph, and co-founder of the Women’s Center for Entrepreneurship Corp. in Chatham, Tabakin said one place to start would be with utility companies.

“The regulated utilities have an interest in increasing their supplier diversity,” Tabakin said. “And one of the ways to get your foot in the door is to do business with a prime contractor, or a company with a direct contract with a utility.”

If a small business were to get a subcontract with a Tier 1 contractor, she said, they would then be considered a Tier 2 contractor.

“And the utilities do actually keep track of the dollar awards and the number of contracts going to women-, minority- and veteran-owned businesses,” Tabakin said.

Tabakin also suggested that NJAWBO members take a look at the business opportunities listed at NJBUPSupplierDiversity.com.

“You could also look at the board members to see if there is someone you know,” she said.

“What we’ve realized is that while it is pretty difficult to get a contract with a utility or any large organization for that matter, it is not impossible.”