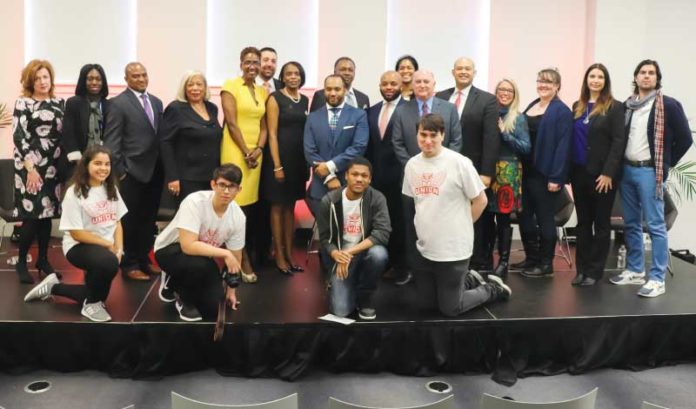 Cue the spotlights and alert the more than 14,000 residents currently working in the industry:

Film and television productions officially have returned to New Jersey, thanks to the reinstatement and significant bolstering of the Film Tax Credit Program, signed into law by Gov. Phil Murphy last summer.

At least, that’s the impression of top industry officials in the area.

“This new tax incentive has been fantastic and has really put New Jersey back on our map when we are looking where to film our productions,” Kirby Adams, senior vice president of physical production for Paramount Pictures, said.

State and local officials joined an array of film and television industry leaders at the Diversity in Film and Television Production Forum last month in Newark to discuss both upcoming opportunities and the importance of diversity when enlisting talent and crew from New Jersey.

“New Jersey has one of the most diverse workforces in the country, and it is critical that we ensure everyone has access to new opportunities, especially women and minorities who have been shut out in the past,” Hester Agudosi, chief diversity officer with the New Jersey Office of Diversity and Inclusion, said. “(This) forum showed how we can stimulate economic growth and support industries that create new jobs without losing our focus on building a fairer, more inclusive economy.”

The program, run by the New Jersey Economic Development Authority, aims to rejuvenate New Jersey’s film industry by providing a 30 percent tax credit against corporate business tax and gross income tax for qualified film production expenses and a 35 percent credit for goods and services purchased through vendors located in targeted areas of the state.

It also extends an additional 2 percent credit to those companies that develop a diversity and inclusion plan for the recruitment and hiring of at least 15 percent women and minority persons in their productions.

John Gibson, deputy chief of staff and senior director of diversity and inclusion initiatives for the Motion Picture Association of America, the global advocacy arm for the film and television industry, said that is just one of the reasons why he is proud to announce the MPAA’s partnership with the Newark International Film Festival this year.

“I’m able to amplify the gains that all of our studios have made by partnering with multicultural film festivals that, historically, our studios may not have partnered with,” Gibson said. “These festivals are like breeding grounds for the next level of talent, including many women and minorities.”

Ryan Coogler, for example, recently directed “Black Panther,” the third-highest-grossing film ever made in the United States, Gibson said. However, it was only his third film, following “Creed” in 2015 and the independent “Fruitvale Station” in 2013.

“He won a competition at the American Black Film Festival, which funded his dream to create ‘Fruitvale Station,’” Gibson said. “So, what we aim to do is connect our studios with these festivals if they don’t already have a relationship.”

Jeff Gomez, CEO of Starlight Runner Entertainment, said that, as a leading writer and producer of transmedia entertainment franchises and corporate narratives, he has worked to expand story universes such as “Pirates of the Caribbean,” “Spider-Man” and “Transformers” across multiple profitable platforms, including toys, video games and mobile applications.

Now, with studio offices in New York and California, Gomez, a Monmouth County resident, said he is excited to open a new location in Essex County.

“Starlight Runner is closing a deal with a digital company located just a few blocks away (from Newark) that would require us to go out and search for diverse talent, including LGBQT and neurodiverse talent, to engage in multiple multiplatform productions right here in New Jersey,” Gomez said.

“I particularly love to discover our freelance talent from the school system of the tri-state area, and, of course, being a little bit neurodiverse, I also like to work with young people on the spectrum who have similar peculiar talents as I.”

Jennifer Turner, a Newark resident and senior vice president of scripted programming for Sony Pictures Entertainment, said that, although her company does not currently have any productions shooting in New Jersey, it is certainly planning to.

“Our head of production has had numerous conversations with Steve Gorelick (executive director of the New Jersey Motion Picture and Television Commission), and we are 100 percent interested and excited about the prospect of shooting here,” she said.

Anamika Shrivastava, vice chair and owner of Kreative Productions, a Bollywood film production company, said she formed the company after relocating from India to New Jersey.

“I used to go back to work in the film industry there,” she said. “But, now, my production company is collaborating with many others based outside of the U.S., and we are inviting them here to film projects in New Jersey to create more local jobs.”

For example, Shrivastava said her next bilingual movie will film in Atlantic City.

Likewise, in addition to filming 13 episodes of “The Enemy Within” in and around New Jersey, NBCUniversal is working across its business units to increase diversity, Craig Robinson, executive vice president and chief diversity officer, said.

“I work with our business leaders to create a culture at NBC Universal where people feel welcomed to bring their whole selves to work every day and feel empowered to share what their lives are like outside of the office,” Robinson said.

Part of that is achieved through increasing diversity in company board rooms and on senior leadership teams, he added.

“The people at the table helping make decisions both in content and in company policy are therefore more representative of the real world,” Robinson said.

Clint W. Grimes, executive director of global sourcing and supplier diversity for Warner Media, said his company will be working in and around Newark in a big way.

“We have a production that I assume is taking place here in Newark called, ‘The Many Saints of Newark,’ which is a prequel movie to ‘The Sopranos,’” he said.

Productions in New Jersey always will have a significantly positive impact on the local economy, Grimes added.

“The local spend for ‘The Joker,’ for example, which was partially filmed in Newark and Jersey City, was about $2.2 million; local payroll was $3.7 million; and there were 11 cast members and 116 crew members from New Jersey,” Grimes said.

“For ‘The Many Saints of Newark,’ they are expecting at least five of its cast members to be New Jersey residents and a crew of between 200 and 300 people.

“Newark and New Jersey are becoming more prevalent and interesting and the tax credit has simply been the icing on the cake.”

Adams, who hires everyone but the director, writer, producers and cast, said he always is looking for a local diverse crew — and a whole lot of extras — to help the directors tell their stories.

“When our productions first come into town, we contact the local film office, which posts such opportunities on their (websites),” Adams said. “So, stay in contact with your local film office — and let them know you are ready to work.”