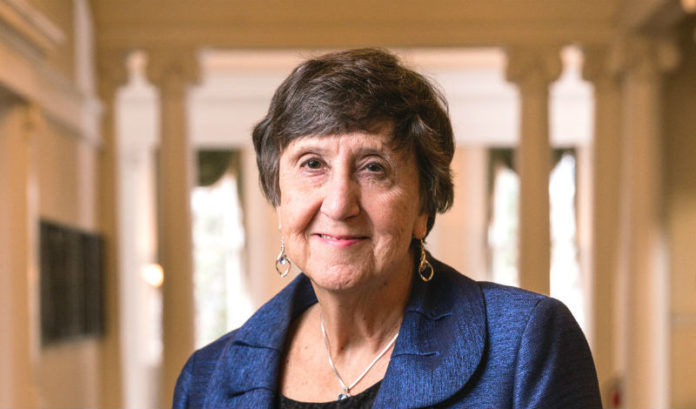 When David Haney announced his resignation as president of Centenary University in October, the Hackettstown school moved quickly to fill the leadership void … at least temporarily. Board member Rosalind Reichard, herself a former college president, was appointed to the interim post, effective Jan. 1.

Reichard, who retired from Emory & Henry College in Virginia in 2013, had been on the Centenary board of trustees for about five years when she accepted the new challenge. While she told ROI-NJ she is not interested in the full-time job, she expects to guide the school for a year or more, even as it searches for a new leader.

And, while she may be an “interim” president, that does not mean she is not an active one. She shared some of her insights and plans for the college with ROI-NJ:

ROI-NJ: How did a former college president from Virginia become involved with a school in Hackettstown?

Rosalind Reichard: I joined the board of trustees when asked by former President Barbara-Jayne Lewthwaite, who received my name from the General Board of Higher Education and Ministry of the United Methodist Church. I was recommended by this group as a recently retired college president who had been active and effective in working with colleges and universities affiliated with the church.

I agreed to serve because of my deep affection for small, private colleges and universities like Centenary that seriously work to develop students who will make a difference in the world through active service and civic engagement.

ROI: How did you wind up moving from the board to the interim presidency?

RR: I was approached to become interim president by the chair of the board of trustees. I chose to accept the position because the university needed someone with university administration experience, and I care deeply about the institution.

ROI: Are you under consideration for the permanent post?

RR: I am not a candidate for the permanent presidency, because I retired from a college presidency six years ago, and I prefer to continue my retirement, while on an interim basis occasionally helping other colleges and universities who have a compelling mission.

ROI: How do you handle the presidency on an interim basis, then?

RR: In general, the role of an interim president depends on the needs of the particular institution. At Centenary, my role is to continue its development of innovative programs and to strengthen its financial profile.

An interim president must be ready to make changes that position the institution for success, and for new leadership. Examples of this may include restructuring academic programs and university departments. A longer-term president may hesitate to make some decisions because of a concern for maintaining support from all constituents.

ROI: How long do you expect to be on the job? And can you share where the search stands?

RR: I will serve approximately one year, depending on the start date of the new president. An optimal time for an interim president is six months to two years.

On March 21, the board of trustees approved a contract with the Association of Governing Boards to move forward with the search. The search process will be coordinated by a search committee consisting of trustees, faculty, staff and a student. The plan is for the search committee to begin its work in April, with the expectation that the finalists will visit the campus in September and the board will elect the new president at its meeting in October. The start date of the new president will depend on the candidate selected.

ROI: What’s next for you?

In March, Gov. Phil Murphy and Secretary of Higher Education Zakiya Smith Ellis announced their vision for higher ed in New Jersey, including a “Student Bill of Rights” that outlined access and objectives for the state’s students.

Murphy’s plan also included a task force dedicated to supporting the state’s students and a goal of 65% postsecondary attainment by 2025.

Here’s what Centenary University interim President Rosalind Reichard had to say about the plan, and what she sees as Centenary’s role in it:

“Gov. Murphy’s Higher Education Bill of Rights is a helpful and important road map to increase the postsecondary educational achievement of New Jersey’s citizens. Centenary is especially pleased to see the plan support enhanced partnerships and pathways for educational attainment, an area of strength for us. …

“Centenary is a leader in New Jersey in partnering with educational, business and community institutions at all levels to provide multiple educational pathways that are affordable and accessible to students of diverse backgrounds, experiences and learning styles.”