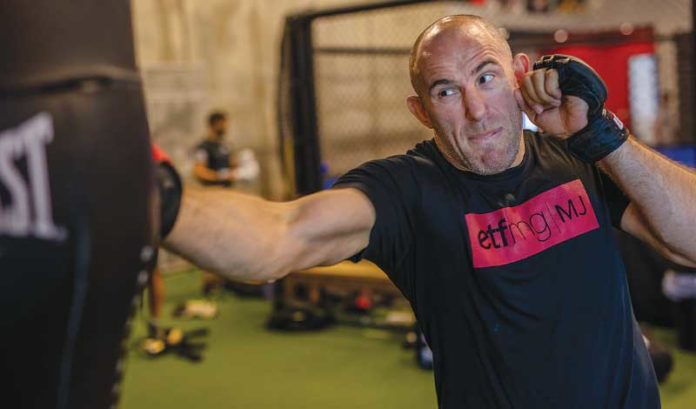 At first glance, a mixed martial arts star promoting an exchange-traded fund for cannabis may not seem like the most logical fit.

Especially one based in New Jersey, where proponents of legalizing recreational use of marijuana suffered another setback last week.

Masucci is the CEO of the Summit-based ETF Managers Group, which created MJ, the country’s first ETF dedicated to stocks in cannabis-related companies, in December 2017. He said the hiring last week of MMA heavyweight Alexey Oleynik to promote it is a perfect fit, for a number of reasons.

Starting with the fact that Masucci, a former Penn State wrestler who competed scholastically at the now-closed Bayley Ellard High School in Madison, loves the sport.

“I have been a big MMA fan for 20 years,” he said. “I’ve actually been a martial artist for 20 years. I like to watch these fighters really show the value of mixed martial arts — meaning it’s everything from punching and kicking and submissions.

“I love it, and I always hoped that there’d be an opportunity for me to somehow be involved. This is a great way to do it.”

But this is more than just a fanboy move. Masucci understands how the pairing makes business sense, too.

“Our (MJ) fund has several hundred thousand investors in it, and the average investment size is around $2,000 to $3,000,” he said. “That means it has brought a lot of millennial and new investors into the ETF space.

“A lot of those people are big MMA fans. So, I think it’s targeting our audience. It’s just a tremendous brand and a chance to be a part of it is a very valuable for us and it sets us apart from other ETF issuers.”

Its performance does that, too.

Since the MJ fund was launched, Masucci said the fund’s value is up $700 million in value this year, for a total AUM of $1.2 billion. For early investors, that has meant a 50 percent return. It’s one of many funds he oversees.

“We’re about a $4 billion ETF asset manager,” he said. “So, it’s all about differentiating ourselves in the crowd. We believe our products do that because 75 percent of them are first to market. A lot of them are the of the largest in the world, like HACK, which is $1.6 billion for cyber. IPAY is $450 million in mobile payments.

“But we’re most excited about our newest success, MJ, which is an alternative harvest ETF. It’s focused on medicinal marijuana.”

For Masucci, the timing couldn’t be any better.

Oleynik’s next fight is May 4 in Ottawa, Canada. Canada is one of the leaders in cannabis-related sales and products.

“About 40 percent of our holdings are in Canada,” Masucci said. “So, it’s a great venue for us to go up there.

“We’re going to spend some time with the movers and shakers in the industry. They’ll have a chance to meet Alexey. It’s just going to be a great association. And, let’s face it, Canada is leading the globe when it comes to regulating and understanding the benefits the cannabis plant and its derivatives have for medicinal uses.”

Canada’s passion for cannabis is not matched in New Jersey, which was unable to bring a vote that would legalize recreational use to the floor last week.

And, while Masucci said he would like to see cannabis legalized in the state, he said the fact that it isn’t does not impact his fund.

“It doesn’t affect our business at all,” he said. “This is a very new and evolving industry, in the case of cannabis.

“There are two parts to it. There’s the medicinal side and the recreational side. Many states, 13 of them, have said, ‘We’re going to allow for both,’ but even a greater number of states have said, ‘We see the value of the medicinal properties, treating things like PTSD, children’s epileptic seizures, Crohn’s Disease, weaning people off opioids.’

“This is a global play for us and it’s a global growth opportunity. Whether New Jersey gets there recreationally or not is really of little importance to the fund.”

Then again, any news is good news.

“Just it being in the news really helps it garner attention,” Masucci said. “People say, ‘I want to invest in this space, but I don’t want single-stock risk.’

“When you buy MJ, you buy into 34 companies that are all targeted within the growth in this space. And that’s why it’s up almost 50 percent this year and almost doubled its assets.”