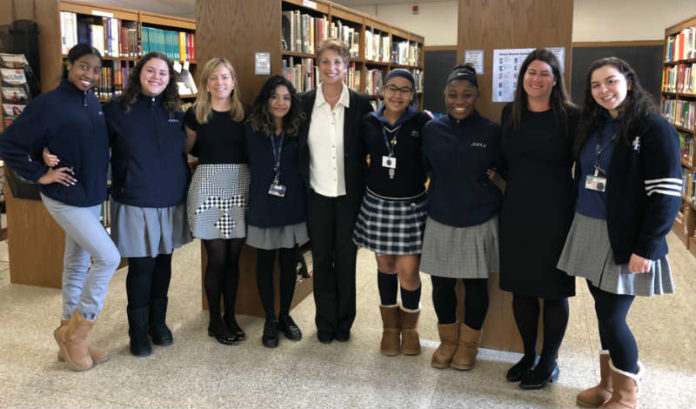 The Tri-County Scholarship Fund will host its 7th annual “Women of Achievement” luncheon in support of its Freedom Scholars Program on Thursday at the Canoe Brook Country Club in Summit.

“We are recognizing accomplishing women leaders in the community,” Prudence Pigott, executive director of the Tri-County Scholarship Fund in Parsippany, said. “Each woman will share her own story as well as words of encouragement for the nearly 30 students in attendance, to give them an idea of where their own lives could lead.”

Both a current and past Freedom Scholar will speak at the event as well, Pigott said.

The Tri-County Scholarship Fund enables academically gifted but financially challenged students living in Morris, Passaic or Sussex counties to attend and have a portion of their tuition paid at K-12 private and parochial schools.

“What was observed several decades ago was that, especially for students living in inner cities, schools were not able to deliver the quality education and safe environments that parents wanted for their children,” Pigott said.

In fact, as little as 50 percent graduation rates still exist for some high schools in these counties today, she added.

That is why Bishop Frank Rodimer of Paterson and Edward Hennessy, CEO of Allied-Signal Corp. (which later became Honeywell), made it possible in 1981 for parents to be able to afford alternative education options for their children.

“They created this nonprofit as a partnership between the fund, the schools and the families, to make sure that each family would also have a demonstrated commitment to their children’s future by contributing a portion of a further discounted tuition,” Pigott said. “Our parents, who are the heroes in this, will do almost anything to give their children an opportunity to be in a more nurturing educational environment, where people actually know their children’s names and can give them a chance to excel and reach their potential.”

The Tri-County Scholarship Fund currently partners with nearly 50 values-based schools, Pigott said, “or any school which has an honor code, community service requirement or character development as parts of its curriculum,” to award more than $1.3 million annually to nearly 450 students who maintain at least a B-grade average or higher.

“Our schools were reaching out to us to help keep brilliant students at their schools, with the schools willing to provide deeper discounted tuition and more in the way of tutoring and college preparation,” Pigott said.

To be considered for the Freedom Scholars Program, students must therefore submit an essay and be nominated by the school, in addition to their application.

“This way, we can make absolutely sure that a young person with real academic promise can be provided with and take full advantage of this opportunity,” Pigott said.

The Tri-County Scholarship Fund has awarded more than 30,000 scholarships totaling nearly $27 million since its inception, with 100 percent of its students attending either college or the military.

Examining the key differences between leadership and management on ‘State of...