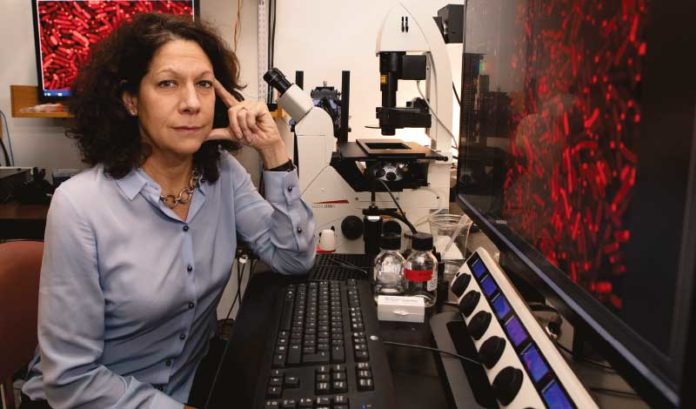 But maybe not as simple as you think.

Because what Bassler and her Princeton research cohort have discovered is that what drives the ability of bacteria to infect us is a surprising level of teamwork and communication.

“So, they wait and they grow — they count their numbers,” she said. “Then they all launch their virulence attack in synchrony so they can overcome host defenses.”

Yet bacteria are simple — single-celled organisms that predate all of the planet’s other organisms.

When Microsoft went looking for a starting point to do biology research faster, that’s where it started. It also started with Princeton, a powerhouse in both biology and computation research.

Microsoft came to the institution with a proposal to be its first academic partner to utilize a platform it calls Station B, an automation, machine learning and cloud computing technology that aims to not only expedite lab workflow, but help extract more information for analysis.

Bassler’s Princeton lab is now partnering with the tech company to more rapidly build artificial DNA constructs that it uses to better understand how bacteria know when they’re alone as opposed to in groups, how they behave differently and how they count their numbers. Among other things, Microsoft’s AI tools may help determine more about the mechanisms behind biofilms, slimy bacterial material that grows on surfaces such as medical stents.

Like most biomedical labs in academic settings, there’s a tenet of research and discovery involved in these studies that stays wise to how it may lead to real-world medicine one day.

And the potential for lifesaving therapies with this is reason for excitement. Because, if you could disrupt the communication relays involved in bacteria’s ability to infect people, that could open up a new realm of antibiotics, Bassler said. That’s something sorely needed as more resistances develop to the current slate of antibiotic options.

“Everyone wants products, medicine out of this,” Bassler said. “There’s a path that you have to take that we’re on — you make discoveries and, eventually, built on that, the applications get made. With this, hopefully we can make those discoveries faster. Then, ultimately, you may shorten the path to product.”

Besides having an eye on potential application of enhanced bacterial understanding in the biotech community, Bassler sees a capacity for vastly different scientists to find efficiency in the machine learning and other technological aspects featured in this collaboration.

Just the idea of group behavior being decoded on the primordial level of bacteria might itself have profound implications for scientific fields such as cancer research. Bassler would be hard-pressed to find a discipline this thinking doesn’t permeate.

“I’m a little biased, right? It’s my life’s work,” she said. “But I think my life’s work has gotten really far out of this lab. … And it’s not supposed to just stay in my lab, it’s supposed to go out everywhere. That’s the democratization of science.”

Ned Wingreen, another Princeton professor involved in the project, said physicists such as himself are eager to have easier access to the artificial DNA constructs biologists are capable of assembling today for experiments.

The role of Wingreen and other theoretical types in this project is to come up with models to improve outcomes after the geneticists figure out what reagents go into creating an organism and the computer scientists figure out how a robot can assist in that.

“One of the most exciting things in biology in the past decade is you can engineer organisms that are different from natural organisms and, therefore, learn how they work,” Wingreen said. “But it turns out that doing that is something of a dark art.”

It takes at least a decade of graduate school and postgraduate education to master the engineering of organisms as Bassler and her student lab associates have, Wingreen added.

“We’re hoping this tames that dark art and puts it in an automated context for someone who did not spend those particular 10 years of their life in a bacterial genetics lab,” he said. “Then people without that background can still ask exciting scientific questions and have the machine generate what’s needed to answer them.”

The end goal is to reduce the overhead required for academic researchers as well as companies doing all sorts of analysis.

As Bassler said, scientists are do-gooders. But her lab — one of the world’s premier bacteriology genetics labs — stands to gain as well. They view a more seamless process as having the potential for transformative progress in their own research projects, too.

When in the highly technical process of building DNA constructs for experiments, Bassler’s lab ends up taking only what works and moves on.

“But there could be patterns in the constructs and clones that don’t work as well,” she said. “The real goal then is to learn more about how and why things work. Maybe by a robot keeping track of all that information and data using machine learning algorithms, scientists going forward can do fewer experiments that don’t work and design experiments that do work even better.”

So, when that science-fiction reality sets in, when robots are communicating in labs like Princeton’s and completing certain tasks that right now only skilled scientists can perform, Bassler and her team won’t be taking days off. Instead, she plans on moving on to even more exciting work.

“It just unleashes the creativity of the scientists and really has the potential to introduce a fundamentally new way of doing science,” she said. “It can move science forward by a leap. That’s not lost on neither Microsoft nor us, even if we’re still at the beginning of this.”