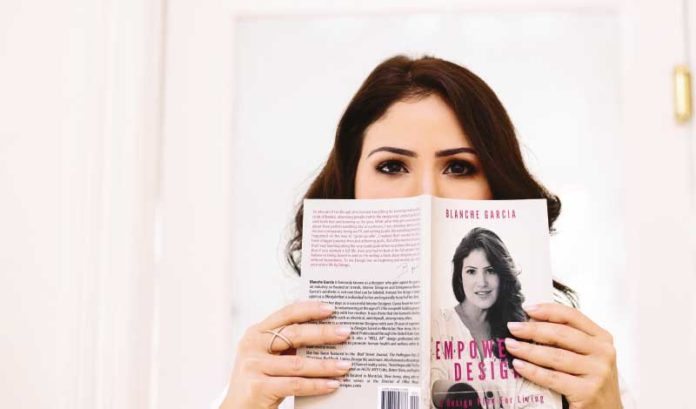 Blanche Garcia, a Montclair-based interior designer for more than two decades, said she is most recognized for her principal designs over five seasons of Travel Channel’s “Hotel Impossible.”

But the life she was leading when she left the show in 2015 was not sustainable, she added.

“I was home maybe five days out of each month and working 17-hour days,” Garcia, owner and principal of B. garcia Designs, said.

However, in the more than three years since her last taping, Garcia said business has grown by nearly 30 percent annually — with the last year being her best yet.

“Mindfulness has played a huge part in my business and what I am now infusing into it,” she said. “The worlds that I create aesthetically very much connect with how I live my life and my spiritual journey.

“And I want to talk about that.”

Attributing her success over the past couple of years to visualization and meditation practices she developed following her work on television, Garcia said she is now looking to morph her business into a more holistic lifestyle- and wellness-oriented brand across multiple platforms.

The challenge, Garcia said, will be staying on-brand.

“My business is me,” Garcia said. “There are many designers and speakers out there, so authenticity is key.”

Upon her full-time return to the brick-and-mortar space she had created for her interior design and renovation firm in Montclair, Garcia said she asked herself: “Now what?”

“I don’t ever want to stop following my passions,” she said. “And when you pigeonhole yourself into a box of just one type of creativity, it can become very boring and unfulfilling.”

Garcia said she sought guidance and inspiration from spiritual teachers such as Deepak Chopra, Eckhart Tolle and Marianne Williamson, and attended empowerment retreats at the Omega Institute for Holistic Studies in Rhineback, New York, and the Kripalu Center for Yoga and Health in Stockbridge, Massachusetts.

It was there, she said, that she learned how she could better blend her life and work.

“When you think of interior design, you think it’s just the way it looks,” Garcia said. “But it’s actually what you are doing and fueling and surrounding yourself with every day to reach your goals.”

To start, Garcia became a WELL accredited professional to consider not only the environment through her certification with Leadership in Energy and Environment Design, but also now the health, wellness and happiness of the inhabitants of a space.

Then, she wrote a book entitled “Empowered Design.”

But, since she already had been a television personality, Garcia said it was an uphill battle to pitch herself in the way that she wanted.

“When I wrote a book, it was expected to be a tabletop book based on all of my designs,” Garcia said.

“Instead, I wanted to ask of my readers: ‘What kind of design can help you to lead your best life? What goals do you want to achieve and how are you meditating on them? And are the people and spaces surrounding you helping to lead you to a better life?’”

Garcia said she also became more selective with residential projects in order to focus on more multimillion-dollar commercial projects and hotels, including TRYP by Wyndham in Newark, ICONA Diamond Beach in Wildwood Crest and The Elita Hotel in Fort Lauderdale, Florida.

“Hotels are now designing bigger lobbies versus bigger hotel rooms to emphasize socialization, while also outfitting rooms with things such as exercise equipment, Vitamin C showers, circadian lighting systems and meditation apps,” Garcia said. “And if that is the future of design, I would like to be a part of it.”

“When I don’t feel like I am challenging myself, I ask what would make me happier or what portion of what I am already doing will make me the happiest,” Garcia said. “Then I ask, ‘How can I do more of that?’

“I put in incredibly hard work over so many years, but not once do I ever think I have made it. I’m only as good as the project I have just finished or am currently working on.”

Garcia said she has enjoyed the ebb leading up to the next flow.

“Some months ago, I began evaluating and re-evaluating some of the practices that no longer serve me and moving forward on the ones that do,” she said.

That gave her the space and time to focus on her marriage to Shaun Killman, a carpenter featured on HGTV’s “All American Handyman,” in June and the home they purchased together in November.

But, ever since she and Killman have been capturing their renovation process on YouTube, Garcia said she is ready to jump back in the game in a more focused and energetic way, with more public speaking events planned for this summer.

“I create on so many different levels and mediums that I need to constantly check in with myself to ensure continuity and reception of the messages I want to put out,” Garcia said. “I want to make sure that I am authentically connecting with each and every part of what I am doing, whether I am designing a home or building, writing a book, or speaking.”

Garcia said she even would consider television again if it afforded her the right sort of balance.

“Even though it always has been my philosophy to put a plan together, I have learned not to say, ‘OK, this is what this needs to look like,’” Garcia said. “You have to leave room for you to change your mind and follow the cues.

“But there is nothing that needs to get done right now that can’t wait for me to take care of myself.”

Blanche Garcia said she employs just three at her interior design and renovation firm in Montclair, running up to 12 projects at a time in order to complete nearly 30 each year.

But Garcia said she is planning to expand both her team and her business in a big way by opening a satellite office in California within the next couple of years.

“With my husband and I talking about starting a family and where we are going to live, wouldn’t it be interesting to be able to take on more projects on both coasts?” Garcia said.

Lessons in negotiating within the female economy