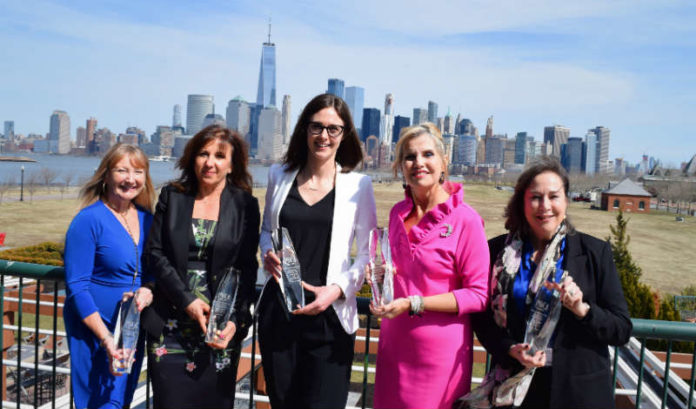 That is why the networking between and honoring of New Jersey women in the field at the 8th annual 2019 Women of Achievement Luncheon, held recently at the Liberty House in Jersey City by the New Jersey chapter of Professional Women in Construction, is so important.

“We provide huge opportunity for the unique needs of this group,” Chowansky, chapter president of PWCNJ and president of HC Constructors Inc. in Lebanon, said.

Professional Women in Construction is a national nonprofit organization founded in 1980 to support, advance and connect women while promoting diversity within the architecture, engineering, construction and related fields.

The New Jersey chapter was formed in 2007 and doubled in membership last year.

“It is a really exciting time to be part of a growing organization,” Chelsea LeMar, national executive director for PWC, said.

“We are building a community of women and men who support women to develop more opportunities like this,” LeMar said.

PWCNJ also honored five Women of Achievement at this year’s event, allowing each the opportunity to tell their stories.

Áine O’ Dwyer, CEO of Enovate Engineering in Cranford, said she grew up on her family’s dairy farm in Ireland.

“It is my family back home and those Irish country fields that taught me about the hard work and perseverance that was necessary for my career,” she said.

O’ Dwyer attended the only technical high school in her village, which exposed her to opportunities in STEM and competitive sports — both of which brought her to the U.S., where she played Division I basketball and soccer and earned both her bachelor’s and master’s degrees in civil and environmental engineering from New Jersey Institute of Technology.

“I don’t miss the 5 a.m. practices, but competitive sports did actually prepare me for work in the construction field,” O’ Dwyer said.

O’ Dwyer said she worked for more than a decade on various engineering projects before becoming CEO of Conti Professional Services and later taking ownership of Enovate Engineering in December 2017.

Bridget Davis, owner and president of GWS Environmental Contractors in South Brunswick Township, said her family had tremendous influence on her, too — in a very different way.

Davis worked as a paralegal for more than a decade before her father approached her about taking over the general construction company he established in 1977.

“I learned the basics here and there working with my parents, but never had any intention of making it my career,” she said.

However, as an only child, Davis said she could not imagine a world without the company she had grown up with. So, she began working with her mother in the office and on job sites with her father in 1994.

Then, when her husband, Eric, joined the family business in 1999, Davis said they worked together to expand the company.

“I was amazed by those women at job sites who would jump in and do a great job without complaint, unlike some of the men, who tended to do more whining,” she said.

Therefore, in 2016, Davis said she purchased the assets of a soil boring and drilling company to also become owner and president of BEnvironmental Investigations, which works hand-in-hand with GWS.

Karen Pyonin, CEO of Benco Inc. in Fairfield, said she, too, would learn as she led, after purchasing a small business specializing in the distribution of toilet partitions and lockers with her husband, Paul, nearly 32 years ago.

As a full-time mother of two, Pyonin said she pitched in wherever and whenever she could, with it never feeling like enough.

However, when she decided to become a nursery school teacher, the business felt her absence. So, Pyonin said she agreed to return.

“My first day back in the office, one of our employees joked about how long I would stay this time,” she said. “So, we made a bet. If I lasted more than six months, he and my husband would replace the old toilet partitions in our bathrooms.”

The new partitions ultimately were installed, and, more importantly, Pyonin said she learned how to be a leader — even taking it upon herself to take college courses in contract litigation, switch over systems to better integrate job costing with payroll and receivables and register the business as a certified Women Business Enterprise.

“Think about what you do well, what your strengths are and focus on those to help you advance in your career,” she said.

Rose Suriano, business litigation partner at Brach Eichler in Roseland, said after fighting her hardworking Italian immigrant parents to go to college, she knew where her strengths lay.

“When my father came here, he started a structural steel fabricating business,” Suriano said. “And, while my friends were going to summer camp, my siblings and I would be figuring out what to do all day at my father’s shop.”

In addition to treating the shop like a jungle gym, Suriano said, she learned how to best help her father in his business.

“My father was constantly fighting with everyone, whether it was for nonpayment or because the employees or suppliers didn’t show up,” she said. “And, I thought, I can argue and get paid for it? Law school was definitely for me.”

Not only did Suriano help her father resolve difficult pieces of litigation, she said, but her experience in the construction industry paved the way for her more than 30-year career in law, focusing on contract disputes, real estate transactions and construction litigation.

Anne Marie Almasi, president and chief financial officer of Almasi Cos. in Woodbridge, said she did not dream of working in the construction industry when she was a girl.

“But the common theme of my life has been to embrace change,” she said.

An avid dancer, Almasi said she met her now-husband, Bill, at a dance club while attending Middlesex County College. Then, she got pregnant.

“When I was nine months pregnant, my father-in-law asked if I wanted to come to work at Almasi on Monday,” she said. “It was a typical construction office inside a cold warehouse that came with lots of grease and grime, but, somehow, that didn’t matter.”

Almasi began working for John Almasi Trucking Co. at the age of 20, helping the company grow from a material hauling company into a full-service underground utility contractor.

Then, in 2002, she created her own woman-owned construction sitework company.

“The only jobs I didn’t get were the ones I didn’t feel confident enough in myself to ask for,” Almasi said. “Don’t let that first ‘no’ stop you. Ask how you can turn that ‘no’ into a ‘yes.’”