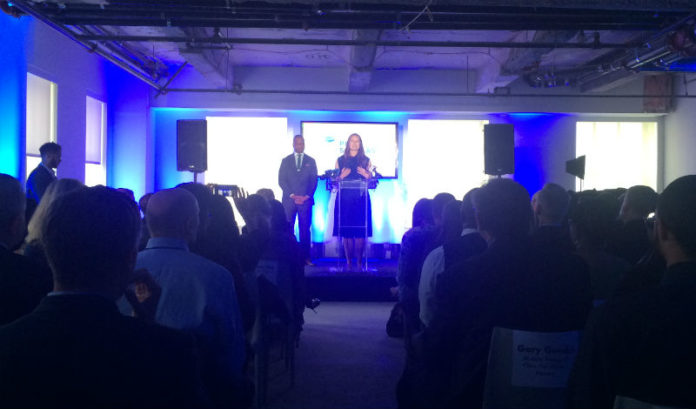 Newark has taken another big step toward transforming into the tech hub many city officials have promised it will become.

“Today, we contribute to the beauty of this building and we begin, through tech training and partnership, to meet the requirements of Newark and its outstanding future,” said Per Scholas Managing Director for Newark and New York Kelly Richardson.

Richardson was speaking Tuesday at the grand opening of Per Scholas’ Newark tech training campus in the former New Jersey Bell Building.

“Newark has a special air about it, there’s something that just can’t quite be described,” said Tony Gaston, Newark site director for the national tech training nonprofit. “Some might call it serendipity and some others might call it a bit of magic.”

Gov. Phil Murphy spoke about the importance of producing a diverse talent pool, particularly in tech and in the city of Newark.

“We are anticipating the intersection of the future of work and the future of Newark,” Prudential Financial Vice Chairman Robert Falzon said. “By helping to create a technology ecosystem and hub for emerging entrepreneurs and providing funding for local venture capitalists.”

Falzon said Prudential is invested in the Firebolt Wi-Fi network in Newark — which could become the world’s fastest free public Wi-Fi network.

The opening of the campus was supported by business and community partners Prudential Financial, Guardian Life Insurance, Public Service Enterprise Group and Barclays.

The first class of 19 students, most of whom are Newark residents, began in March, while the campus will look to place 200 individuals into technology careers over the next three years through tech training and professional development.

The new campus features three state-of-the-art technical classrooms and will enroll about 100 students per year, tuition-free. Per Scholas attempts to provide opportunities for diverse and low-income communities to succeed in a career in tech.

Murphy, prior to the grand opening, spoke about the importance of breaking down employment barriers.

“For too long, New Jersey’s best and brightest have not been able to reach their full potential because of systematic roadblocks,” he said. “My administration is fully committed to making sure that every New Jersey student has the opportunities they need to get ahead by partnering with organizations like Per Scholas to help close the achievement gap.”