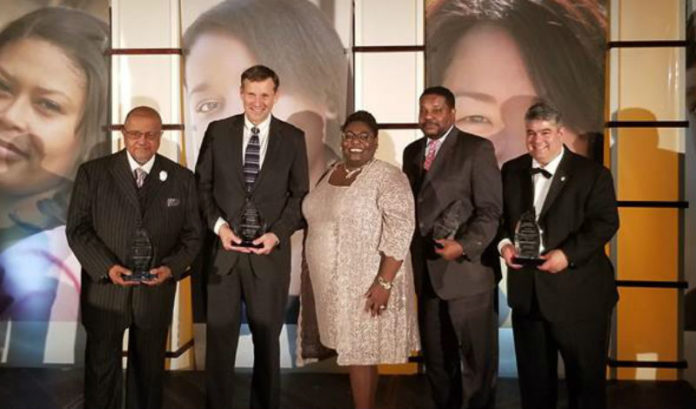 Statewide Hispanic Chamber of Commerce of New Jersey Chairman Luis De La Hoz was honored Tuesday for his efforts to support small businesses in the state and uplift Hispanic businesses.

The Bridge Builder award is an annual award from the Piscataway-based American Conference on Diversity.

In supporting comments of De La Hoz’s achievements, chamber President Carlos Medina said De La Hoz is the most loyal and giving board member he has ever met, someone who does for others with no expectation of return for himself.

After receiving his award, De La Hoz told the crowd he was lucky to work for a bank that supports the community and have people championing his efforts.

“I work for a community bank that really believes in our community,” he said.

His work at the chamber also has impact.

“We are 120,000 Latino business owners in the state of New Jersey, and we contribute over $20 billion to the New Jersey economy, even though we are only 20% of the population, but we are almost 50% of Main Street businesses in New Jersey,” De La Hoz said. “Latinas start businesses six times faster than any other group.”

De La Hoz, who previously worked with a microlending firm before joining BCB, focuses his efforts on helping startup and small businesses become loan-ready by building up their credit and providing microloans.

He thanked those entrepreneurs for inspiring him.

“I want to thank those entrepreneurs who every single day teach us lessons and inspire us,” he said.

Bayoh: ‘There is a significant demand for healthier food options in...