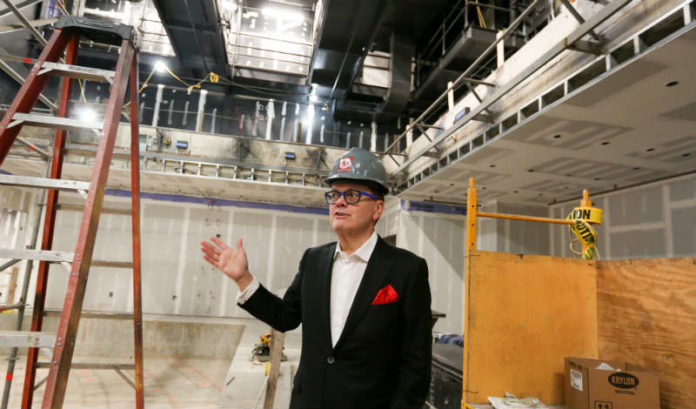 “I had a dream,” David Saint sang out for the first time on the stage of the Elizabeth Ross Johnson Theater. “And it’s finally coming true!”

Saint, artistic director of George Street Playhouse in New Brunswick, said everything’s coming up roses for both the theater company and New Jersey itself, with the creation of the New Brunswick Performing Arts Center providing a new destination in which to host and produce exciting artistic work.

“It’s finally happening because of a great public-private partnership between the city of New Brunswick, Mayor (James) Cahill, the county, the Middlesex County Freeholders, the state, Chris Paladino and New Brunswick Development Corp., and many others,” Saint said Tuesday during the first-ever backstage tour of the $172 million, 450,000-square-foot, 23-story NBPAC, currently under construction at the former site of George Street Playhouse and Crossroads Theatre Company.

“I can’t tell you how thrilling it is for me to stand here on this stage today, because it’s been a long time coming,” Saint said.

Originally located in an abandoned supermarket, George Street Playhouse was the first professional producing theater in New Brunswick. In 1984, the Playhouse moved to a renovated YMCA, and in 2017 took temporary residence in the former Agricultural Museum at Rutgers University.

“This is the first time in 45 years that we are actually going to be performing in a center that was designed from the beginning to be a theater, and it makes a huge difference,” Saint said.

Saint said he has been consulting with the architects and the developer, DEVCO, for nearly four years on the redevelopment initiative.

“So many buildings are built for theaters and they don’t consult the people who make the art,” he said. “If you don’t have that input, you don’t know what’s important and what’s not.”

The Elizabeth Ross Johnson Theater, for example, will seat 463 and will boast an 86-foot stage, an orchestra pit for up to 70 instrumentalists, a 74-foot fly tower for suspended stage scenery, a green room and a trap system below.

The Arthur Laurents Theater will seat 259 facing a 60-foot stage.

“The biggest producers in New York have all said to me, ‘What you’ve done so well is you have kept the space intimate, so that we can engage an audience’s response to a new piece, combined with the technical facilities to support a big Broadway musical,’” Saint said. “With this facility, you can actually try out a show and bring it right into New York without making any changes in the physical design.”

The project includes $60 million of arts infrastructure, including the two state-of-the-art theaters and three stage-sized rehearsal rooms, that will allow four resident companies — George Street Playhouse, Crossroads Theatre Company, the American Repertory Ballet and the Mason Gross School of the Arts at Rutgers University-New Brunswick — to come together in a place where there used to only be two, Chris Paladino, president of DEVCO, said.

“The goal is to have all the theaters active every night of the year — but a theater is only as good as the work you present in it,” Saint said. “So, I brought (DEVCO’s renderings) to New York, to all the producers, writers, directors and designers I know, and their response was phenomenal.”

Including Jeffrey Seller, he said, producer of “Hamilton” and “West Side Story” on Broadway.

George Street Playhouse’s inaugural season will showcase all-new work, including two pre-Broadway musicals on the larger stage: “Last Days of Summer,” based on the novel by Steve Kluger, with music by Grammy-winner Jason Howland (Broadway’s “Little Women”) and directed by Tony-nominee Jeff Calhoun (Broadway’s “Newsies”); and “A Walk on the Moon,” based on the critically-acclaimed film and written by screenwriter Pamela Gray, which will be directed by Tony-nominee Sheryl Kaller (Broadway’s “Next Fall”), with music by Paul Scott Goodman. George Street Playhouse also will present “My Life on a Diet,” starring Academy Award-nominee and Emmy-winner Renee Taylor; the world premiere of “Midwives,” written by Chris Bohjalian, author of 22 novels on the New York Times Bestseller List; and the world premiere of “Conscience,” a play about Sen. Margaret Chase Smith written by Joe DiPietro and directed by Saint.

“I tell my staff all the time, you wait and see what’s going to happen because I knew the minute we had this kind of facility here in New Brunswick, so close to New York, producers, writers, directors, they all are going to want to be premiering their (work) here,” Saint said. “We have built our national reputation upon developing and premiering new works, and we are thrilled to continue that commitment in our new home.”

In addition to the arts infrastructure, NBPAC will include 30,000 square feet of office space for Middlesex County, a 344-space parking garage and 207 residential units, complete with an outdoor roof deck and a fitness center.

Merissa A. Buczny, vice president of DEVCO, said it currently is in the process of identifying a donor for the naming rights of the building itself.

George Street Playhouse, for example, received the donations for the naming rights of both theaters, Saint said.

Construction, Buczny said, is expected to be completed by the end of July, with opening night scheduled for Sept. 4.

“Since we also manage The Heldrich Hotel, we’re excited about the partnerships we are able to enter into with the theater companies to partner on events at both (locations),” Buczny said. “Plus, all the restaurants and retailers are very excited about having an influx of people downtown again.

“They were a little concerned when they saw us start tearing the buildings down, but now that NBPAC is here and they see what’s on the horizon, everyone is excited.”

After all, Buczny added, it was the arts that brought in more than 200,000 visitors to the city annually prior to the creation of NBPAC.

“We expect that number to multiply by leaps and bounds with this new facility and the fact that we can now offer so many more shows per year,” she said.

Arriving on the advent of his 23rd season at George Street Playhouse, Saint said the completion of NBPAC represents both a dream fulfilled and a momentous point in both the theater’s and state’s history.

“The arts are the biggest engine in driving the economy of any city because people can come here to work and live, but the arts are what nurtures the soul and energy of a city,” Saint said.