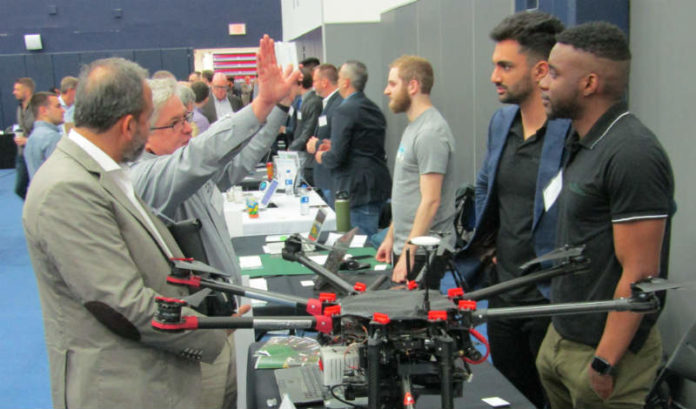 The crowd was a testament to the revitalization of the state’s innovation economy, said Beth Simone Noveck.

“If what’s going on in these halls isn’t amazing, I don’t know what is,” she said.

“Invest in the people, invest in the communities, harness the power of innovation to create more jobs and work to make government better to improve New Jersey’s business climate,” she said.

The people she refers to is all New Jersey residents that, she said, can help to prepare for, work for and create a more sustainable future. And she said investing in the communities allows for the creation of world-class towns, cities and infrastructure.

Noveck said it’s the investors and entrepreneurs like the ones she was speaking to at the conference that help to achieve those goals, the ones that have an important role to play.

“We recognize that capital and venture capital is essential to the success of any business,” she said.

Noveck said she and the Murphy administration are working to restructure their financing and incentive programs to achieve the outcomes they were intended to in the first place.

“Among those initiatives includes a proposal to create the first ever $500 million New Jersey Innovation Evergreen Fund that will connect New Jersey startups with the funding that they need to grow,” she said.

The fund will foster a vibrant and innovative ecosystem, she said.

Noveck also discussed the proposal, as a part of this year’s budget, to restructure the angel investor tax credit program so, she said, it will further encourage use by small, early stage investors.

She continued to highlight other initiatives, such as NJ Ignite and the HUB project in New Brunswick, but also referred to connections between the state’s higher education research institutes and the private sector.

“The state’s actively working to develop stronger connections between our research institutions and the private sector to enable more faculties and students to commercialize their ideas and inventions and to work with those companies that are trying to do so,” Noveck said.

Noveck said that, in addition to the individual school programs, the state’s creation of its first research asset database, Research with NJ, will help companies recruit the talent they need — a problem that’s been monumental for the tech and manufacturing industries.

She said companies require talent to grow, so investing in modernizing workforce development programs to reflect the demands of a skills-based, high-tech economy has become a priority.

“We’re working to ensure government is supporting your work and not standing in the way of it,” Noveck said.

NJIT President Joel Bloom also spoke at the conference and emphasized the importance of venture capital, and how New Jersey is falling behind as a state in this regard.

The Tech Council’s 22nd Venture Conference aimed to showcase the region’s most promising companies and attempts to offer insights from many of the nation’s top investors.