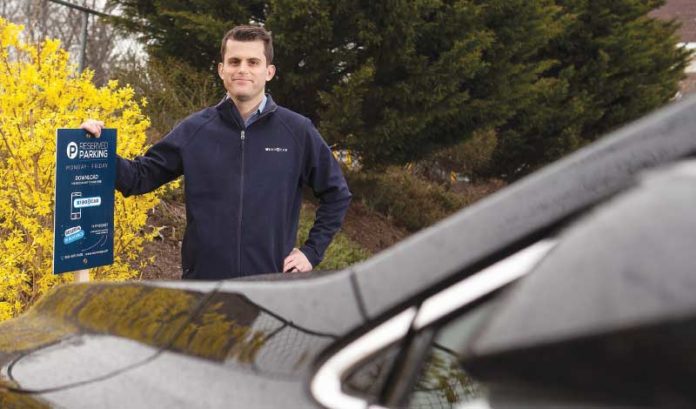 Many entrepreneurs have transformed garages into squeaky office chair- and computer-equipped startup centers. It’s well-traveled territory for businesses getting their start.

Joe Colangelo’s own startup story has a twist on that trope: His business began in his driveway. There was a car parked in it, and not even his own.

Boxcar, the business Colangelo now heads as CEO, started with him renting out the driveway at his Cranford residence to people traveling to New York City by train.

It was a bit of extra money. And, if he wasn’t using it, why not? As it turns out, a lot of property owners who have extra parking available during the week look at it the same way.

Like AirBnB, Colangelo’s Boxcar has experienced early success with a platform that allows people to rent out space that’s not in use, just as he did.

“We’re really focused on helping people who are commuting from the suburbs into New York or elsewhere and taking public transit to get there,” Colangelo said. “It’s a seamless experience with an app that allows people to reserve parking spots next to busy train stations and have that guaranteed as a reservation, no matter when they show up in the morning.”

From the confines of Colangelo’s driveway, the business has grown to serve 25 towns in New Jersey and municipalities in several surrounding states. Boxcar has reached 5,000 customers, a group that makes roughly 500 parking spot reservations each day.

Acquiring more customers isn’t the hard part. Limited parking options for commuters around the Garden State makes the need obvious. The company had 8,000 reservations through the new app last month and expects to double that in May.

So far, religious centers have been some of Boxcar’s most eager participants.

“Churches are big for us, because they have empty parking lots Monday through Friday,” he said. “They’re also always looking for additional sources of revenue. It’s a win-win: The church makes money and we’re able to grow our business.”

Boxcar makes it worthwhile for the property renting out parking. If someone is paying $6 for the day, Boxcar keeps $1.50 and the remainder of the share goes to the facility.

Amid towns and cities pushing back against the use of so-called “sharing economy” services such as AirBnB, Colangelo said he has been pleasantly surprised with how his own service remains in local leaders’ good graces.

“Part of that is because we don’t go into somewhere without talking to municipalities first and explaining what we do,” Colangelo added. “By going to the town first, we head off a lot of problems. We don’t do anything incongruent with zoning or culture of a town. So, we go from them not loving a new company operating in town to someone who is an advocate for us.”

It helps that towns are seeing the value in the service in material terms, as Colangelo explained.

“New Canaan, Connecticut, was ready to build this parking garage that would’ve cost more than $10 million,” he said. “We approached them about our solution, and then they canceled plans for that garage. … This is especially important in a day and age when we’re looking at a future of maybe there being less of a need for large parking garages as autonomous vehicles and ride-sharing services grow in size and importance.”

It won’t take long before more towns are apprised of the app, given that it’s expanding from just doing parking near public transit hubs to adding parking around events and the Jersey Shore. This opens up a revenue stream for the app and its participating properties outside of the weekday commute.

Colangelo has come a long way with the early entrepreneurial venture that had him handing out fliers at local train stations.

“And still we haven’t seen other startups that are focused on mobility issues in suburban areas in the way we are,” he said. “Even with the birth of the sharing economy, it’s a problem that’s only starting to be tackled.”

Boxcar CEO Joe Colangelo, co-founder and chief operating officer Owen Lee and the rest of the small startup team have their own commute to make.

They travel to what Colangelo believes is an epicenter of the state’s startup ecosystem — the coworking space offered by Newark Venture Partners at Rutgers Business School in Newark.

“Being here, we surround ourselves with a lot of other forward-thinking technology companies in New Jersey,” he said.

The Boxcar team does a lot of thinking about how people commute as well as where they work in the state. That brainstorming led the startup to introduce an added service allowing people to reserve office space and spots at coworking facilities like the one they work in.

“We haven’t done any big announcements about it yet,” Colangelo said. “But we have a people taking advantage of it already.”

Emerging food companies get their chance to shine at Mazars’ food...