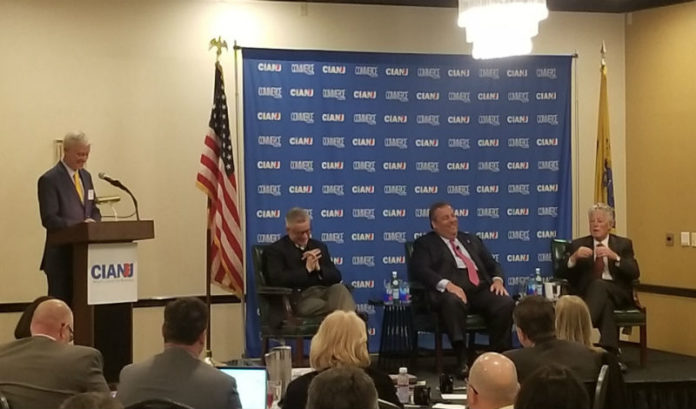 Three former governors responded to news that Gov. Phil Murphy called for the resignation of government appointees on the board of the New Jersey Economic Development Authority at a Commerce and Industry Association of New Jersey event on Wednesday.

Governors Chris Christie, Jim Florio and Jim McGreevey all cited Camden’s success as the reason to continue supporting the EDA, and criticized the emphasis placed on a whistleblower report and an audit from the State Comptroller’s Office.

Florio said the business incentives have yielded good outcomes, but any need for greater accountability should result in a modification of programs rather than taking them away.

McGreevey agreed, adding that he recalled when Camden was an unsafe place to simply walk around in, and that the EDA helps the state stay competitive.

Christie was less focused on the EDA and targeted Murphy, criticizing the basis of the governor’s shakeup of the EDA.

“What we have going on is a political assassination by the current administration,” Christie said.

Christie emphasized that the EDA has lasted through several governors without any issues known, and has had a 110% return on tax incentives to the state. The comptroller said as much when questioned if the net benefit analysis has been violated in applications approved by the EDA, Christie said.

“This is what the comptroller said, ‘As I described in the 48 sample projects we looked at, each of which has been approved by an incentive award by the EDA, and at least received one incentive award so far, OSC found no evidence that any of the projects in its sample failed to satisfy the net benefit analysis test.’ If you listened to the governor, you would think that we were giving away money and getting nothing in return,” Christie said.

The comptroller’s report highlighted a lack of internal controls, which would skew available data that resulted in any claims of satisfying the net benefit analysis.

In response to that question from reporters after the event, Christie said, “These are facts. The Murphy administration is not using facts. And then to call, last night, only the Republican commissioners who voted the exact way the Democratic commissioners voted and threaten them, and that’s what they did, I can tell you because I spoke with them. They said there was going to be bad stuff out there until you quit now.”

Christie said Murphy was hurting the reputations of the current EDA board members as well as Laurence Downes, board chairman, who recently resigned. Christie also pointed to the key connections of some of the board members, and suggested Murphy refrain from going after them.

“The governor is vilifying good people who are serving without compensation for the betterment of the business community in this state,” Christie said.

Florio said the criticisms from the audit discount the “unmitigated successes” around the state.

“If the program needs to be modified, modify it,” he said.

In response to the comments Wednesday, Murphy spokesman Dan Bryan said he was not surprised by the criticisms from Christie.

“A longtime employee of the EDA also said under oath that members of Christie’s Administration pressured them relentlessly to award incentives despite the objections of EDA staff. Clearly, in the Christie Administration, policy and fact-based analysis took a backseat to backroom political deals, which resulted in an economy that lagged behind in nearly every economic indicator, including ranking 49th in wage growth and 42nd in employment growth. Governor Murphy is committed to turning the page from the disastrous economic policies of the Christie Administration, and has put forward a plan that ensures targeted incentives play a role in smart economic development that rebuilds New Jersey’s economy from the middle class out.”

Murphy to require all those doing business with N.J. to be...

Inside the GSI Report: Conn.’s fiscal crisis is cautionary tale for...