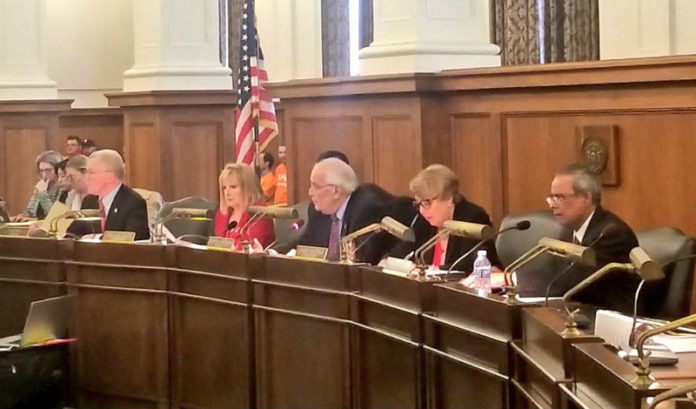 The Board of Public Utilities approved subsidies for nuclear energy in a 4-1 vote in a packed Statehouse committee room Thursday.

The commissioners voted to approve the Zero Emission Credits for the applications of the three nuclear plants, which would allow Public Service Enterprise Group and Exelon to increase their rates by $0.004 per kilowatt-hour. The increase could add up to roughly $300 million per year for the next three years.

Under the legislation, which was passed last year and signed into law by Gov. Phil Murphy, the BPU was tasked with reviewing the applications within 330 days for five criteria — including for New Jersey utilities who operate nuclear plants out of state. 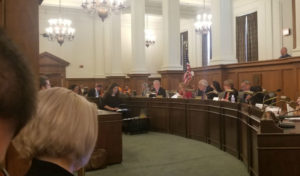 The BPU staff evaluated the idea of the loss of the three nuclear plants in the state based on air quality impact and financial viability.

If all three nuclear plants in the state were to shut down, there would be a 9.6% carbon dioxide increase in the state and region through 2022, according to BPU staff at the meeting Wednesday.

But there is no industry standard of what a “significant” impact is, so the decision of awarding a subsidy is on the board of commissioners.

Regarding the financial stability, BPU staff determined that there is enough fuel material in the three nuclear plants to last for five to seven years, plus overhead costs for labor and improvements. Though there are market factors that could be favorable to energy generators in the future, BPU staff evaluated the subsidy applications based on current market conditions.

“The units are financially viable as they stand now,” BPU staff said, adding that based on financial viability, the plants should not receive the subsidy.

BPU president Joseph Fiordaliso said PSEG has expressed that it cannot continue to operate the plants, and the BPU is responsible for determining operations risks, such as costs and market risks.

“Right now, PSEG provides 32% (of nuclear energy) in the state and makes up 90% of our clean energy portfolio,” Fiordaliso said, in his recommendation of approval.

The BPU should consider the impact of the utility, plus fuel diversity, he said.

“Other than increasing the supply of natural gas, there are no other viable immediate replacements for nuclear power at this time,” Fiordaliso said.

The loss of the state’s three plants would result in the loss of 750 to 1,500 jobs and impact the electric grid on a regional basis, he said.

Commissioner Dianne Solomon said she recommended approval as well because the federal level has failed to establish a credit program, which puts the responsibility on the state.

But, Solomon said, the legislature and governor have tied the BPU’s hands in its pursuit of approving the ZECs because there is no wiggle room for the cost to ratepayers.

The subsidy bill does not allow a change to the “amount of subsidy, that will enable nuclear generation to be profitable and competitive while accounting for the unique and verifiable environmental benefits attributable to nuclear generation,” she said. “Because I believe some level of subsidy is warranted … I will reluctantly vote yes.”

Commissioner Bob Gordon said the decision he faced was essentially allowing greater air pollution in the state or increasing the cost of living and doing business in the state.

“The board is being directed to pay ransom and the hostages are the residents of New Jersey,” Gordon, a former state Senator, said, in his support of the ZECs.

“Ultimately, for me, the environmental and health risks outweigh the economic implications.”

Commissioner Upendra Chivukula questioned the staff’s analysis of air quality impact while highlighting the $12 million annual salary of Ralph Izzo, the CEO of PSEG, as proof the utility is not financially struggling.

In recalling his own life story, Chivukula, a former Assemblyman, said he understands the struggle of poor people, having experienced the struggle as a child in India.

“I will not let down the poor people of New Jersey,” Chivukula said, adding that the three plants do not need subsidies at this time.

“These subsidies are going to directly hit the ratepayers of the state of New Jersey.”

Chivukula also said the state already has met its goals to curb greenhouse gas emissions, so the air quality is not an immediate concern.

Commissioner Mary-Anna Holden said her concerns were focused on the economic loss from jobs lost and population lost for the Salem County area, equating the potential future to Titusville, Florida, where the region is “struggling to redefine itself” after closing a plant.

“The goal to me is to keep these valued assets operations,” she said, in her recommendation to approve the subsidy.

The BPU has said previously that the total amount of the ZEC could be less than $300 million, and any over-collection, based on the increased rate, would be refunded to ratepayers annually.

New Jersey is not the first state to approve ZECs, which have been pursued at the state level in recent years as movement on similar credits have been stalled at the federal level.

The issue over whether not taxpayers, who are also ratepayers, should subsidize the utilities’ assets is one that some business leaders support.

Tom Bracken, president of the New Jersey Chamber of Commerce, told ROI-NJ that even though the cost for taxpayers and ratepayers will increase, it is a known unit increase.

The loss of 40% of energy production in the state, and what that gets replaced with, would result in an unknown increase, Bracken said.

Sierra Club director Jeff Tittel said the move is a negative one for the state and is at odds with the governor’s renewable energy goals.

“This is going to determine the energy policy for the state for generations,” he said.

“Passing the subsidy is greed not need, and its’s going to put a chill, moving forward, on the solar and offshore wind industries. Under this (subsidy), you can’t get to 100% renewable because 40% has to remain nuclear.”

Life at the League: Football-field-sized room of exhibitors offering every product...

The unique way Amtrak’s Coscia plans to get Gateway done