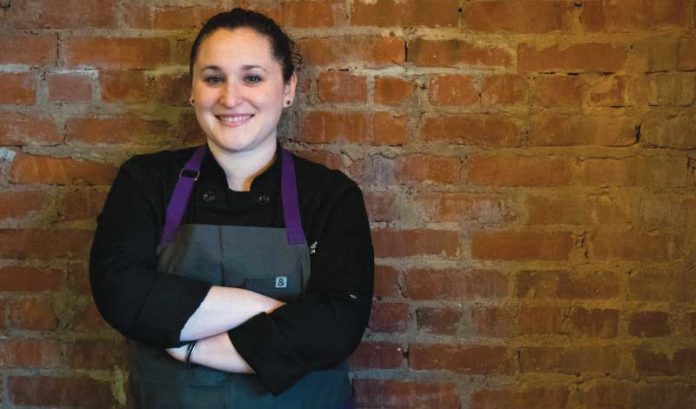 When she was 28 years old, Risa Magid Boyer said she was able to effectively combine her love for food and art by opening her popular dessert-first restaurant concept in Montclair.

The trade-off, of course, was balance.

Days off are rare and 12-hour shifts are the norm at Vanillamore.

Boyer, however, said there is nothing else she would rather do.

“I grew up loving food without realizing I could make it into a career,” she said.

Boyer, owner and executive chef, said she puts extraordinary and innovative desserts at the center of the menu, with healthy and seasonal savory food to complement.

Her sweet tooth, however, most likely is inherited. Her grandmother, Boyer said, was a cake decorator; her grandfather’s family owned bakeries in Poland for generations; and her parents founded a retail chocolate business in New Jersey in the mid-1980s.

But Boyer initially chose to study graphic design at Northeastern University, until she realized that the line cook job she got at a nearby restaurant in her sophomore year was more fun than attending class.

“I love tactile and tangible art, but I was studying graphic design and sitting in front of a computer all day,” she said.

Boyer ultimately decided to leave to combine her love for food and art at the Culinary Institute of America, from which she graduated in 2011, and began working in nearly half a dozen New York City and New Jersey restaurants.

“But, when I worked for a very high-end Italian restaurant for a very short period of time, I saw how the kitchen operated and hated the environment,” Boyer said. “I was by myself on the pastry line, I wasn’t learning from anyone and it was very male-dominated.”

Boyer said she decided to become a pastry instructor and resident chef at Sur La Table in Canton, Connecticut.

“I wasn’t just teaching pastry classes and I was therefore able to dabble with both sweet and savory dishes while managing the program,” she said. “And you can learn a lot about how certain methods work by having to fix other people’s mistakes.”

Upon returning to New Jersey, Boyer became the pastry chef at De Novo European Pub in Montclair, as well as opened a small specialty desserts business while working on the concept for her own restaurant.

Vanillamore, an open-concept, full-service restaurant and kitchen complete with a large semicircular counter and up to 50 seats, opened in September 2017.

“In the beginning, people thought we were a bakery and people still sometimes come in here thinking we just sell desserts,” Boyer said. “But we knew there would be an educational component and we knew that we would have to really explain who we are and what we do differently.”

Yes, one still can order ahead a variety of signature 6-inch cakes for $45 each, and yes, the restaurant does still serve a variety of hot chocolates and other specialty beverages.

But Vanillamore is exactly that — more.

For example, one can order the $9 house-made ricotta or the $11 brie and fig toast for lunch or even make reservations for dinner to enjoy the $28 red wine braised short ribs with sautéed spinach and cauliflower-leek puree.

But the pièce de résistance is, of course, Vanillamore’s dessert-oriented menu, featuring “Tapas,” such as the $12 Milk & Cookies (a half-dozen espresso hazelnut mousse, chocolate chip and ginger-molasses cookies served alongside vanilla malted milk); “Flights,” such as the $12 Winter Citrus (a sampling of desserts including a fruity tartlet, a refreshing lemon-pudding cake and a sweet polenta upside-down cake); and “Charcuterie,” such as the $24 Chocolate Charcuterie (featuring Vanillamore’s dark and milk chocolate dessert “salamis,” as well as a collection of breads, cookies, cakes, and candied fruit and nuts).

“These days, we can flip the counter up to five times on a Saturday night and, during the dinner rush, we can turn the dining tables about three times,” Boyer said.

“Not to mention personalities are really difficult to mesh in a high-pressure kitchen,” she said. “So, I’m here basically 24/7; my mom is here almost every night; my husband is here a couple nights a week; and my dad is here all weekend.

“It’s how a small business has to operate — super-lean and super-mean.”

Montclair business owners, however, also have been incredibly supportive of her work, Boyer said, including other restaurateurs.

“It’s not about competition here,” she said. “The more options there are in town, the more people will want to visit.”

That is why Boyer said she loves to give back to the community, such as donating 5% of Vanillamore’s sales every Tuesday to a worthy cause, including the Montclair Fund for Educational Excellence.

She also said she only would consider a new location in town.

“We currently are only limited by our kitchen size and seating options, so, if there were an opportunity to move to a bigger space in town, that definitely would be within our three- to five-year plan,” Boyer said.

Now 30, Boyer said she also hopes to start planning for something else: a family.

“I would love kids,” she said. “But, while people are typically challenged with balance and child care, I could not even imagine being pregnant and doing what I am doing right now. I mean, how do you physically carry a child while working 90 hours a week in a busy kitchen? That’s not safe, healthy or realistic.

“But there has to be a way to figure it out and make it work at some point because that is what I want in my life.”

N.J. right in the thick of things as offshore wind begins...