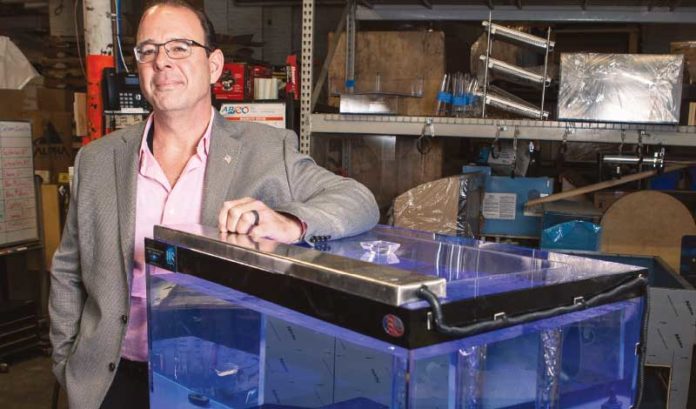 In 2014, Thomas Olsen cashed out all of the investments and emptied the savings accounts he had built up over 25 years of working in the supermarket industry to purchase a business of his own.

He said it was the best — and the easiest — decision he ever made.

Olsen, who had spent the majority of his professional career working as a manager and merchandiser in the seafood department for Wakefern Food Corp., jumped at the chance to purchase Lobster Life Systems, one of the only full-service lobster tank and supply manufacturers in the country.

The tanks you see in the restaurants and supermarkets? They most likely came from Olsen’s Lodi-based company.

“I bought it with my own capital and a promissory note with the previous owner,” he said. “Like most entrepreneurs, my wife and I cashed out all of our investments and equity in order to make the down payment. We believed in the business that much.

“The opportunity presented itself and we figured out how to make it happen.”

Nearly five years later, Olsen said he has increased the size of his staff to 15 and has more than doubled the company’s revenue, making it a $2 million business.

Its success, he said, is based on filling a small niche in the food service industry.

“Procurement managers are exceptionally busy,” he said. “A lobster tank, or its filtration supplies, is such a small piece to the overall puzzle. That small puzzle piece is our niche.

“We make their jobs easier so they can focus on bigger, more expensive pieces of equipment.”

Olsen, the company’s owner and president, understands that his small niche also could be his undoing. It’s why he wants to diversify moving forward.

“We recognize that our business right now relies solely on the lobster market,” he said. “The biggest potential challenge we face is that of Mother Nature, who at any time could decide to wipe out the market in the Northeast.

“Now, that is highly unlikely, but it still presents a risk we should consider.”

LLS Inc.’s bread and butter, Olsen said, is the manufacturing of specially-designed tanks for lobsters, shellfish and fish as well as marine salt, filters, activated carbon and other supplies for aquariums.

“We are just one of three companies in the country that manufactures lobster tanks for major supermarkets,” Olsen said. “However, we are the only one who provides service and manufactures our supplies in-house.”

“We sell, on average, three tanks per month and approximately 25,000 pounds of salt per week,” he said. “Our service calls average five per week, but we have over 500 supermarkets with preventive maintenance contracts.”

While LLS Inc. sells to both the United States and Canada, the company currently maintains and services tanks from Maine to Maryland and from New Hampshire to Indiana, Olsen said.

“We recently expanded service into Ohio and Indiana within the past six months and are now focusing on expanding our service to the Carolinas,” Olsen said.

LLS Inc. does all of this with just 15 full-time employees, including five staff technicians (one each in New Jersey, New York and Western Pennsylvania and two in Connecticut.)

LLS Inc. gets calls for a variety of reasons. The biggest: Stores don’t have staffs that can do the work themselves.

“Grocery stores are currently faced with labor shortages,” Olsen said. “The fact that each of our technicians comes from the supermarket industry is extremely beneficial.

“They can speak the same language and understand completely the challenges our clients are facing.”

Olsen said a well-maintained lobster tank will last 12-15 years, but most supermarkets replace their equipment every 8-10 years, which is the average life of a store’s décor and layout.

Olsen said both high quality customer service and expanded service offerings are key to the success of his business.

“We service every major supermarket from Hannaford up in Maine to Publix down in Maryland,” he said. “We manufacture custom-made lobster tank maintenance kits for Publix, for example, and Hannaford purchases our supplies — that, in turn, gives us so much opportunity to expand our business once I can start having conversations with stores about why they should switch over from what they are currently using to our full-service lobster tanks.”

LLS Inc. has been growing in this way nearly 25 percent each year.

Olsen said that, while that is good, he believes business can be better and safer by diversifying into new markets.

However, Olsen said LLS Inc., too, has been developing its online sales — just not to grocery stores.

“We are now working to offer our supplies and services online, but it is geared more toward home hobbyists with aquariums,” Olsen said.

The company also expanded into manufacturing the first-to-market display for the sale of live clams and oysters.

But there is a big reason Olsen has started identifying the company as LLS Inc. rather than Lobster Life Systems, he said: The company also owns a custom acrylics fabrication facility in Saddle Brook.

“We manufacture custom acrylics for various retailers throughout the country, whether that be makeup or jewelry cases or shoe displays, and we are looking to expand this side of the business,” Olsen said.

Buying a company can be a huge life transition.

Olsen said he had an advantage.

“I actually was buying Lobster Life Systems tanks and equipment in my line of work then,” Olsen said. “It was a natural fit and extension of what I was doing and, therefore, a great opportunity for me to advance.”

Olsen said he is looking for new opportunities, but he is not jumping at everything.

Still, Olsen said the plan is for LLS Inc. to be servicing states from Maine to South Carolina by the end of this year and, within the next couple of years, to purchase real estate and build to suit in New Jersey rather than continue to rent.

“We’re always looking to hire to support our growth — and if our volume warrants another salary, yes, we will be hiring,” he said.

Study: Most businesses say a quarter of energy will be generated...