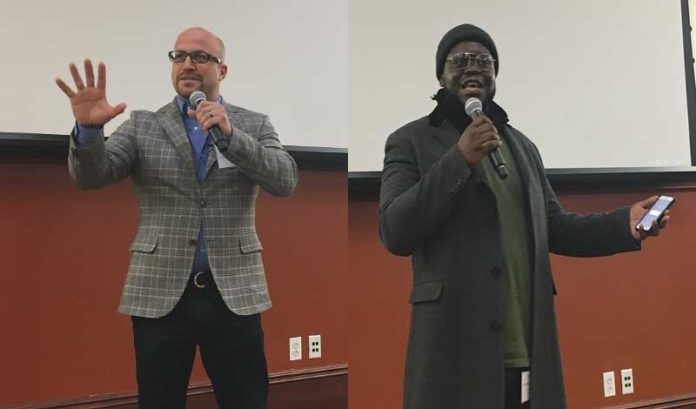 Four dynamic speakers came to the Montclair Entrepreneurs Meetup last month to share their entrepreneurial stories with the students and community members assembled there. Each entrepreneur was introduced by Sharon Waters, interim director and program manager at Montclair State University’s Feliciano Center for Entrepreneurship, and gave a timed presentation.

Anthony Frasier, the CEO of ABF Creative in Newark, which creates branded podcasts for corporations, said a gaming website he and some friends founded helped him get an internship at a startup, where he learned how to talk to developers, how to become a real CEO of a company and the wrong and right things to do.

A year and a half later, the startup failed, and “I learned that 80 percent of startups fail. That was something I wasn’t used to. Failure where I came from didn’t mean you could start up something again so fast.” Frasier had a backup plan, though. The startup’s Russian investor — a big guy that you could meet with only if you agreed to drink with him — gave him a chance, and invested $100,000 in Frasier’s new startup, called “Playd,” which was a loyalty system for video games.

“That was the best thing that ever happened to me, and the worst thing that ever happened to me,” he said, explaining that he was young and didn’t understand the investor relationship. Frasier learned that his investor had acquired a large chunk of the company without his knowing it. “I didn’t really discover this until I had Silicon Valley lawyers help me.” He told the students in the audience to look out for the “paper gangsters,” and to make sure to have their agreements vetted by lawyers.

Mike Luzio on turning a sales career into BUSINESS success

Mike Luzio, cofounder and managing director of The LVE Group in Holmdel, took some advice from a mentor who told him to go into sales. When he was making some money doing it, he thought it was the right field for him.

And, when the dot-com bubble burst, Luzio realized that he needed to work for a large corporation, and joined Sprint, where he was involved in selling telecom to other large corporations. He was doing well at Sprint, and was told, “One day, in 40 years, you can be the CEO of Sprint.” He thought there was no way he’d be staying there for 40 years. Then “someone came to me with an idea when I was 27 years old … and he said, ‘I think we can do this. I think we can go out and start our own company,’” he told the audience.

Luzio and his partner bootstrapped the business from 2004 to 2008, and, when the stock market crashed, “it was miserable,” he recalled. He went to his executive team and told them that they had to accept salary cuts or leave, as the company needed to raise capital on its own. “We didn’t take a salary for a year. From that point on, the company skyrocketed.”

Luzio sold the business for just under $60 million in 2013. He said that it was a humbling experience for a guy from a middle-class background whose father was in law enforcement and whose mother was a teacher.

Clark Lagemann says you are not alone in your struggle

Clark Lagemann, cofounder and managing partner at MedPro Wellness in Cranford, discussed the practices that took him from being a “generic” entrepreneur to a good entrepreneur.

Creating a system to rank doctors paid off, and Lagemann won accolades. “But I was feeling so empty. What no one knew at the time was that we were running out of money; and I was anxious, stressed out and depressed.” Lagemann added that he had felt ashamed because he couldn’t make a go of the company, and he was worried that he would let down his family and that his friends would make fun of him.

To combat his depression, Lagemann decided to enter a triathlon in Sandy Hook. “People were clapping for me,” and he began to get his swagger back. Entrepreneurship is endless, with no discernible finish line, so he chose a race that could give him a successful outcome and build his confidence. The day after the triathlon, he had his confidence back and was pitching again and connecting with clients.

The next year, Lagemann signed up to run in IRONMAN Lake Placid, a 17-hour race in upstate New York. He was up at 4 or 5 in the morning, training, running his business and spending time with family and friends. “I became so disciplined, all distractions went out of my mind.”

Lauren Farrell is the founder and creative director of Lauren Farrell NY in Westfield, which makes fashionable accessories for women who attend sporting events. She told the group that she had learned about entrepreneurship at a class at Lehigh University. “When I was there, I recognized it was the perfect blend of creativity and business,” she said. The course included a trip to Silicon Valley, where the students got to meet entrepreneurs, and she observed that they all had “this amazing intangible energy and passion that I wanted.”

Farrell learned that an idea will often be sparked by some personal need. In college, “I wasn’t bringing anything out of the dorm besides a credit card, a car key and my room swipe.” She applied for a patent and developed a wrist wallet that looks like a cuffed bracelet. “The idea was to bring your essentials with you in a functional, but fashion-forward way.”

Farrell was the manager of the men’s lacrosse team at Lehigh, and she recalled that a headhunter told her to take that information off her resume before she went to a job interview. However, it was that quirky detail that made her stand out and land a job at Gucci. Also, while she managed the team, she found another problem to solve: All the moms and girlfriends wanted to wear the team colors without necessarily wearing a T-shirt or a jersey. That planted the seed for her future fashion venture.

Recruiting with a purpose: Why Verisk decided to bag the swag...