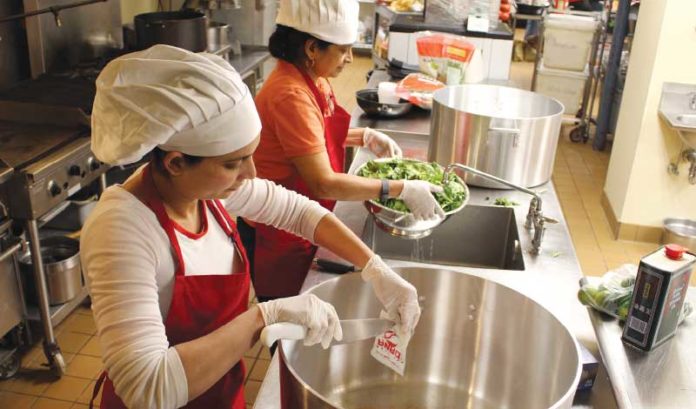 Poonam Rai understands the demands of a busy work day and the time constraints it places on working couples and their families.

It’s why she started The Tiffin Blog in 2006, well before meal kits were en vogue.

The idea for her business wasn’t new, though. Tiffins have existed for decades in India as a way of delivering a hot, home-cooked meal at lunchtime to the working individual.

The word “tiffin,” to most South Asians, conjures images of a multitier steel lunch case. But, in the U.S., that has been replaced by plastic take-home containers or vacuum-sealed packages of food.

What has remained the same is the healthy, home-cooked meal.

And there has been a sort of unofficial standard set by the existing companies in New Jersey that offer these weekly meal packages.

Each company official who spoke with ROI-NJ offered some sort of weekly menu of vegetarian and nonvegetarian dishes, complete with roti or rice or both, that is typically prepared on Saturday and delivered on Sunday.

The prices vary, but most average about $10 per day. Some companies have created even more variety by offering foods from different regions of India or by offering different sizes to fit the meal needs of a student versus a family.

Many of the entrepreneurs began their business idea with a personal story of wanting to provide healthier Indian meals for busy people.

For Rai, for example, this is a second career.

When Rai emigrated from India to Manhattan in 1998, she would regularly eat out with her husband, since the two worked long hours. She owned a garment business and he was an attorney.

In 2005, she sold her business, had a son, and the couple moved to Long Hill. She thought she would retire to mom life, but that lasted for about a year before she cooked up the idea of a tiffin service.

At that time, the only options for Indian meals were either restaurants or hiring a cook — typically housewives who offered to cook either daily meals or a week’s worth of food.

Those services still exist today in areas such as Jersey City and Edison. But they didn’t work logistically for Rai.

“I tried bringing ladies home, but then that was a headache because none of them drove, so I had to still shop for groceries and pick them up,” Rai said.

“My whole Sunday would go in doing that.”

That’s when she decided to bring her mother over from India and take a crash course in cooking.

“My mother was a chef in India, so she used to teach cooking in a school,” Rai said.

“I got her here and we started thinking about the weekly tiffin idea. That’s when I learned to cook. I kept (my mother) here for six months and learned from her. Now, I just manage the business, but the recipes are all my family’s recipes from my grandmother and my mother.”

At the time the Tiffin Blog launched, the South Asian population outside the known concentrations — such as Edison and Woodbridge — was sparse

“In Long Hill, where I live, we came here in 2005 (and) there were hardly any Indians,” Rai said. “Now, I see them everywhere. A lot of Indians have been moving in because the school systems are so good here. Our customer base has been growing, too.”

The company’s customer base has grown at a comfortable 10 to 15 percent each year, especially after 2010, she said.

And it is comprised of all South Asians, who make up less than 10 percent of the state’s population.

When she launched the company in 2006, it was pre-Facebook and -Google ads and food delivery apps. Her company grew by word of mouth, and because she was offering something different from a regular take-out service at a restaurant.

“Demand for fresh foods will always be there,” she said. “Customers love our food because we kept it homestyle, like how food should be. Not out of cans, no artificial things.”

The demand can be easily quantified in other ways.

She also has successfully opened a limited-menu restaurant in Short Hills, fashioned after the Subway and Chipotle style of ordering food, called Curry Tub, with a second location slated for Bridgewater this month.

But, she emphasized, the food served there remains authentic to the brand’s homestyle cooking.

Indian restaurants have offered lunchtime deals and delivery services; some even call them tiffin services.

Rai, however, said the product isn’t the authentic, simple and healthy food she and others offer.

Neal Raval has had a similar experience in this space.

As owner of My Tiffin Express in Plainsboro, he has seen how the demand for healthy foods has grown, with consumers growing smarter about the oils and food coloring used in restaurant food.

“I lived in Michigan, and finding good, healthy Indian staple food has always been a challenge. There are a few options out there, but it’s predominantly restaurants doing delivery service. The food is essentially restaurant food, so it has a commercial undertone.”

That rich and spicy food is great to have occasionally, he said, but the daily intake can be seen in the calorie and carbohydrate buildup.

“I wanted to solve that problem,” Raval said. “There are still a lot of restaurants who use the word tiffin and just repurpose restaurant food. This is a legitimate service. This is the tiffin your mom would pack you.”

It wasn’t an easy business to start.

The learning curve included things such as how to set the standard for mild, medium and hot levels of spice — since everyone’s tolerance is different. But it also included learning customer habits.

It’s here that Raval, who launched his business a year ago, feels he has an advantage.

A financial and data analytics person, Raval knew he needed to understand his customers and how to grow them. He has spent a lot of time analyzing data.

These numbers helped him with targeted Facebook and Google ads at the outset, but he soon realized that can only reach so many people. So, he took a step in the old-school direction of setting up booths at cultural fairs.

“When it comes to food, people have 100 questions, and rightfully so,” Raval said.

“One of the trends we’ve seen with the Southeast Asian community is that they have become very health-centric,” he said. “People are asking the right questions. They are asking what kind of oil we use, or they say we are using too much oil. They want to make sure the salt content is less. Things like that.

“It was very taste-driven in the past, which is what Indian food is known for. But, in the past few years, the younger individuals are becoming extremely health-conscious and consuming the right food prepared in the right way.”

Tiffin service and Indian food service is increasingly a competitive space in which to operate.

While Rai has focused on expanding the brick-and-mortar side, Raval has his sights set on franchising the brand.

Raval founded the company with $29,000 of his own investment, and he is looking for outside capital to help expand his New Brunswick business.

He currently employs nine people, including a team of drivers, a web and operations team and the chefs. Costs are kept low with the use of a commercial kitchen and hiring methods.

“It Is tricky to source for human capital, but we do a lot of job portals,” Raval said. “Especially with Uber, drivers are hard. They are either corporate and subcontracting this out to smaller players or doing Uber or something like that. We are finding people on job portals, Craigslist or Facebook.”

Even with those drawbacks, My Tiffin Express has had 1,000 unique customers in its first year, Raval said.

And, he said, there already are conversations with people in Brooklyn and Atlanta who want to create their own teams to handle the cooking, fulfillment and delivery, while using the online portal to place and receive payments for orders.

And he has his sights set as far as the Bay Area in California for one simple reason: That’s where the largest market is.

“We want to be able to create a model that is scalable in nature, not just New Jersey- or Central Jersey-centric.”

Survey: 83% of consumers are cutting back on personal spending, travel due to inflation