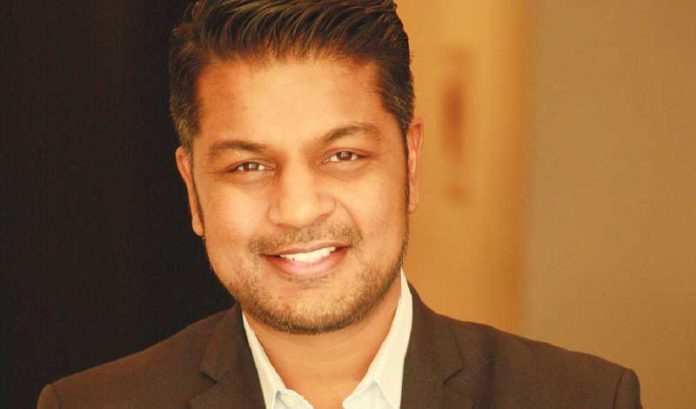 Richie Etwaru built his first company at the age of 23. He stumbled upon a way to make money by requesting driver records from the DMV and selling them to companies that needed it to comply with various mandates.

But there was a problem: it was easy. Too easy, in fact.

“I remember thinking: There’s something wrong here,” he said. “I’m making money off the data of these drivers, but shouldn’t they have the awareness and control to know their data is being monetized this way? They should, at a minimum, share in that value somehow.”

That was the first inspiration that led Etwaru, now 43, to co-founding Hu-manity.co, a startup that wants to disrupt nearly every business sector by allowing individuals to control their personal data and potentially make money off it, too.

Etwaru, who serves as CEO of the Princeton-based company, has a long list of moments that similarly inspired him in the two decades leading up to the startup’s launch. He worked on Wall Street and oversaw the purchasing of consumer data as that model found its footing, and then got into the frenzied digital data trade going on in health care.

“Then, a year ago, I mustered up the courage to start a venture and do, in some ways, the opposite of what I’ve been doing the past 20 years,” he said. “Instead of helping to monetize data of consumers who don’t have the option to share in the upside, I wanted to start a company that would bring consumers into the supply chain.”

Normally, personal data such as someone’s medical information is collected for treatment before it’s then aggregated by pharmaceutical companies and related sectors. There’s easy money to be made off this data, as Etwaru has found out himself. His idea with Hu-manity.co is to allow consumers to lay out preferences for how that data is disseminated.

Contrary to being against it, an industry such as pharmaceuticals has viewed the platform with a high amount of intrigue, Etwaru said. These companies have never been offered fully consented patient data at this scale before. Instead, the industry has relied on data stripped of patient identification — as a result of patient privacy laws — and often riddled with errors.

“That masking of information makes it difficult for these companies trying to find cures for complex diseases,” he said. “So, there’s a motivated buy-side in the industry. Pharmaceutical companies are willing to pay consumers for authorization, so they can improve the data they’re working with. They want high-quality data, free of mistakes.”

There are companies that act as data brokers for other businesses in a way that sidelines the people whose data it is. By working directly with consumers and facilitating the negotiation of what someone’s data might be worth, Hu-manity.co is doing something different.

Depending on what purpose data is being put to, Hu-manity.co’s users can potentially make $100 to $200 just by leasing consent to pharmaceutical companies eager to use their personal information.

“It’s not a lot of money — but it can pay a Netflix bill,” Etwaru said. “And that’s just health care data. There are other industries where your data might have value, as well.”

Of course, users on this new platform can also choose not to make money from the data if it’s being utilized for certain research purposes. Or they can opt to never lend out their information.

Right now, Hu-manity.co is focused on the health care industry. Data in an industry such as financial services is a little more complex, Etwaru said. For instance, credit report data is being collected and sold even to the people whose data it belongs to.

Still, Etwaru expects that the company will be expanding to other industries, especially because more industries are collecting a wider range of data all of the time.

“Every time I open the door to my refrigerator with Wi-Fi, it’s sending some data back to the manufacturer,” Etwaru said. “So, there’s all this apparently valuable data out there — and we ought to be cut into the deal.”

For the company to grow in the way it wants to, public opinion has to boil over. There have been scandals in headlines about potentially clandestine use of consumer data without authorization or people ever being apprised of it, but Etwaru said some education is still needed about this issue.

He added that, once there’s a more widespread awareness of how consumer data is collected and sold without consent, moving from just the health care industry to other sectors will be made easier.

“We’ll always believe health care data is universal enough that once consumers get a taste of having control over their data, they’re going to expect it from their data sets in other industries, too,” he said. “That will lower the amount of overhead needed as we go from one industry to another.”

Even with expansion in mind, Etwaru expects to remain rooted in the Garden State. Part of it is that he and his cofounder are longtime Jerseyans.

“There’s also a bit of a tricky rationale involving the echo chamber that Silicon Valley can be on the West Coast,” he said. “A large percentage of Silicon Valley’s business model is: We’re good because we have the data. That’s the culture. So, it’s hard to get people brought around the idea that maybe that’s not what’s best for the future.”

Etwaru often betrays his personal passion for the company’s mission. He believes strongly that there’s a dangerous precedent that’s being set on data in the digital world. It’s a humanitarian issue, he said, hence the company’s name. And its guiding philosophy stems from Etwaru being a big student of history.

“In the 1600s, if you wrote an article or book, it wasn’t your property,” he explained. “There was a famous starving artist call to action — that led to the Statute of Monopolies in 1623. If you look far forward in history, today we have patents, copyrights and you own your creativity. That was a collective formation to renegotiate with the powers around something that comes from us.”

In Etwaru’s eyes, Hu-manity.co is the sort of reevaluation that history now calls for.