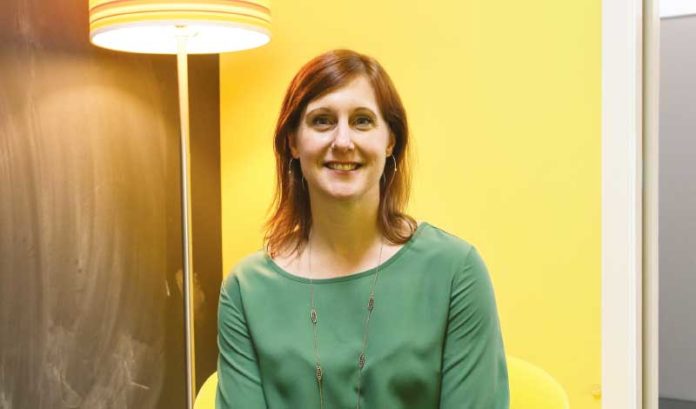 According to the American Institute of Certified Public Accountants, women comprise 50 percent of college accounting program graduates — but less than 25 percent of women are partners at firms.

That is just one of the reasons SKC & Co. in Boonton Township stands out, Sarah Krom, its managing partner, said.

“We are atypical,” she said.

For one thing, her firm boasts a completely gender-balanced leadership team and an employee base of more than 85 percent women.

Additionally, SKC & Co. — known as “the entrepreneurs’ accounting firm” since 1982 — strives to make work-life balance possible for all, including working parents, Krom said.

“If our employees are happy and fulfilled, they are going to be the best versions of themselves that they can be for our clients,” she said.

Upon graduating from Stockton University, Krom said she began her career at a firm with 25 people.

“By the time I left nearly six years later, there were 75 people and the firm had grown from six partners to 13,” she said.

As space in the boardroom grew smaller, Krom said she sought opportunity to advance elsewhere by joining SKC & Co. in 2010.

“In my previous role, I would go to clients and tell them everything they were doing wrong without being able to help them improve or implement any of the suggestions I was making,” Krom said. “That was frustrating and very unsatisfying.”

SKC & Co.’s model, however, focused on service offerings for businesses.

“We help business owners become their best selves, too, both in how they run their businesses and in achieving their own personal goals,” Krom said. “It is different for every client and therefore a much more exciting, diverse and challenging way to work.”

Krom said she felt she had nothing to lose in starting over in a new environment with new rules. So, at her 90-day review, she told the founder of the firm, Mitchell Sharpe, that she felt “a bit bored.”

“I said, ‘Sure, I have these clients I work with and I’m still learning, but I also like to be challenged,’ ” Krom said.

A few days later, Krom said, Sharpe asked her to run the information technology department — despite not having a degree in IT.

“But I was happy to step in where needed,” she said.

Krom would then take on additional hiring functions, management of the firms’ interns and more.

“As time went on, I took on this director of operations role that hadn’t previously existed while still managing all of my clients,” Krom said. “And Mitch realized that, if I was this committed, I would be a good succession plan.”

Krom became managing partner of the $5 million to $10 million accounting firm in 2015, working with businesses with revenues from $100,000 to $100 million in a variety of industries.

“We care less about the industry in which our clients do business and more about the mindsets of the owners — which is really a product of being able to customize so much of what our clients need,” she said. “We especially love to work with entrepreneurs who are willing to step out of their comfort zone to grow and develop strategic plans, speaking with all of our clients (regularly) to ensure we are always in front of them having important conversations.”

One of which is the overarching theme of change in the gig economy and the future of work.

“You can now have an expansive network of people who work for your company, none of whom live in the same state, which can help to expand the talent pool and allows businesses an edge,” Krom said.

“If you are not a company that is positioned and willing to adapt quickly, you will not be able to remain competitive by only looking at local talent while other businesses think outside of the brick-and-mortar and expand their net to hire employees globally.”

“Companies are more often bringing in high-level accountants to run special projects or short-term tasks they want to accomplish, which I think is exciting, seeing as we also can offer our team to companies in this way,” Krom said. “There is a lot more opportunity to engage with these short-term commitments and one-off consultations without requiring a recurring contract with different businesses.”

SKC & Co. also has pivoted to help its clients spend more time doing what is most valuable for their businesses, Krom said.

“For example, we offer virtual assistant services,” she said. “While we cannot be anybody’s receptionist, we do have event planning and marketing services, for example, as well as the ability to schedule meetings and copywrite in addition to paying bills and invoicing.”

In the near future, Krom said she would like to double her team from 22 to 40 employees — with work benefits being key to the firm’s growth.

“We have pretty demanding expectations of our team in regard to being on-site with clients,” Krom said. “So, for example, we realized it would be beneficial to provide child care for our working mothers.”

“It is a fraction of the cost it would be to replace any of our employees if they chose to leave or work for a company with less demand,” she said. “My overall philosophy is to help our team be the best version of themselves so that we can provide the most value to our clients.

“That is why we have child care, a wellness program and fitness area, professional development programs and flexible work schedules, allowing our employees to work from home or take on part-time or reduced-hour schedules.

“It creates a no-excuses environment in which everyone can be at their best.”

Sarah Krom, managing partner of SKC & Co. in Boonton Township, has served as the youngest president of the New Jersey Society of Certified Public Accountants since June of last year.

“I also am the third woman to serve out of 97 presidents,” Krom said.

Krom said that, when she received a scholarship from the Atlantic/Cape May Chapter of the NJCPA in her senior year of college, she was able to graduate without any student loans.

“I wanted to give back to the organization,” she said.

Therefore, Krom became a member and got involved in various committees, including what is now the Emerging Leaders Council, the strategic planning committee, the scholarship committee and the board of trustees.

“My presence then led me to being nominated for president,” Krom said.