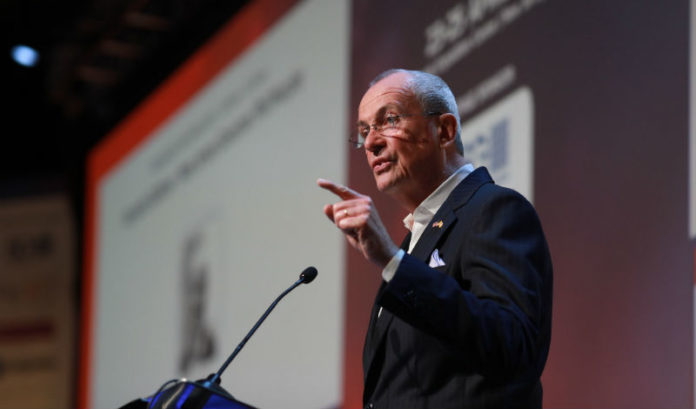 New Jersey’s growing sports betting market took center stage Wednesday in Secaucus, where a conference on the industry was held at the Meadowlands Exposition Center.

Gov. Phil Murphy was the keynote speaker at Betting on Sports America, the first conference on sports betting hosted in the U.S. by United Kingdom-based Sports Betting Community.

“Nationwide, we are in the early days of what is estimated to become a multibillion-dollar market,” Murphy said.

“And that’s just the revenue sports betting operators will earn from hundreds of billions of dollars in bets.”

Since sports betting became legal in New Jersey less than a year ago, the state has seen $2 billion in bets being waged.

That has resulted in more interest in racetracks and casinos, which have seen declines for years. The casinos in Atlantic City have been boosted in the past half-dozen years with the introduction of online gambling revenues, and sports betting has added another layer.

“We have pumped new life and brought new customers to our racetracks and casinos, and our embrace of new technologies, especially mobile platforms, has led to nearly 75% of wagers being placed online,” Murphy said.

“We have catapulted ourselves to being the second sports wagering market in the country. Nevada is clearly in our sites and we can overtake it in its decades-long head start, according to experts, as early as next year.”

Murphy said that in the past year, the state has brought what was an “underground, illegal industry into the light of day.”

The industry has also boosted the state budget, by adding $1.5 million in new tax revenues per month on average, Murphy said.

“It’s welcome revenue for sure, but when we weigh that against a $38 billion state budget, it’s just a drop in the proverbial bucket,” he said.

Murphy credited his predecessor, Gov. Chris Christie, as well as former state Sen. Ray Lesniak, for their roles in taking the legal battle to reverse the ban on sports betting, which went all the way to the U.S. Supreme Court.

“My vision is for New Jersey to continue to lead the way and to continue to be the intellectual and technical capital of online sports wagering in the United States,” Murphy said.

“The place where new technologies are built and proven, the place that other states emulate when creating a regulatory structure that enables the marketplace to thrive.”

A look at the Lobby Club, the pricey, members-only restaurant, bar and meeting place that just opened in Trenton

Wining and dining: How top officials showed site selectors the Hub — and N.J. — is the place to be

For Weiss, opportunity to have even greater impact led him to Newark Alliance

Kaufman, one half of influential Kaufman Zita Group, announces departure