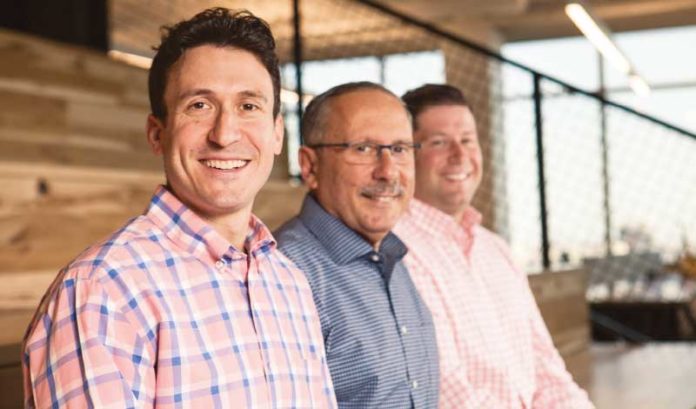 Jeff Braverman said his 90-year-old, third-generation family business has far exceeded all his wildest expectations — except for one.

“The intention now is to become one of the best companies to work for in New Jersey,” he said. “That is my main goal.”

Nuts.com, a leading producer and distributor of high-quality nuts, dried fruit, snacks and pantry staples with revenues between $50 and $100 million, relocated its corporate headquarters to Jersey City in September in search of growing — and retaining — great talent.

And, so far, the move has been a success.

“We’ve been hiring across the board ever since,” Braverman, CEO of Nuts.com, said.

Created by Sol Braverman in 1929, Nuts.com began as the Newark Nut Co., a prosperous vendor in the open-air market on Mulberry Street in Newark.

The business then survived the Great Depression, World War II, a firebombing during the riots of 1967 and two mandated relocations by the city of Newark to allow Sol Braverman’s son, Sandy, to join the business in 1966, followed by Sandy’s brother, Ken, in 1969.

In 1984, Newark Nut Co. was forced by the city of Newark to move indoors, where wholesale business would improve but retail sales would not.

That is why Ken Braverman’s son, Jeff, suggested his father and uncle launch Nuts Online in 1999, before leaving investment banking in 2003 to join and entirely restructure his family’s business into an online-oriented company.

“I think a lot of success is about circumstances, but we also really cared,” Braverman said. “We were the customer, and, so, for me, it was easy to build the business when I actually liked eating the stuff.”

Sandy Braverman’s son, David Braverman, also would join the company in 2003 to head up customer service.

Then, in 2005, due to the construction of the Prudential Center, Nuts Online would again need to relocate — this time choosing to move to a 17,000-square-foot warehouse in Linden.

After five years of 50 percent annual growth, the company would finally move to its current 70,000-square-foot building in Cranford, from which it continues to warehouse, fulfill and distribute thousands of orders daily of nearly 4,000 SKUs, ranging from everyday roasted cashews and nutritious jumbo medjool dates to pili nuts only grown in the volcanic soil of the Philippine peninsula.

Today, while Ken and Sandy Braverman continue to work as executives at the company, their sons are now responsible for transforming and growing the business now known as Nuts.com.

“I discovered Kopper’s Chocolate at Dylan’s Candy Bar and wrote them a letter to become a distributor,” Jeff Braverman said. “We then became their biggest customer.

“So, when they were selling their space — six floors of prime New York City real estate — there came an opportunity to buy the business.”

Nuts.com purchased Kopper’s Chocolate in 2016 before moving the business into its Cranford facilities and taking over the neighboring building as well. David Braverman is now its operations manager, with nearly 200 people still employed in Cranford.

However, Jeff Braverman said he would like to continue to grow Nuts.com this year by 15 percent without further merger and acquisition activity.

“Let’s build the right foundation and, in a few years, we’ll pick our heads up and continue to look around,” he said. “We’ve now got two really great businesses to really get the growth-engine going.”

The key, he said, will be to hone Nuts.com’s focus — despite the fact that more space is always a necessity for a growing business.

“When it comes to our relocation to Jersey City, we wanted to build something for the next 90 years, and, in order to do that, we needed to be able to attract great talent,” Braverman said.

Braverman said he therefore reached out to Marc Lore, founder and CEO of Jet.com and current CEO and president of Walmart eCommerce U.S., for advice.

“Manhattan is far more accessible, but Lore’s opinion was that by being in Jersey City, we naturally would attract the right kind of people,” Braverman said. “If people weren’t willing to come to Jersey City, they could end up being high maintenance, and we wanted the people who were more willing to dig in.”

Braverman said he then visited both New York City and Newark before speaking with Mayor Steven Fulop of Jersey City.

“He put us in touch with Michael DeMarco, CEO of Mack-Cali Realty Corp., to look at a second-floor space over at Harborside,” he said.

Braverman, however, said he was drawn to the cookie-cutter building next to it – which, he came to find out, had a vacant penthouse space on the 28th floor available.

The open floor plan includes a main pantry with a beer tap area, a full coffee bar and (of course) a nut dispensary; a prep kitchen; a yoga and meditation room; both a glass and tree house lounge; a huddle room with custom swings and a turf area; digital lockers; and a dedicated executive elevator.

We have a tremendous ability to influence and affect change, but the question we are focusing on now is, how can we best turn Nuts.com into a really high-functioning organization where people can reach their potential?”

“The office is spectacular and so inspiring when you first walk in, but, frankly, it is simply a small part,” Braverman said. “It is what we do with this space that matters.”

Nuts.com has since hired 70 more people for its Jersey City office, with a focus on marketing, technology, sourcing, creative opportunities and hiring and retention strategies.

With a majority of the team consisting of new employees, Braverman said Nuts.com has been strongly focused on leadership and educational development as well as diversity and inclusion initiatives.

“We also hosted a family dinner last week and assigned seats so that our staff had to sit next to people they did not yet know well to participate in icebreakers and conversation starters,” he said.

Additionally, Braverman said he has taken to hosting weekly business reviews with his team to look closely at metrics, objectives and quantifiable data.

“It is what we do in our daily practice that will allow us to grow and learn together to then accomplish great things,” he said.

Jeff Braverman has four children and David Braverman has three — all of whom are far too young to be making any future career decisions now.

“Still, we’re trying to build something lasting, and, in order to do that, it cannot just be about the Braverman family,” Jeff Braverman said. “It has got to be about building and informing a team with our historical knowledge.

“We have a tremendous ability to influence and affect change, but the question we are focusing on now is, how can we best turn Nuts.com into a really high-functioning organization where people can reach their potential?

“Yes, of course, we need the profits to pay for all of this, but to be able to grow our people — that is fundamentally what I am after.”

“Amazon aggressively goes after every business, so we continuously have to be adding value to our customers and innovating,” he said. “We cannot ever sit still.”

However, the long history of Nuts.com is one of the business’s biggest assets, Braverman added.

“People want the boutique, curated selection and the care that goes into each step,” he said. “And we’ve known farmers for 50 years or more, so we can provide more value to our customers this way.”

Nuts.com also has the ability to remain “human,” Braverman said.

“The beautiful thing is we can continue to talk with our customers as individuals, whereas, with Amazon, it’s difficult to get a human on the phone let alone form a relationship,” he said. “So, the question always is, how can we make what we do that much more of a personable experience?”

N.J.’s energy master plan will triple your bills! Learn why!