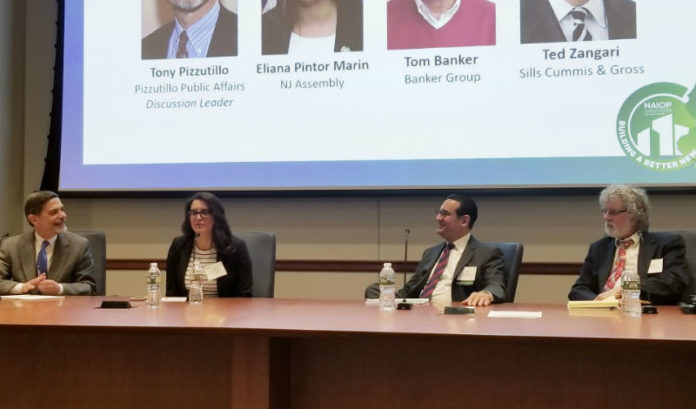 Legislators have been discussing an extension for the timeline to vote on and implement new tax incentive programs in the state, separating it from the budget process, as the start of the new fiscal year approaches.

Assemblywoman Eliana Pintor Marin (D-Newark), the Assembly budget chair, suggested as much Tuesday while speaking on a tax incentives panel at an Edison event held by the New Jersey chapter of real estate group NAIOP.

She said the incentives are too complicated to craft and pass in the 60 days left until the state has to finalize its Fiscal Year 2020 budget, and is requesting an extension to set up five new incentive programs proposed by Gov. Phil Murphy.

“We’ve been having a lot of discussions, and I’ve approached (Assembly Speaker Craig Coughlin, D-Woodbridge) … because I would hate to have this jumbled up with the budget,” Pintor Marin told ROI-NJ.

“We’re probably going to have disagreements on the taxing portion of it or whether or not we can find savings. The program is just very complicated. If we’re really trying to help businesses, and we’re trying to reduce some of the red tape, let’s just do two (programs). If I have to work through the summer on this, I will.”

Pintor Marin, who has sponsored one of the incentive bills, suggested focusing on the replacements to the Economic Redevelopment and Growth and the Grow New Jersey programs, which are set to expire on June 30 — the same day the new budget needs to be passed.

The governor has also outlined three other incentive plans, including a brownfields tax credit, historic preservation credit and an innovation fund.

“I think there’s a lot of room to negotiate,” Pintor Marin said.

“The innovation fund, the tax credits for historical sites, obviously the brownfields is such a huge issue especially with my district … so, I think there is a lot of room.”

State Sen. Troy Singleton (D-Moorestown), who spoke on a separate panel at the NAIOP NJ event, said he, too, supports an extension.

“This is something we have to get done right and we shouldn’t rush it by any deadline, so I would be inclined at this juncture to make sure we have enough runway to get this done, so an extension is appropriate,” he said.

“If the legislative leaders and the Governor’s Office can come together — and I think substantively they’re not as far apart as people think — if they come together and we can meet that deadline, then we should. But the devil is in the details.”

Singleton added that he, as a prime sponsor of the economic act in 2013, believes in tax incentives and their use as tools, but that bad actors should be held accountable.

“We need to make sure we have a framework, a policy framework and a statutory and regulatory framework that allows us to hold individuals accountable,” he said. “Not just for the jobs that are promised and economic growth that is promised, but, when they cheat the system, they are also held accountable.”

Several legislative sources, who spoke to ROI-NJ on background since they were not authorized to speak publicly, said legislative leaders have, in fact, been discussing the idea of the extension as recently as Tuesday, and that some key leaders are on board with the idea.

To-date no bills have been introduced, despite drafts existing as early as November for all five programs.

A spokesperson for the governor said entertaining the idea of an extension is unlikely because the legislature has had enough time to pass the needed bills.

“The governor proposed his economic development package in October and his plan is to move forward with that package,” spokesman Darryl Isherwood told ROI-NJ.

“Two audits and a task force hearing have outlined the flaws in the current system and the bottom line is substantial changes need to be implemented.  Gov. Murphy has made reforming tax incentives a central goal of his administration since day one. The economic development initiative proposed last fall achieves that goal. ”

But Murphy’s task force, which will have its second hearing this week to continue investigating alleged abuses of the existing and previous tax incentive programs, has yet to complete its task.

When setting it up, Murphy previously said it’s role was, in part, to, “help provide a roadmap for how tax incentives can be responsibly designed and implemented going forward.”

But some said that can be resolved through amendments if the new incentives have already been set up before the task force is complete with its investigation.

Michael Egenton, executive vice president of the New Jersey Chamber of Commerce, who attended the event, said the chamber would support an extension.

“We have to have an extension,” he told ROI-NJ.

“Tomorrow is May 1. I know what the next five weeks is going to be. That, and if they try to jump-start marijuana, nothing against the Legislature, but when you put that pressure on somebody to do … the complexity and magnitude of something like that, we need time to get all the right stakeholders, involve the Governor’s Office — but this cannot get embroiled in some of the other major legislative issues that are going to happen.”