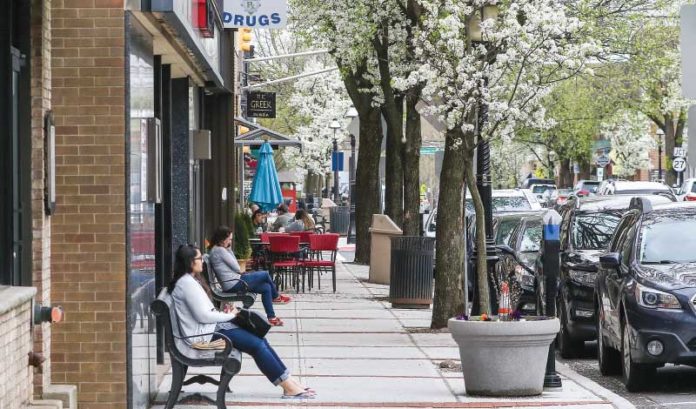 The ruckus of commuter rail systems is familiar to Metuchen.

The sound of cash registers ringing? Not so much.

But with the help of an organization that’s pairing business owners with municipal government and other stakeholders, the tiny transit layover is now making noise.

Kremer is executive director of the organization responsible for re-energizing the borough’s downtown business district — the Metuchen Downtown Alliance. And he said the group, which was only established back in 2016, is starting to set an example of how the private sector and a borough can come together for an impressive renaissance.

One of the ways the organization tracks the success it has had revitalizing the business community of Metuchen is the amount of businesses that have opened since its founding — almost 100.

And the borough’s business retention rate is now approaching 90%, Kremer reports. The national average, he pointed out, is about half that.

The partnership between different stakeholders that allowed the borough to come up with a healthy business ecosystem differs from a lot of business groups. It’s a grassroots effort that’s run by Metuchen resident volunteers.

“And I’m really proud of how many businesses volunteer and participate,” Kremer said. “We had 141 volunteers last year that committed a total 5,385 hours of their time. Easily 30 or more are business owners who are actively involved.”

Kremer said the organization hit a $100 million commercial reinvestment mark recently — all money funneled into initiatives and projects that benefit the more than 300 businesses that call the borough home.

“Our goal is to work with them and for them to create best the environment for businesses possible,” Kremer said.

In an effort to make Metuchen more of a regional draw, the borough’s new business group put together some retail promotions to attract shoppers — 52 of them, some of the first in the borough’s history.

It also has worked to enhance the character of the downtown visually. Metuchen Downtown Alliance has a program that provides recommendations on redesigning outdated storefronts and providing grants to businesses to fund facade fixes. It has dished out 17 of these grants, which were paired with private matching investments for more than $200,000 to update storefronts.

“Frankly, in the world of economic development, these may not be eye-popping numbers,” Kremer said. “But in trying to create an environment that helps businesses grow here in Metuchen, this is a big deal.”

Since this partnership came together, Metuchen has nearly doubled the size of its downtown in terms of square footage, going from about 826,000 square feet in May 2016 to around 1.4 million square feet in February of this year.

At the same time, the downtown’s ground-floor vacancy rate has fallen to almost zero, Kremer added. Two years ago, it was 24%. Farther back than that, vacancy abounded.

“The impression that I have of it is that 20 years ago we were pretty close to a low point in terms of major anchors pulling out,” he said. “Metuchen had hit bottom before some visionary planners came together with smart investments.”

Gary Tilbor is the owner of the third-generation, family-owned See-more Appliance Center in Metuchen. He’s one of the longtime staples of the business community in the borough — one of those that were able to make it through the borough’s less-than-ideal era for businesses.

Tilbor’s more optimistic than ever about the borough’s prospects today.

“We’re seeing a lot more traffic than we did years ago,” he said. “There are many people out walking more than ever — coming by, stopping in. … The change is good.”

Metuchen has struggled with a problem common to all transit hubs: How do you turn commuters into potential customers?

The answers have improved, but business owners, such as Tilbor, wouldn’t say the conundrum has been completely figured out.

“I still think we’re missing out on a lot of the train commuters,” he said. “Thousands of people are still arriving at our train station during the week and just walking through the parking lot, straight to their car, not stopping in at main street.”

What the Metuchen Downtown Alliance has been able to accomplish thus far has been the result of a productive collaboration with the borough and its leadership, the original architects of this initiative.

“In a short amount of time they’ve helped bring many people to downtown who would not necessarily otherwise come,” he said. “We’re really proud of that partnership and we hope it continues to thrive in the way that it has.”

It doesn’t sound like the leaders of the borough’s promising partnership would have it any other way.

“We’re going to continue to need to have an organization constantly looking out for bottom line of business and doing everything to encourage them to be successful,” Kremer said.

On the way to the Forum

Those in the “Brainy Borough” are thinking up new ways to attract an audience, and not just for businesses.

The latest push in Metuchen, which earned its nickname for the prominent literary, artistic and musical individuals that resided there, is to develop what Mayor Jonathan Busch calls an arts district in its downtown.

The key in that plan is the proposed redevelopment of the historic Forum Theatre, which the borough has announced plans to purchase.

“Over the years, the performance schedule there has lagged a bit, and there has become significant concern that it will no longer operate as a theater,” Busch said. “We’ve been in support of the possibility of restoring it to its original glory.”

With building inspections and a lot of other hurdles to overcome, the Brainy Borough is still in the beginning stages of this revitalization — one project in a series of developments that could see the borough living up to its name.

“We don’t want to get too far ahead of ourselves, but we expect we could see the closing (of the purchase of) this property in May or June,” Busch said.

Reach Isaac Kremer of the Metuchen Downtown Alliance at: isaac@downtownmetuchen.org or 732-515-9660.