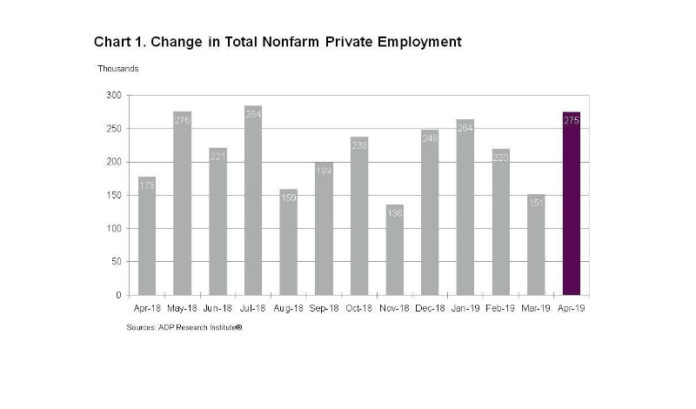 The nation’s private-sector employment figure rose by 275,000 jobs in April, according to the latest report from Roseland-based ADP.

“April posted an uptick in growth after the first quarter appeared to signal a moderation following a strong 2018,” Ahu Yildirmaz, vice president and co-head of the ADP Research Institute, said in a prepared statement. “The bulk of the overall growth is with service providers, adding the strongest gain in more than two years.”

In the services sector, professional and business services companies added 59,000 jobs, while the education/health services industry saw growth of 54,000 jobs, the leisure/hospitality industry added 53,000 positions and health care/social assistance grew by 46,000 jobs. Among the goods-producing industries, construction added 49,000 jobs for the month.

In terms of different-sized companies, medium-sized businesses of 50-499 workers led the way, with 145,000 jobs added, while small businesses of under 50 workers added 77,000 positions and large businesses with 500 or more employees added 53,000 jobs.

“The job market is holding firm, as businesses work hard to fill open positions,” Mark Zandi, chief economist of Moody’s Analytics, said in a statement. “The economic soft patch at the start of the year has not materially impacted hiring. April’s job gains overstate the economy’s strength, but they make the case that expansion continues on.”

The monthly report is derived from ADP payroll data.