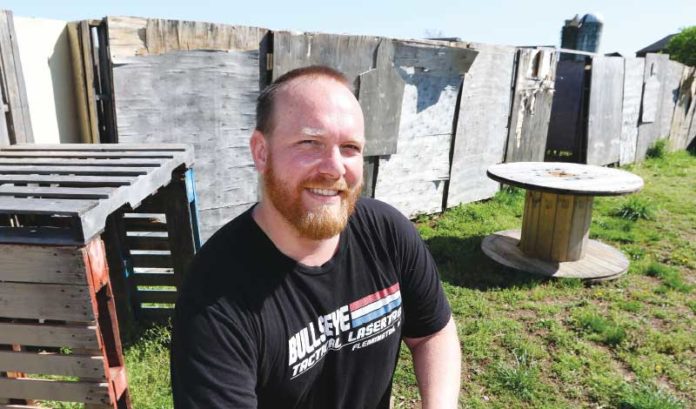 Laser tag was a classic concept in need of a serious update, Vic Pellegrini said.

One he happily provided.

“People think they’ll be running around with plastic vests and space-themed guns inside little corridors with black lights and fog,” he said.

But Pellegrini, the owner of Bullseye Virtual Combat in Flemington, said he makes laser tag feel more like the real-life version of “Fortnite Battle Royale.”

“We bridge the gap between the video games that kids are playing these days and real-life experiences out on the field,” he said. “And when they get here and start playing, they truly understand the concept, how to play and how best to use team work to be successful.”

While nearly 80 percent of business consists of parties for kids ages 8 and up, Pellegrini said Bullseye Virtual Combat effectively elevates laser tag from being a simple kid’s game to one that even large corporations want to use for team building.

Three years ago, Pellegrini was caring for his two young daughters and working part-time as a police dispatcher while his wife attended nursing school.

Then he visited a laser tag facility in New York that used equipment designed and manufactured by iCombat.

“I was unhappy with how they conducted the actual games, but I loved the equipment,” Pellegrini said.

In 2016, Pellegrini raised funds from friends and family in order to lease 10 guns and create his own tactile laser tag concept.

“I thought I could provide what people wanted, which was a more hands-on approach, with captains on the field to help the players, more time to play and more realistic game modes,” he said. “And my wife and I, we thought that if I didn’t try to do this, in five years, we would be watching someone else’s success.”

However, after consulting with expensive engineers and architects as well as various municipalities, Pellegrini said he learned it would cost tens of thousands of dollars to build an indoor field for tactical laser tag.

“Then we went pumpkin picking at Schaefer Farms and thought, hey — they have some unused space that we could both generate revenue from, especially as seasonal businesses,” he said.

Pellegrini said he then consulted with a video game map designer to help create a real-life field using nearly a dozen 4-by-8 sheets of plywood.

“From there, we would learn what worked and what didn’t to continue building,” he said.

Bullseye Virtual Combat was then moved to a larger area to be able to include two 15-by-30 feet rooms — which were leveled by a nor’easter last year.

“But, each time we were challenged, we just went bigger and better with the purchase of more equipment and the availability of more space,” Pellegrini said.

Pellegrini’s persistence has paid off.

Today, Bullseye Virtual Combat at Schaefer Farms is the only outdoor field licensed by iCombat in the world.

“We also do it a little differently than most,” he said. “We combine video gaming and state-of-the-art technology to create a highly immersive outdoor laser tag experience.”

Pellegrini likens the game play to video games such as “Call of Duty” or “Halo,” for example, “where two teams are pitted against each other to achieve an objective, such as most eliminations, most capture points or successfully moving and protecting a VIP,” he said.

Bullseye Virtual Combat currently owns nearly 50 replicas of AR-15 weapons, provided by iCombat, which actually recoil from carbon dioxide-charged magazines and need to be reloaded when a player runs out of ammo.

It provides these alongside wireless headbands, sound effects, music and anywhere between eight and 20 missions during game play, with the option to enjoy classic or custom-made missions.

Game statistics can then be viewed online as well as on the commander screen at the private outdoor field, complete with an 80-by-80-foot complex with hallways, hay bales, tight corners, obstacles and open spaces.

“As far as groups coming out to pay individually, it averages between $30 and $40 per person, depending on the size of the group,” Pellegrini said.

He employs three to be at the field with him during game play from March through October, Pellegrini added, with Bullseye Virtual Combat currently hosting between four and six events each weekend and dedicating other days of the week to field and equipment maintenance, marketing, social media and scheduling.

However, with kids out of school during the summer and parents wanting them to spend more time outside rather than in front of a screen, Pellegrini said he expects the number of weekly events to increase.

“We can open up the field for a private session at any time,” he said.

Pellegrini said he is extremely satisfied with both the number of repeat customers, as well as the business’ email open rate.

“We’ll do a birthday party for one kid over the weekend, for example, and by Monday, we’re receiving phone calls from the other parents,” he said.

“We make missions rather difficult or nearly impossible to complete unless you work as a team,” he said. “There’s no pain or mess, like in paintball. You’re simply burning energy while working together and having fun.”

All of the profits so far have been reinvested into the expansion of the business, Pellegrini said, as he works toward the ultimate goal: an environment in which nearly 100 players can play together on a massive field simultaneously.

“That would be very cool, because nobody else can do that,” he said.

Vic Pellegrini, owner of Bullseye Virtual Combat, is married to a medical professional and is a father to two young daughters.

Because of that — and because of his upbringing — Pellegrini said he is sympathetic toward those who see a lack of gun control, replicating video game violence and the handling of a replica AR-15 by a child as problematic.

“I grew up in a house where we did not touch guns and I completely understand the discomfort people have with real guns,” he said. “But we are a laser tag company.

“I have had discussions with people about guns, but as a business, we tend to push the teamwork, the missions and the objectives of the game, more so than the replica weapons we use.”

Furthermore, all of the terms Bullseye Virtual Combat uses, Pellegrini said, are associated with video games.

“For example, we don’t kill anyone — we eliminate them,” he said. “We are not looking for this to be aggressive; we just want it to be fun.”

“With the look our business has and the photos that we use to promote it, pushback was a given,” he said. “But I was surprised with just how little there was.”

Bullseye Virtual Combat at Schaefer Farms in Flemington recently announced its launch of The Zombie Farm this June.

“Two years ago, we partnered with a company that did Zombie-themed tours on the farm,” Vic Pellegrini, owner, said.

Because it went so well, Bullseye Virtual Combat and Schaefer Farms are now teaming up to provide their own Zombie-themed experience.

“A vehicle transporting both the infectious disease and the cure has crashed on the property, and our players must now fend off the infected while searching for the cure,” Pellegrini said.

The experience will include a scavenger hunt and a trail walk where the “infected” are roaming, he added.

“When our players fire, their headbands will light up and they will collapse,” Pellegrini said. “This will be much different than simply walking through an environment to be scared — now, they’re trying to get you, and you can actually fight back.”