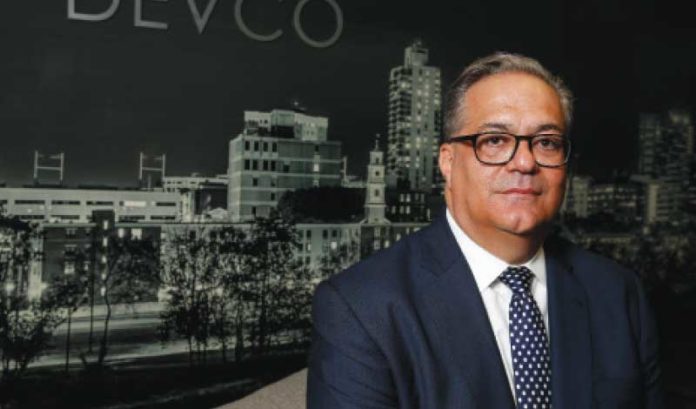 Chris Paladino, the president of New Brunswick Development Corp. and the man universally regarded as the expert when it comes to public-private partnerships, hesitates — just for a second — after a rapid-fire series of questions.

Paladino said he could talk about the 6.3 million square feet of public-private partnership projects that total $1.8 billion in investment that Devco has done over the past 25 years.

He could rattle off the incredible significance these projects have had on economic development — not to mention urban revitalization — during that period.

Or he could talk about the projects he’s walked away from, whether it was because he felt Devco wasn’t needed (often the case) or because the math on the project didn’t work (more often the case).

Instead, Paladino let someone else do the talking — through an anecdote.

Sweeney (D-West Deptford), Paladino said, looked up at the building upon arriving and marveled: “I guess these incentive programs aren’t so bad.”

Paladino laughs at the moment.

While NBPAC benefited from some incentive deals, those were just part of the complicated way the project was put together. And no one knows that better than Paladino.

If he’s learned one thing from all his years doing P3 projects, he said it’s this: “What has become crystal clear is that public-private partnerships are the most misunderstood and misused terms in public policy and real estate.”

At their best, he said, they are game-changers that produce projects that can influence an area for a generation. (As Paladino feels NBPAC will be.)

But not every project should fall under the P3 umbrella.

“People always think: This is something the government should be doing and they’re going to get the private sector to help them do it in the spirit of moving things forward. That’s not the case.

“Where it works best and really what we pursue today is this: There has to be a real good reason for both partners to participate.”

Paladino talked with ROI-NJ about his long history with P3 projects. His responses were edited for clarity and brevity.

ROI-NJ: Let’s start at the beginning. Give us an early project where you saw the power of public-private partnerships?

Chris Paladino: It’s what we call Civic Square in New Brunswick. We now own the buildings that make up the Middlesex County courthouse, the county administration building, the post office, the New Brunswick Police Department, the municipal court and the county prosecutor’s office.

We started the project in 1999, and what was significant about it is that we were able to negotiate with and acquire the largest site, which was the New Brunswick post office. Because we had a relationship with the United States Postal Service, we were able to actually acquire the facility and structure a deal that the government wasn’t able to do. Then we were able to renovate the courthouse and consolidate a variety of governmental uses on that site while converting part of it to housing, using an 80/20 model, meaning 80% was market rate and 20% was affordable.

Everybody benefited: The city got access to the post office site. The county got air rights from the privatized student housing we did. The city got tax revenue from the private housing. And the county was able to wrap the financing of all the public entities into one debt, using their AAA credit rating.

ROI: Civic Square was the first of many projects in New Brunswick in which Devco has been a major player. Some were surprised to see you in Atlantic City on the Gateway Project, which opened last year and features Stockton University and South Jersey Gas as its main tenants. How did you get involved?

CP: Stockton was going to do this on their own, but it failed in its first attempt. We were the perfect partner because we had property that they wanted. We owned 10 acres of prime real estate in the Chelsea section of the city.

Here it was a case where we had property that they wanted. So, even though it was at a time when the university public-private partnership legislation was no longer in place, we were able to do it because we were landowners and we owned the title to the land. So, we made it work. And we made it work because it filled a need.

We took 10 vacant acres and built a campus for Stockton. And we’re about to start the second phase of the campus project. We also brought 200 South Jersey Gas employees to that neighborhood.

Every day, there are now between 2,000 and 3,000 people that weren’t in that neighborhood before. We’ve totally changed the tempo of a neighborhood in a meaningful way in a city that needs 24/7 12-month activity.

CP: We’re doing about 60% of what’s put in front of us. When we don’t do something, it’s because they really don’t have the wherewithal to push the envelope.

I’ve told people: ‘You can do this yourself. I don’t add value to it.’ People need to understand it’s about adding value.

A community in South Jersey wanted us to redo their municipal complex and police station, but nothing more. I said, ‘How can we take this block and stack it so we can put some offices and apartments in, because it will enable you to sell the air rights? And then you can take those air rights and leverage it to lower the cost to the public of the public infrastructure.’

ROI: But New Brunswick does. One of your latest projects was the aforementioned NBPAC. You’ve said this is one of the most complicated — and most rewarding — projects you’ve done. Why?

CP: In simple terms, we took two theaters that were antiquated facilities — George Street Playhouse and the Crossroads Theatre Company — and we built $170 million mixed-use project that also features apartments. It’s another extraordinary example of how public-private partnerships can work.

And we paid for the 60,000 square feet of arts infrastructure without taking on debt. We used an (Economic Redevelopment and Growth incentive) and we split it, with 75% going to residential and 25% to the theater. The mayor allowed us to monetize, using a (redevelopment area bond), the future property taxes from the 207 units of apartments we put into that project. Middlesex County put in $6 million, Rutgers put in $17 million, the New Brunswick Cultural Center put in $10 million. We were able to cobble together $60 million. That’s why there’s no debt.

And we did not give away any naming rights. We told the arts community that they can sell the naming rights and use 80% of it for their endowment while we take 20% of it as a set-aside for the future, when we need to replace the chairs and the carpet and other things.

Then we got Investors Bank to pay 94 cents for the tax credits instead of 90 cents in exchange for a naming rights opportunity. And we worked with our partners with the AFL-CIO and Citibank on the financing of the housing, the New Brunswick Parking Authority, which owns the parking facility, and the city, which owns the dirt it’s built on.

This is a real good example of public-private. This is a true partnership of the not-for-profit sector, the arts organizations, municipal government, the county government and the state university.

ROI: Last question. You mentioned 6.3 million square feet of projects representing nearly $2 billion in investments over the past 25 years. Which project is the most satisfying?

CP: In this business, if you’re not finishing a project, in the ground on another, doing predevelopment on another and trying to imagine another, you’re probably losing momentum. That’s why I’ve always said whatever the project I’m working with at the moment is the most important one I’ve ever done.

I thought the Heldrich Hotel was the most important project we did. We’ve now got about 100,000 people coming to New Brunswick every year to go to that hotel. We took a piece of property that was at one point paying $75,000 property taxes now paying about $1 million. It became a missing link in the city with respect to the George Street corridor; it really kind of cleaned up the block.

Then there was the 1,200-car parking garage with a grocery store on the ground floor that we built with our partner, the New Brunswick Parking Authority. The most important thing we were able to do there was a partnership with the Robert Wood Johnson system to build a fitness and wellness center.

We were able to use a variety of financing programs that allowed us to fill a void because New Brunswick no longer had a YMCA. We were able to provide private health club wellness center memberships that was run by a not-for-profit hospital to New Brunswick residents for half price. And then we were able to, as part of the financing, put every third-grader in a learn-to-swim program as part of their physical education program. We bring them there, they get a swimsuit, they get a towel and they get shower shoes. And every New Brunswick kid for the last five years has learned to swim.

But the College Avenue Redevelopment Program project is probably the most satisfying, particularly since it’s the place where I went to school.

We also were able to build the first academic space on the College Avenue campus since 1960 when we built the academic building. And then, with The Yard, we built something that creates a social magnet for the school. A place where students can congregate, watch TV, hang out — do all of those type of things. The fact that we helped change my alma mater forever is extraordinarily satisfying.

Chris Paladino has found a home on four different ROI Influencers lists, from the inaugural Real Estate list in 2017 to this year’s Power list. Check them out:

Should Alvarez have been hired in first place? Employment lawyer explains...