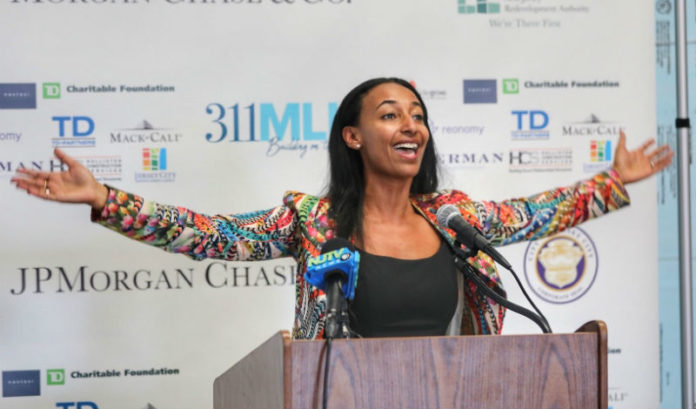 “Since our founding 15 years ago, my co-founder Alex Forrester and I have always envisioned creating a space that would serve as a hub for innovation and growth where our entrepreneurs — most of whom are economically disadvantaged — could gather under one roof to learn, collaborate, create and even live,” Alfa Demmellash, co-founder and CEO of Rising Tide Capital, said. “311 Martin Luther King Blvd. represents the realization of that vision and our commitment to the Greenville section of Jersey City, which has been our home since our founding.

“It is the keystone of the restorative investing model that we’ve spent the last 15 years developing and proving.”

Rising Tide Capital provides business development resources and support for nearly 1,000 local entrepreneurs annually from its current headquarters at 384 Martin Luther King Drive in Jersey City, with a hub in Newark and a replication partnership in the South Side of Chicago.

By relocating to 311 Martin Luther King Blvd. — which marks one of the earliest investments in a newly designated New Jersey Opportunity Zone — Rising Tide Capital can better expand its services to help shape the economic growth of Jersey City with the creation and growth of local sustainable businesses, Demmellash said.

“311 Martin Luther King Blvd. exemplifies the transformative impact of the public sector, the private sector and philanthropic and service organizations coming together to develop neighborhoods,” she said. “This ribbon-cutting is not just a commemoration of a building, but a reimagining of how we build communities and economies that are truly inclusive.

“We are grateful to Gov. Phil Murphy, Lt. Gov. Sheila Oliver, New Jersey Redevelopment Authority President and CEO Leslie Anderson, Mayor Steven Fulop and the city of Jersey City for their partnership in this project.”

Murphy said he is thrilled to see innovation in action at 311 Martin Luther King Blvd. and looks forward to working together toward making great strides across New Jersey’s urban landscape.

Without financing from the Redevelopment Authority, Demmellash said the project — featuring more than 5,000 square feet of commercial space, a courtyard and 10 units of affordable housing — would not have been possible.

Anderson said the Redevelopment Authority is proud to partner with Rising Tide Capital on the transformational redevelopment project.

“We work to mitigate risk and invest our resources in projects that positively impact the quality of life in New Jersey’s urban communities,” she said. “311 Martin Luther King Blvd. embodies our commitment to be there first by investing in communities that need it most.

“This project redevelops an underutilized property to ensure that local entrepreneurs thrive.”

Mortgage, rental assistance grants of up to $2,000 available for Ida victims from N.J. Realtors

Real Estate
Derek Hall -
September 20, 2021
A multifamily complex in Hamburg was refinanced for $31 million, according to Progress Capital. The real estate firm secured the loan for Carlton Village Apartments,...

Mortgage, rental assistance grants of up to $2,000 available for Ida victims from N.J....

Real Estate
ROI-NJ Staff -
September 20, 2021
New Jersey Realtors announced Monday that it is making a limited number of grants of up to $2,000 to residents impacted by Hurricane Ida. New...

Food & Hospitality
Derek Hall -
September 20, 2021
PrimoHoagies, the sandwich chain based in Westville, is expanding nationwide, with 18 new franchises in four states, the company said in a news release. The...

How N.J. businesses need to be inclusive in their online outreach, specifically for people...

Op-Ed
Brittany Liscoe, Easterseals NJ -
September 20, 2021
Why your online outreach is lacking by over 30% Gone are the days of word of mouth and traditional advertising. The internet is king, and...