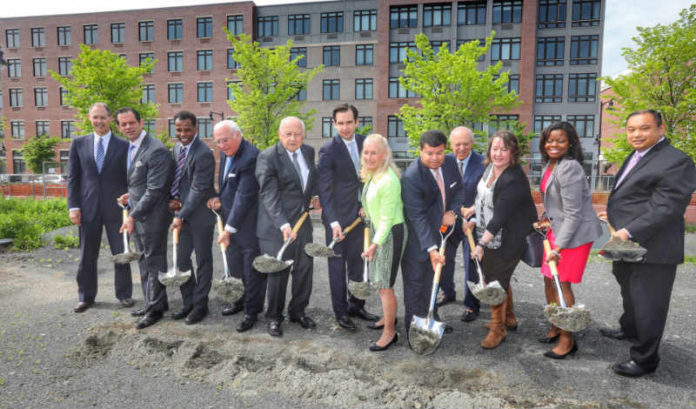 They brought 10 shovels to the ceremonial groundbreaking.

They didn’t have enough.

Generations ago, that may have led to a cliché joke about Hudson County. Wednesday morning, on the West Side of Jersey City, it represented just how many officials from top companies, as well as higher education and governmental agencies, are working together to start the second phase of the transformational University Place project.

This groundbreaking was for the start of Rivet 2, which will feature 199 residential units and approximately 10,000 feet of service-oriented ground retail.

The unit follows the success of Rivet 1, a 163-unit luxury apartment building that opened last summer and already is more than 80 percent full.

The two buildings are part of a master plan that calls for an eight-building live-work-play (and learn) destination that will feature more than 1,000 residential units, 120,000 square feet of retail, a state-of-the-art performing arts center (which will house the Joffrey Ballet School — coming over from New York City), cafes, three upscale restaurants and plenty of green space.

For Sue Henderson, president of New Jersey City University, it is a perfect marriage of public and private interests.

“This is bringing together a real live, work and play space with a higher education and an arts component,” she told ROI-NJ. “That’s why we are calling it University Place. It is going to be a place to be — a place where the city can grow.

“As an anchor institution, you are supposed to be reaching out to your community and being part of the city. You want to be in and of your city.”

“When you think about the transformation that’s taking place on the West Side, we’re lucky to have NJCU as an anchor,” he said. “They are very proactive, thinking about development, and we want to be partners with them.”

Many others do, as well.

The development partners were led by Hampshire Cos. (Jon and Jimmy Hanson), Claremont Cos. (Richard Sciaretta) and Circle Squared Alternative Investments (Jeffrey Sica).

They see the potential, too.

“The successful leasing of Rivet 1’s retail and residential components is a strong indicator that our vision for Jersey City’s west end is shared by residents and businesses alike,” Sciaretta said.

Rafael Perez, chair of the NJCU board of trustees, thanked them, and all of the other contributors, including Freeholder Bill O’Dea and Strategic Development Group CEO Tony Bastardi.

“The university is not equipped to do this (by ourselves),” he said. “This is a partnership.

“It’s gratifying being here today — after many years — knowing what it takes to make these projects come to fruition.”

Fulop, who thanked Ward A Councilperson Denise Ridley and Ward B Councilperson Mira Prinz-Arey, along with Council President Rolando Lavarro, said the day’s event marked another day forward in the town.

Fulop, in fact, already was looking forward to future groundbreakings, including ones for Bayfront, the transformative 100-acre project one block over that is gearing up to start.

“If you think about what this place is going to look like five years from now, it’s going to be entirely different,” he said. “The RFP for the first four buildings of Bayfront should go out later this month.”

Together, he said, they will have great impact — and symbolism.

“I think the two will really complement each other,” he said. “The fact that the first Rivet is ahead of schedule is only going to serve us on Bayfront. For the people who are skeptical about whether the market can support it, or people want to be here, Rivet is a testament to a fact that it’s ‘Yes.’

“This is becoming just another Jersey City community that is changing.”