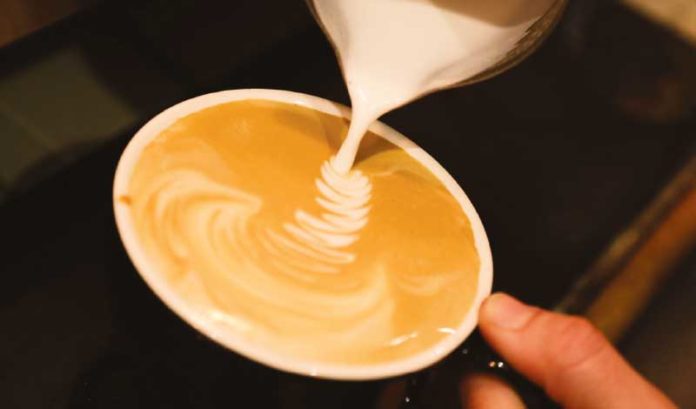 For nearly two decades, Jodie Dawson worked as a clinical psychologist and certified life coach, while Kristine-Ellis Petrik worked as a journalist and marketing executive with CNN.

“But it turned out we were really good at roasting coffee — even though it’s certainly very different than I expected it to be,” Petrik said.

What started as a part-time passion project in the Sullivan Catskills of New York nearly eight years ago has become a $1.5 million women-owned business in the greater Montclair area, where Dawson and Petrik, co-owners of Java Love Coffee Roasting Co., and their kids live.

“Entrepreneurship is sort of like motherhood,” Dawson, the president, said. “You don’t know how hard it’s going to be until you are in it, but when you are successful and launching out into this world, there is no greater reward.”

Now, with two retail locations in Montclair and a third in White Lake, New York, Petrik, the head roaster, said she and Dawson currently are devising plans to keep growing.

“We’re going to keep moving forward until we can’t anymore,” she said.

It began when Petrik said she and Dawson had a tough time staying caffeinated at their second home in upstate New York.

“There were great restaurants and amazing organic farms, but every time we asked somebody where we could get a good cup of coffee, (they) said Citgo — the gas station down the road,” Petrik said. “We thought that was so ridiculous.”

In response, Petrik said she and Dawson developed an idea to open a French market of sorts, which would work with local farmers and artisans to sell produce and other products.

“It was a very romantic notion of owning our own business,” Dawson said. “But we also wanted to be a part of the economic development of the county.”

Petrik said she and Dawson became “accidental entrepreneurs” in an entirely unfamiliar industry after connecting with Hudson Valley Coffee Roasters, an existing artisanal coffee roasting company nearby with less than $25,000 in annual sales.

“We were trying to sell their product, but they said they were no longer accepting customers, as they were looking to sell their business,” Petrik said. “That’s when a couple of friends of ours who were financial and restaurant consultants said, ‘Buy it.’”

Petrik said she and Dawson initially were skeptical, seeing as costs in the coffee industry were at a record-high.

“But they said, ‘If you’re going to do something, do one thing and do it well,’” Petrik said. “And that made sense to us.”

Petrik and Dawson purchased Hudson Valley Coffee Roasters and wrote into their contract how they both were to be trained by the company, Petrik said.

It took three months, she added, but in 2011, she and Dawson moved the business to Bethel, New York, to open their first Java Love Coffee Roasting Co. in a 400-square-foot space with a roaster and a tiny counter.

And that was just the beginning.

Java Love Coffee Roasting Co. would relocate its flagship location to a larger space in White Lake, before opening in Upper Montclair in 2014, in downtown Montclair in 2016, and creating an additional outpost in Roscoe, New York, in 2017.

The small batch, artisan coffee roasting company remains competitive with both nearby Dunkin Donuts and Starbucks locations, Dawson said, due to its commitment to consistent quality product, economic development, education and sustainable practices, including the use of organic, sustainably-farmed, fair trade- and rainforest alliance-certified beans.

“The milk we use is from a local dairy farmer, for example,” Petrik said. “A local artisan created our pottery. And, when we source from local bakeries, we know it’s quality product.

“We work so hard on our coffee — why would we not have everything else match that level of quality and commitment to being fresh, good and nutritious?”

A customer can come in and order a cup of drip coffee for $2, Dawson said, or spend more on a creative oat lavender latte from Java Love Coffee Roasting Co.’s specialty drink offerings.

“We also run specials that highlight sustainable practices that are win-win for pricing and the environment,” Dawson said. “For example, you can bring in a travel mug and get any beverage for the price of a small coffee, or, if you bring in a small jar, we will fill it with a whole pound of coffee beans for the same price as a 12-ounce bag.

“We are passing on the packaging savings to our customers while also promoting reusables.”

Petrik, also a trained sommelier, said that, as a recovering journalist, it is her job to help tell the story of the coffee, to both the customers ordering it and those seeking further education from courses such as “Seed to Cup: Coffee 101,” a class offered by Java Love Coffee Roasting Co. on the various growing regions, flavors and characteristics of coffee.

And its special reserve coffees, with unique characteristics, are limited in availability, Petrik said.

“We had an outrageous Ethiopian Yirgacheffe, for example, that had blueberry tones to it,” she said. “This fruity coffee was from the highest elevated farm in Ethiopia, and, the higher the elevation, the better the quality of coffee.

“We were lucky enough to get one bag of it, 132 pounds, which means we got about 120 pounds roasted out of that. And it did not last on the shelves.”

“There are four bold coffee beans that, when blended, become mellow enough to not require milk to drink,” Petrik said.

A positive customer experience always is the end goal, she added.

“I also train the staff on all of our different coffees so that our message, our story and our knowledge is the same across the board,” Petrik said. “All are welcome to learn here.”

Its e-commerce site and monthly subscription service, which delivers two 12-ounce bags of freshly roasted beans to one’s home for $32, accounts for more than 50 percent of online sales.

And Dawson said the business has even invested in highly lucrative mobile coffee cart catering, which provides baristas and all the equipment necessary to serve espresso-based drinks like lattes and cappuccinos off-site.

“We were getting a lot of inquiries for events and catering, but none of our set-ups really worked for that,” she said. “So, we had some extra espresso equipment, Kristine built a rustic cart — and now we have two carts and are working the party circuit from weddings to mitzvahs.”

The next year will be focused on finding a new location more central to Montclair for its roaster, Petrik said.

“Plus, we always are looking at the possibility of opening another Java Love,” she said. “But I have no idea what that looks like — yet. When we see it, we’ll know, and we’ll step into it.”

Dawson said she’s all in.

“You only get one shot at this lifetime and, as our 12-year old daughter said to me the other day, ‘You aren’t going to get anywhere by playing it safe,’” she said.

Wherever they go, however, Petrik said there must absolutely be a commitment to — and also buy in from — the community.

“We know we would not be where we are today if it were not for the communities that support Java Love and our mission,” Dawson said. “Our gratitude, I think, comes through in everything we do, from the local products we source, to the commitment we have to our staff, to the donations and engagement we have with our local communities.

“It has to be a two-way street and we love creating community around a great cup of coffee!” 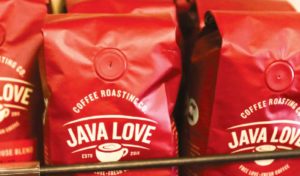 Coffee is the second most heavily traded commodity in the world, outside of oil, according to Kristine-Ellis Petrik, co-owner of Java Love Coffee Roasting Co.

“But unlike oil, coffee is seasonal,” Petrik said. “You can’t buy Sumatra coffee year-round, for example, because it’s only harvested in the fall. So, we have to buy enough coffee to last us the year, and every year is different.”

Everything from the weather to politics can affect industry prices, she added.

“If a tsunami is headed toward Indonesia, we’re watching that, because we know that if flowers are blooming on the coffee trees, the rain and wind will lower the crop and our price will be higher,” Petrik said. “Also, if we’re in a trade war with China, for example, are there products that are being impacted by that?

“Because China is one of the largest coffee consuming countries in the world.”

But what Jodie Dawson, co-owner and president, said she thought would be a no-brainer transition from psychology to the management of her own business was actually difficult.

“It turns out that, because of the emotional and financial stake we had in our business, all of my skills were thrown out the window at first,” she said. “It has taken several years of experience and research to get back to integrating those skills with my staff and our hiring and review process.”

Members of the younger generations, for example, take jobs with causes greater than themselves — but only those that fit well with their lifestyles, Dawson said.

Furthermore, Dawson said she must hire people who will be best for the business while also providing them with the life and work skills needed to one day allow them to leave and prosper elsewhere.

“We’ve learned a lot about the type of employee who works best with our company,” she said. “It’s someone who is open to learning and growing as an individual and who supports our mission as a women-owned business focused on great coffee, high customer service standards, community and sustainability.

“Skills can be trained, but a great fit cannot.”