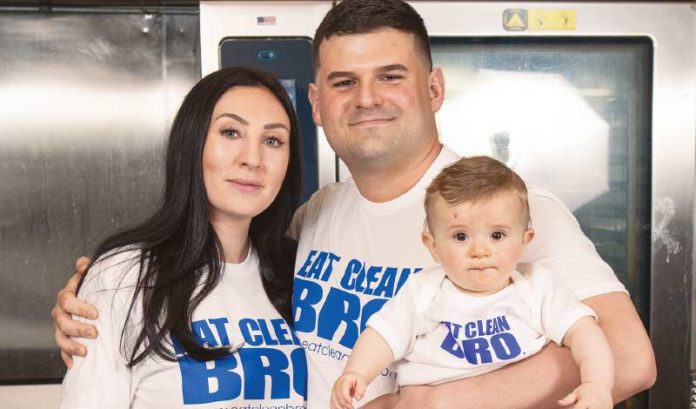 Jamie Giovinazzo said his first goal was to be “shredded.”

“When I was younger, I was heavy and picked on and I really hated it,” he said.

After he did that, he used what he had learned in the kitchen and the gym to become a food business owner at the age of 19.

“As crazy as it sounds, there was nowhere you could go in 2013 to order healthy prepared meals without being part of a (strict) program with weekly or monthly contracts,” Giovinazzo, now 32, said. “I was one of the first ones to say, you know what? Here’s this healthy food I make, here’s my best price, order whatever you want, whenever you want — and that became my point of differentiation in the market.

“That is what allowed this company to take off.”

The company — now a family business with his wife, Kayla Giovinazzo, 28 — is on track to do $15 million in sales this year.

“It’s just so Jersey, the way this all went down,” Jamie Giovinazzo, the founder and president, said.

Giovinazzo said he learned so much in his own bodybuilding journey that he became a personal trainer at the age of 18.

“I also learned a lot at the gym from other trainers who were competing in bodybuilding about how to cook, what to use and what not to, and I just always put my own creative spin on it,” he said. “Cooking always has made sense to me. It’s one of those things I learn fast and remember well.”

In 2005, a stranger at the gym asked Giovinazzo if he would be willing to prepare and cook whatever he ate for him, too.

Before long, Giovinazzo had taken over his family’s kitchen — which proved unsustainable, he said.

“I went in and out of business several times over the next few years,” he said. “Finally, I gave up. I didn’t think I could do it.”

But while he was trying out other means of employment, Hurricane Sandy hit. With his childhood home destroyed and his family devasted by the storm, Giovinazzo said he made a New Year’s resolution.

“No matter what, I said to myself, I would figure it out and make something happen, so, in the event of another crisis, I would be able to help my family financially,” he said.

One month later, Giovinazzo said he received a call from that first customer.

Giovinazzo said he took his last $300 from bartending to create meals for more than 80 customers that week.

Right into a commercial kitchen — and a new business venture with his now-wife, Kayla, despite Giovinazzo calling to cancel one of their first dates.

“He said, ‘I can’t go out because I have to get my finances in order for the accountant,’” Kayla Giovinazzo said. “But I said, I love organizing — I’d love to help.”

Kayla Giovinazzo said she showed up to Jamie and a garbage bag full of receipts.

“So, I said, OK, dump this out and let’s get going,” she said. “That night, we enrolled in QuickBooks and got it all sorted out.”

The idea behind the company is that it helps its customers calculate their macros and keep it “clean” by cooking and delivering healthy meals for them.

“There are more than 100 options on the menu and it is not really specific to any one diet,” Kayla Giovinazzo said.

For example, one can order vegetarian roasted spaghetti squash and cauliflower alfredo ($10.49), the low-carbohydrate and low-calorie Italian chicken sausage with peppers and onions ($8.50) or even Keto-friendly buffalo bleu chicken meatballs ($11.49).

“We did release a Keto-friendly menu that people have really liked,” Jamie Giovinazzo said. “I myself tested it for 90 days and lost 40 pounds.”

“Whatever it is you might need or be into, we have it — without a plan, without a subscription, without recurring billing and without signing up for anything — you simply can put together what is best for you on our website and check out,” she said.

Their customer base is diverse.

Kayla Giovinazzo said many of them live in New Jersey and New York, including models with “shredded” bodies, such as Remington Perregaux; radio and television personalities looking to get healthier, such as Greg T and Skeery Jones from Z100; Alani Nicole “La La” Anthony in Brooklyn; and some professional athletes, including members of the New York Knicks.

“But according to our Facebook following, aside from New Jersey and New York City, Atlanta, Georgia, has the next biggest pull,” Jamie Giovinazzo said.

Eat Clean Bro therefore opened a second kitchen in Atlanta in February in partnership with Justin Lynch, who Jamie Giovinazzo said he grew up with in Old Bridge.

“Justin’s family got into the restaurant business and therefore he was godfathered into the business, too,” Jamie Giovinazzo said. “He’s now got five restaurants in Atlanta and he recently reached out and said he’s been watching our success on Facebook and wanted to work with us. So, we opened it the way someone would open a restaurant. I sent my chefs down there and they sent their chefs up here for training and we got it off the ground.”

Jamie Giovinazzo said the experiment was in preparation of exploring franchise opportunities over the next couple of years.

“Being that Justin is my friend, I’m confident in his ability to replicate my brand out there and fulfill the orders the right way,” he said. “This was a friendly way to see and learn what really goes into it.”

Jamie Giovinazzo said he and his family have invested so much into this company already.

“But I’m hoping to now raise some capital to build out a Eat Clean Bro store, in the way I might see a franchise model laying out,” he said.

Within three to four years, Jamie Giovinazzo said, he would like to see the business reach $50 million in sales.

Having been all self-funded, Kayla Giovinazzo said, it is crazy to think they already are at this point.

However, as working parents to a 6-month-old son, she said their motivations are even stronger to succeed.

Stuck in the middle

Jamie Giovinazzo said while the low entry to barrier was great for him when he started in this industry at the age of 19, it has since become a challenge for Eat Clean Bro.

“When I started cooking out of my friend’s house in 2013, it wasn’t common to use social media platforms,” he said. “I was just making meals for friends and family and had no means of advertising. Now, with Instagram and Facebook, it’s anybody’s game – even some kid in a backyard with a grill, who can sell meals for half of what we do because he has no overhead.”

Jamie Giovinazzo said that’s just one end of the spectrum.

“Bigger companies and national brands who are backed by deep pockets get these huge cash infusions that afford them the opportunity to give out $80 coupons,” he said.

“So, we are fighting a war on both fronts, with both the small guys with low overhead, and the big guys who can afford to operate at a loss of more than $100 million per year.”

Jamie Giovinazzo said it was his father who came up with the name for Eat Clean Bro.

“He said, ‘That’s all you say — why don’t you just call it that?’” he said. “So, yes, that is the way I talk. I am who I am, and I have to stay true to that. I’m not0 cut from the corporate cloth and I am not your typical businessman.”

Kayla Giovinazzo said that is why the name will never change.

“We love it,” she said. “Even though from a marketing standpoint, people will tilt their heads and think, how are they even marketing to women, for example?

“But our biggest market right now is women between the ages of 30 and 35, especially women with children.”

N.J. sportsbooks set another record, just short of $1B betting milestone in December

Keep up appearances: Sperling Dermatology had dark days when pandemic hit, but renewed interest fueled its best 6-month stretch ever