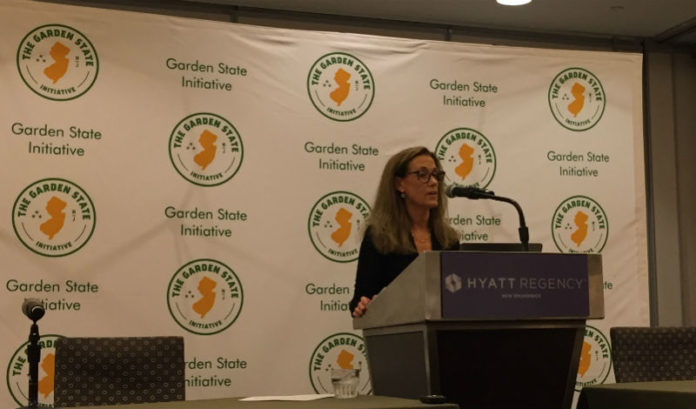 State Sen. Declan O’Scanlon was measured in his tone but precise in his words.

Speaking at Garden State Initiative’s second annual Economic Policy Forum on Thursday in New Brunswick, O’Scanlon (R-Holmdel) put the shortcomings of the state’s economy on the actions of government officials.

“The worst thing a state can do — which is the playbook New Jersey seems to follow at times — is to go out and act as if you actually care about what businesses say and what they need, and then do the exact opposite,” he said. “We’ve done that for a long time.”

O’Scanlon, who has served in the Legislature since 2008, said growing the economy is a numbers game — and one the state currently is losing.

“The rhetoric that comes out of the front office ignores mathematics,” he said. “There is a limit to how much we can increase the cost on the people who create the jobs here until they go away. And they’ve already started to go away.

“It’s a thing that we deny: Our tax policy and our regulation policies have a real impact on what people do.”

The forum was marked by what GSI President Regina Egea said would be a frank discussion on the state of the New Jersey economy.

And while the panels had a tilt toward the Republican side, Senate President Steve Sweeney (D-West Deptford) shared his views as well — and also called for a reduction in taxes and regulations, while promoting his Path to Progress.

“The Path to Progress was a very bipartisan, deep look into New Jersey,” Sweeney said. “And what it looks like isn’t good. And, if we don’t change the direction we are going in, there’s not going to be anybody left in this state.

Or even more, prevent companies from coming here, Sweeney said.

“Amazon is the perfect example,” he said. “We offered Amazon $7 billion. And they chose New York. It’s the same labor market. They were willing to take billions of dollars less not to come to New Jersey because the picture of the state’s health is not a good one.”

The difficulty of doing business can be measured in many ways.

Paul Harencak, vice president of LPS Industries in Moonachie, held up the amount of paperwork needed for a company to register a business in New Jersey on the state’s website: It’s 58 pages long.

“Now, if I’m an entrepreneur and I want to move my business and come to the East Coast, I got to really think about this,” he said. “We think we really look at, ‘Are we attracting business?’ Even from our website. It’s not pretty, and I think we can do a better job.”

The speakers echoed one of the themes of the event. And, according to Egea, GSI’s goal.

“We are committed to not shy away from uncomfortable truths about the state,” she told the crowd.

Egea highlighted three of her own:

“New Jersey ranks in the lower quartile of nearly every independent evaluation of desirability of a state,” she said. “Areas like cost of living for individuals, cost to operate a business, best places to start a business and, of course, our total tax burden, including property taxes, as a percentage of income.”

Egea echoed the sentiments of her panelists.

“There’s an undercurrent of dissatisfaction in the public in New Jersey, and political leaders who ignore that do that at their own peril,” she said. “Benign cocktail chatter is turning into complete dissatisfaction and impatience by the voters and the members of the public.”