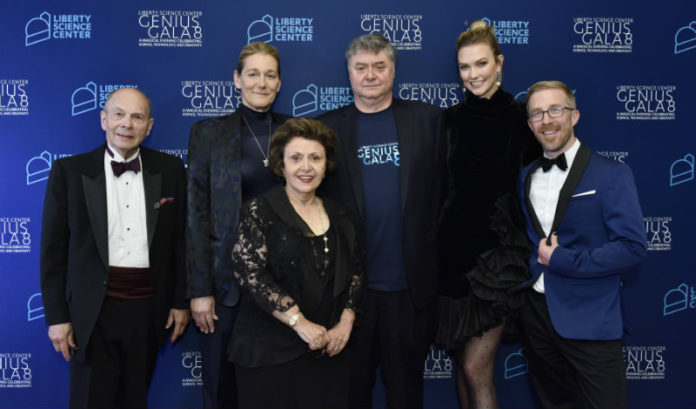 There were Genius Awards for the longtime couple who have made it their life’s work to study dyslexia and another for the woman who pioneered research into the cloning of animals for human transplant while pushing the ethical boundaries of using nano- and cybernetic technology to extend human life.

There was even a Genius Award for the inventor of the #hashtag.

But Genius Gala 8, the annual event that draws record crowds and donations for the Liberty Science Center in Jersey City, also showed the impact LSC is having on the state’s desire to use science and technology to pave the way for a better future.

“Since last year, LSC attendance has grown another 50,000, to more than 750,000,” he told the crowd — a who’s who of the state’s top elected officials and business leaders. “Our attendance has risen by 65 percent over five years, making it the fastest-growing museum in the U.S.  Not just science center, but museum of any kind.”

Hoffman said he is most proud of the fact the center has the most classrooms of any science center in the country — and is led by 38 instructors.

Those teachers worked with more than 250,000 K-12 students last year, including nearly 100,000 who come from communities that are the most underrepresented in STEM fields.

Hoffman said the future is bright, with the first phase of SciTech Scity expected to open in 2022.

“SciTech Scity is a 30-acre minisociety of innovators and companies who believe in the power of science to create a better future for all,” he said. “More than 100 science and technology companies will be based in SciTech Scity, as well as a science-focused K-12 school.”

Hoffman’s efforts were lauded by Gov. Phil Murphy, who has made reclaiming the state as a center for innovation one of the primary themes of his administration.

“We are in so many respects the state of innovation,” he said. “In Gov. Tom Kean’s time, there was no other state that could touch us.

“We let a little of that rust, but the good news is, overwhelmingly, we are back. New Jersey is again being seen as the state of innovation.

“We have many jewels in our crown, but there is no jewel that shines more brightly than the Liberty Science Center. When you look at what’s here today, when you hear about what Paul talked about in terms of expansion and, in particular, when you really understand what SciTech Scity will mean to not just Jersey city and Hudson County, but the state, it is an extraordinary institution.”

Of course, the night was about the Genius honorees, too.

“I remember after our first Genius gala, one of my most respected board members came to me a little bit concerned,” he said. “She loved the event, but she was concerned that by labeling it a Genius Gala, we were running the risk of not being able to live up to the name.

“Seven years later, we are still here. And our greatest challenge, thankfully, is narrowing the field down to 3-4 honorees every year. It’s a great problem to have.”

Chris Messina: He has worked at some of the top disruptive technology companies of the era and is an often-quoted expert on the influence of social media and technology on society. But, more than anything, he is known as the creator of the #hashtag.

“It’s hard to imagine back in 2007, when social media was just getting started, that we would unite most of the planet, in a joint conversation,” he said. “And, secondly, that we would have a number of platforms, that would represent over 2 billion people in coming together in having a shared collective conversation.”

Sally Shaywitz and Bennett Shaywitz: Lab partners for 35 years and marriage partners for 55, the couple are the world’s experts on dyslexia. They have discovered dyslexia’s scientific basis, pioneered effective strategies and changed public attitudes. And, for more than three decades, they have been studying 455 people with dyslexia, starting when they were at the age of 5.

“Our deep hope is that each of you here this evening will come to understand dyslexia — and help to remove the stigma of dyslexia,” Bennett Shaywitz said. “And know that, with dyslexia, you possess an extraordinary set of strengths in higher-level thinking, reasoning, thinking out of the box and problem solving.”

Sally Shaywitz added: “If you or your child is dyslexic, make sure they know that they’re smart and have higher-level strengths. And as they go through life, they are defined by their strengths, and not their slow reading or poor spelling.”

Martine Rothblatt: A pioneer of satellite communications (she’s credited with creating satellite radio), she turned to biotechnology when her 5-year-old daughter was diagnosed with a then-fatal disease. She worked to find a cure and has since devoted her life to the idea of combining technology and biology so people can defy disease and even death.

“We live in the point of time for the first time, the most magical thing discovered in the universe, DNA, a self-replicating code, is at the cusp of being unfolded,” she said. “We think, in the future, that the fastest computers will, in fact, be biological computers. We’re at the cusp of biology becoming technology.”

In addition, a Strides in STEM award was given out for the first time.

Karlie Kloss: Perhaps better known as a supermodel, Kloss launched Kode With Klossy, a nonprofit focused on creating learning experiences in STEM and coding for young women, especially those in underserved communities.

“Growing up, I loved science, but I never had computer science, coding and engineering classes,” she said. “Years later, I took a boot camp and learned how to code and I really realized how valuable that skill set is.”