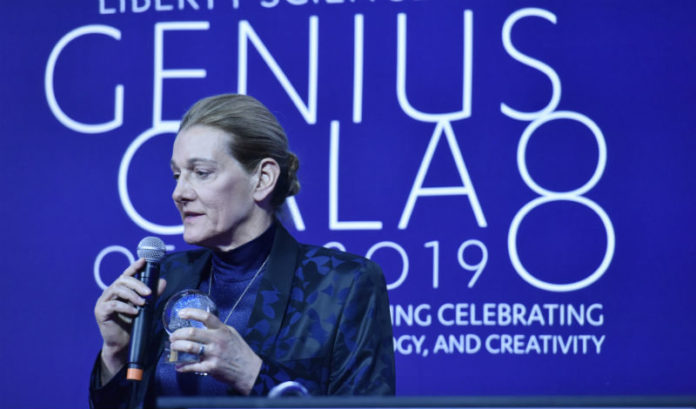 Martine Rothblatt already is credited with founding satellite radio, discovering a cure for a little-known disease that was expected to take the life of one of her young daughters, becoming a pioneer of pig cloning with the goal of achieving lung transplants the human body will not reject — and preaching a call for a transhumanist lifetsyle, one which endorses the ethical merging of human beings and technology so humans can defy disease and death.

But, as Rothblatt took the stage at Genius Gala 8 on Monday night at Liberty Science Center in Jersey City, the founder, chair and CEO of United Therapeutics — someone who is the highest-paid pharmaceutical CEO, highest-paid female CEO and highest-paid transgender CEO — said she is only looking to the future.

A future, she described, as the most promising in the history of the planet.

“We live in the absolute best time there has ever been for humanity or even for an antecedent species to humanity,” she told the overflow crowd. “Never has a smaller percentage of people suffered from violent conflict and never have greater numbers of people lived fulfilling, happy, healthy lives. Never has there been more wonderful frontiers of science and technology to explore.

“We live in the point of time for the first time, the most magical thing discovered in the universe, DNA, a self-replicating code, is at the cusp of being unfolded. We think, in the future, that the fastest computers will, in fact, be biological computers. We’re at the cusp of biology becoming technology.

“We’re at the cusp of finding not thousands, not millions, but more planets in space than there are stars in space. This is the most awesome, greatest time to ever be alive. And I think we should just shout, ‘We can do it,’ from the rafters.”

Her positive outlook has served her well throughout her life. Perhaps no greater than when her 5-year-old daughter, Jenesis, was diagnosed with pulmonary arterial hypertension.

Rothblatt and her wife, Bina Rothblatt, not only found a cure for the disease, they used it as the start of United Therapeutics, a company that features four drugs for pulmonary arterial hypertension and one for neuroblastoma.

The secret to finding these cures and making such life-altering discoveries, is simple, Rothblatt said.

“Tough problems always embed or encode the solution for themselves, but they’re bundled up together in lots of smaller problems,” she said. “So, when I’m faced with a challenging problem, I try to see, how is there a sequence of smaller properties to solve, each one of which will bring me a bit closer to the ultimate solution? And, when you get to the ultimate solution, the problem is in fact solved.

“When you see a tough, difficult problem, try to study it until you can see it as a sequence of logical solvable problems.”

Rothblatt’s next quest may be for eternal life. She is an advocate of employing nano and cybernetic technology to extend human life. In fact, she had engineers build a robot called Bina48 — a likeness of her wife at age 48 — that already has shown the ability to answer questions.

Her optimism abounds. And, she said, the only thing she worries about is the pessimism of others.

“I think that with the proper attitude, anything can be accomplished,” she said before noting the video that was played before she earned her Genius Award.

“The video was very kind of pointing out that challenge with our daughter’s illness. My loving partner, Bina, and I were able to marshal together everything that was needed to come up with a medicine that keeps her and thousands of other people alive and healthy. That was because we had an attitude that we can do this.

“And, to me, everything about this Liberty Science Center says, ‘We can do this.’ You honor all the people who have made great discoveries.

“So, the thing that I worry about is when I see pessimism and negativity seeping into the culture. I think we need to double down on places like LSC and speak out loudly about positivism and optimism.”