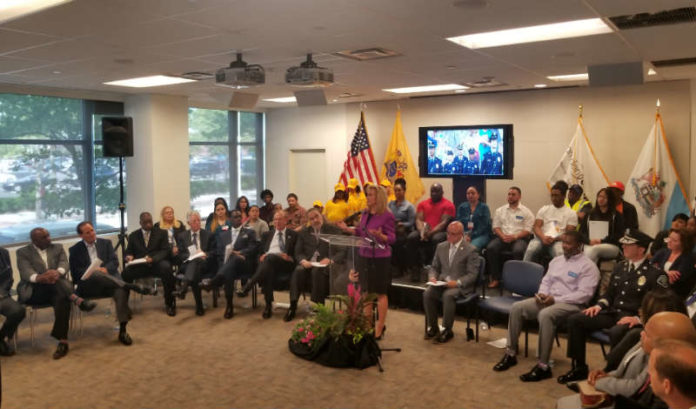 An event to highlight the benefits of tax incentives in Camden, and how they have helped companies move or expand in the city, took place Thursday afternoon in the James Florio Center for Public Service on the campus of Rutgers University-Camden.

American Water CEO Susan Story told the audience of about 50 that the company is all-in for Camden.

That includes moving what she called the “largest concentration” of the company’s 7,100 employees to Camden, as well as investing $6.2 million in the city since 2010.

Story also highlighted the hiring of several diverse vendors from the city.

“We’re nationally very strong in diverse suppliers,” Story said. “We had 20 small businesses from Camden … who came, because we educate them and teach them how they can compete and how we can prequalify them.”

Incentives that were given to businesses that came to Camden have come under attack recently. While officials in Gov. Phil Murphy’s administration repeatedly have said they are not against Camden companies receiving incentives from the state Economic Development Authority — but want to investigate the process in which they received them — businesses that did receive them increasingly have been touting the benefits.

“Look at the businesses that are here and that are coming here,” she said. “Then you can magnify what business at its best can be.”

Camden Mayor Frank Moran reiterated the history of the city’s economic development, pointing to the more than 850 residents employed by companies who have committed to Camden, and the 400 local construction workers.

The event was attended by local residents employed by some of the major employers in the city, including American Water and Cooper University Health Care.

While the event was initially billed as one that would have several former governors in attendance, only Jim Florio and Jon Corzine attended, as well as former state Sen. Ray Lesniak.

Corzine said that, while there was a lot to celebrate about the turnaround story of Camden, there is still more work to be done.

“This is a journey, not an end; this is not a celebration across the finish line, it’s a work in progress,” Corzine said.

“We are competing with other states and countries for business development,” he said. “Tax incentives have helped level the playing field and make New Jersey competitive for jobs and tax revenues.”