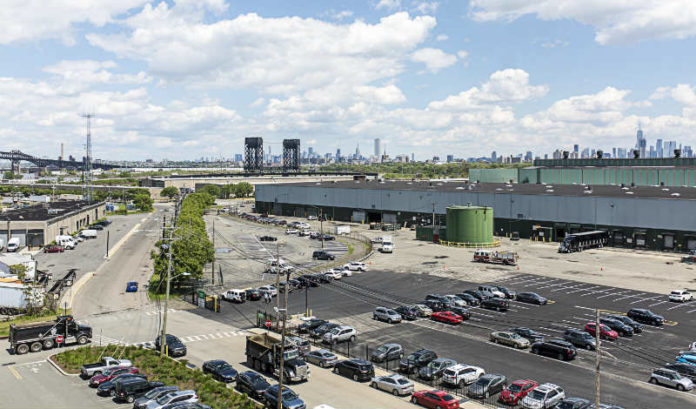 The town of Kearny has received a $3 million federal grant from the U.S. Economic Development Administration’s Public Works program to redevelop and improve Hackensack Avenue into a high performing “green” street, seeing as the stretch of roadway serves as the primary entranceway to Kearny Point, a collection of more than 3 million anticipated square feet of coworking and flexible-use office space on 130 acres in South Kearny.

“To say that I am impressed with the local vision and the collaboration taking place here would be an understatement,” John Fleming, U.S. assistant secretary of commerce for economic development, said Thursday on site at Kearny Point. “Through your efforts, this land is being reborn as a center for the pioneering companies of the new economy, providing a flexible, modern workplace and home to a diverse community of today’s creators.”

The EDA’s investment also will be matched by $1.3 million in local funds, Fleming added.

“This is the type of true public-private partnership that the U.S. Department of Commerce and the Economic Development Administration is eager to invest in,” he said.

Fleming attributed the success of one of the largest adaptive reuse projects in the country to Wendy Kelman Neu, chairman and CEO of New York City-based Hugo Neu Corp., with the ongoing redevelopment representing an expected $1 billion in public and private investment into the site over the next decade.

Hugo Neu Corp., a recognized global leader in recycling, is the owner and redeveloper of Kearny Point.

“It is through your commitment and wisdom that this former maritime facility is being transformed into a cutting-edge, world-class innovation district and manufacturing hub,” Fleming said.

Neu said the announcement Thursday marked the celebration of an incredible milestone not only for Kearny Point but also for the long-term economic development goals of Kearny, as the funding goes toward a Tax Cuts and Jobs Act-designated Opportunity Zone.

“We would not be here today without the hard work of the many stakeholders that understand that in addressing the infrastructural needs to support growing businesses at Kearny Point, we can take critical and meaningful steps to protect and enhance our natural environment,” she said.

“The modernization of Hackensack Avenue will not only safeguard the area from future storm-related flooding, but will strengthen pedestrian and biker safety and lay the foundation for the economic revitalization and improved quality of life that this community deserves,” Booker said in a statement.

According to Mike Meyer, director of development at Hugo Neu Corp., the redevelopment of the roadway will include the planting of more than 20,000 square feet of grass, plants and trees; the creation of designated paths for both pedestrians and cyclists; new street light poles; and the implementation and improvement of overhead electric services and underground gas distribution system piping.

Designed by Bohler Engineering and Arterial Design Studio, the project also will reduce flooding and limit nonpoint pollution of the Hudson-Raritan watershed by rebuilding the roadway’s underground water distribution, stormwater and sewer systems.

Kearny Mayor Alberto Santos said the roadway improvements, which are expected to be completed within a year and a half, are just the beginning.

“We will be submitting more applications and we will be able to show you results,” Santos said. “Bringing old industrial centers back to life to create more jobs should be our collective goal irrespective of state or party.

“We should be about economic growth in a responsible way that creates jobs — and Kearny Point is meeting that challenge.”

Kearny Point is the modern answer to developing the new economy, Neu said, made possible by the scrap metal trading business her late husband, John Neu, started with his father, Hugo Neu, in 1947.

Through various subsidiaries, Hugo Neu Corp. had developed more than 9 million square feet of industrial properties in New Jersey, Pennsylvania and California over its many decades in business, including the former Federal Shipbuilding and Dry Dock Co. warehouse and distribution facilities in South Kearny.

When Hurricane Sandy left the site under four feet of water in 2012, the Neus decided to demolish and construct newer industrial buildings for distribution and logistics purposes. But with the passing of her husband in 2013, Wendy Kelman Neu, who had been working for Hugo Neu Corp. since 1980, unexpectedly assumed complete control of the historic riverfront site.

Neu ultimately decided to partner with Steve Nislick, former CEO of Edison Properties and now chief financial officer of Hugo Neu Corp., to reposition the company to invest, build and manage innovative businesses in recycling and real estate, starting in 2015 with the renovation and construction of four floors of flexible-use office space between 200 and 3,000 square feet at Building 78, a 200,000-square-foot building at Kearny Point.

Starting at nearly $500 per month, small to medium-sized businesses now have 24/7 access not only to high-quality, scalable office space in which to grow, but also coworking space, rooftop event space, a café and bar, internet technology services, printer, scanner and copier services and package delivery and receipt services for a fraction of the cost of what they would find in New York City, Newark, Hoboken or Jersey City, Nick Shears, director of leasing and marketing for Hugo Neu Realty Management, said.

Having reached more than 95 percent occupancy within a year and a half without the use of brokers in 2017, Building 78 at Kearny Point now hosts more than 200 businesses and nearly 500 employees, Shears added, with the majority of tenants being women- and minority-owned companies.

Building 78 has proven so successful, in fact, that an annex consisting of 90,000 square feet of small flexible-use office space is currently being constructed to expand the building’s footprint by the end of this year.

According to Hugo Neu Corp. representatives, subsequent phases of the project will also involve the renovation and demolishment of older buildings on-site to create more than 3 million square feet of WELL AP-certified flexible-use office space ranging from 200 to 10,000 square feet; the construction of a gathering hall with retail and dining components; a waterfront park and living shoreline at the confluence of the Hackensack and Passaic Rivers; an outdoor amphitheater; and more than 25 acres of open space for both the tenants and the public.

“But this is much larger than 130 acres,” she said. “What we hope to do here is create a model in Kearny that then will be transferable to other locations.”

Tools & Tiaras: How (and why) female union member started construction...